14 Wine Sauce Recipes for Chicken, Pasta, and Basically Everything 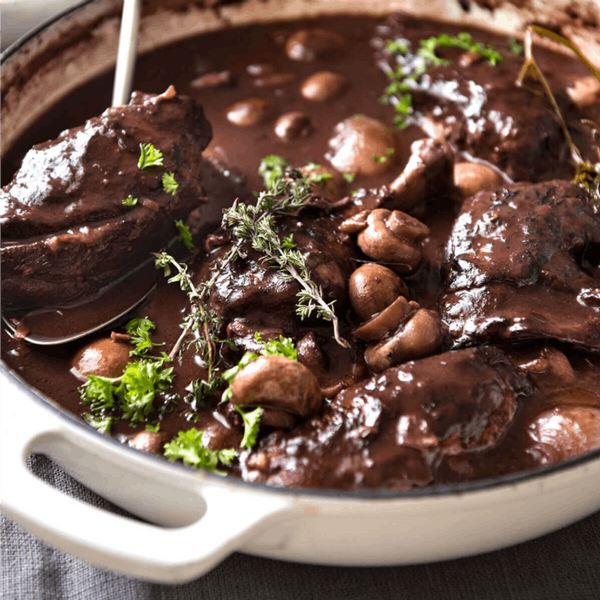 If there’s anything a foodie loves as much as food, it’s wine. Combine the two obsessions and it’s basically a love fest of epic proportions. There’s a reason why so many classic French recipes call for wine to deglaze the pan. These reduction sauces can really take an everyday meal up a notch. And the presentation is — ooh la la! So break out the vino, because these 14 red and white wine recipes are something to “cheers” to.

This super meaty sauce that calls for ground beef, pork sausage, AND pancetta is based on a timeless classic recipe. But doing all that simmering in the slow cooker while you do other stuff is pure modern-day genius. (via Kevin Is Cooking)

Julia Child was well known for introducing French classics like coq au vin to the American dinner table. This recipe is so impressive, yet easy-peasy to pull off, with no fancy ingredients, no tricky techniques — just a little simple wine deglazing you’ll find yourself going back to any time you need a sauce. (via RecipeTin Eats)

So many recipes seem to leave pork chops bone dry, but not this baby. This wine sauce is so good, you may be inclined to slurp it through a straw. (via Kitchn)

This one’s for the TRUE meat-lovers in the house. A rich cut like oxtail just begs for somewhere soft to land, so serve it up with fluffy mashed potatoes, fragrant rice, or creamy Parmesan polenta and it’s all good. (via Bibby’s Kitchen at 36)

Double-dipping, anyone? This bucatini is a double-wine bonanza. It’s first cooked in wine, then sautéed in a red wine garlic sauce. (via Running to the Kitchen)

When you’ve got a palate at the table to impress, snag yourself some lamb shanks. Slow cooked in a dutch oven, they’re stunning to the eyes AND the taste buds. (via RecipeTin Eats)

This beef cooks in one pan and is ready in under an hour. But it’s the white wine sauce you make from the drippings that’s the real star of the show. (via Half Baked Harvest)

Beef cheeks are a budget cut of meat, but no one would ever guess with this recipe. The braising liquid that results from slow cooking the meat infuses the sauce with rich, savory flavor. (via RecipeTin Eats)

If you prefer whites over reds, you will LOVE this recipe. As you deglaze the pan, breathe in that aroma of garlic and fresh thyme. It’s like eating twice. (via Eazy Peazy Mealz)

This one’s for the vegetarians in the house. White wine and brown butter could very well be THE sauce you’ve been waiting for all your life. (via Brewing Happiness)

You can’t go wrong with a petite but primo cut like filet mignon, and cooking with wine adds wonderful depth of flavor. Sometimes good things do come in small packages. (via Natasha’s Kitchen)

Which is more yummy, cooking with wine or drinking it? It’s a toss up, but it’s hard to imagine anything tastier than THIS sauce on top of mashed potatoes. (via Jo Cooks)

Does cooking with lamb intimidate you? In many countries it’s more popular than beef. Click through for a video that’s just like having a friend in the kitchen to show you the ropes. (via Brazilian Flair in the USA)

Looking for a romantic quickie — of the foodie kind? This 20-minute recipe includes a sauce that blends sweet cherries and wine and will melt your bae’s heart. (via Iowa Girl Eats)
Sally Jones
Sally Jones is a writer and editor living in New York City. She has worked at many websites including iVillage, Ladies Home Journal, More, Parenting, Cosmopolitan, The Knot and YourTango, in jobs ranging from editor to COO. Renovation and interior design are her unhealthy obsessions hobbies. She has renovated every home she's lived in, including the rentals, and like... whoa, who does that? You can catch her at her blog Renov8or.
Dinner Recipes
Recipes
Dinner Recipes recipe roundup
The Conversation
Reviews:
More From Recipes