12 Gravy Recipes That Will Float Your Gravy Boat 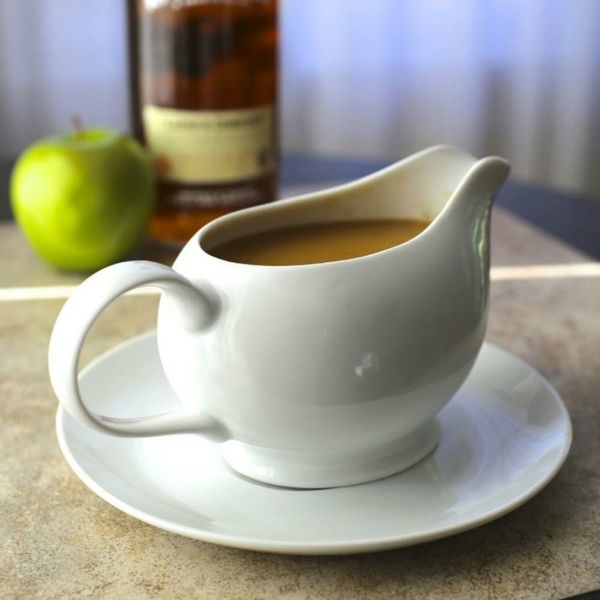 When preparing a traditional Thanksgiving spread, including the classics is *hella* important. The turkey is a given; a heaping pile of stuffing is mandatory, and fluffy mashed potatoes cannot be snubbed. However, no matter how appetizing these classic TG components are, they aren’t complete without being drowned in gravy, baby. So grab a pot and ditch the powdery stuff. We’ve got 12 mind-blowing recipes that will send you off the rails on a gravy train.

1. Caramelized Onion and Apple Cider Gravy: Considering gravy is a staple at every Thanksgiving feast, it’s not something you want to muck up; no one should have to eat naked taters and stuffing. This easy and tasty gravy brings cider to the equation, and it’s mostly made in the slow cooker. Foolproof! (via Oh My Veggies)

2. Make-Ahead Turkey Gravy With Calvados: If you’re one of those superstars that plans ahead and gets it done, this gravy is right up your alley. If you’re not one of those people, this gravy will convert you by lightening your Thanksgiving load DAYS before. (via Nerds With Knives)

3. 911 Vegan Gravy: When you’re living off of a plant-based diet, creativity in the kitchen is crucial — especially around the holidays. Gravy is an important part of Thanksgiving dinner and, as we know, it isn’t just a condiment. But vegans don’t miss out, and this recipe proves it. (via Fat Free Vegan Kitchen)

4. Homemade Turkey Gravy: If you’re keen on using turkey drippings to whip up your gravy, this savory recipe is a dream. Pile your plate high and drizzle this shizzle all over that TG goodness. (via What’s Gaby Cooking?)

5. Vegan Red Wine Gravy: You know what would pair amazingly with your glass of red wine at Thanksgiving dinner? Red wine gravy slathered all over your food. This tasty gravy is rich and infused with sweet veggies and herbs. (via A Virtual Vegan)

6. Perfect Gravy Without the Bird: Thanksgiving dinner is bomb, but it can’t compete with the feeling of enjoying leftovers in peace and quiet the next day. No company, no chaos — just you and a plateful of delicious eats. Though gravy doesn’t usually make it to the next day, this broth-based recipe has your back. (via The View from Great Island)

7. Beef Gravy With Red Wine: It would be wrong of us to assume that turkey is the *only* meat being cooked over the holidays. If your family likes to switch it up and rock beef, we’ve got a gravy for that. It’s rich with deep flavors and a very generous splash of red wine. (via Cooking Is Messy)

8. Caramelized Onion Gravy: Miss out on gravy? Vegetarians? NEVER! Caramelized onions bring way more flavor to gravy than traditional drippings. Don’t be shocked if the meat-eaters in your family opt for this gravy over the meat-y type. (via Oh My Veggies)

9. Turkey Gravy: Some folks like to get creative and stray from a classic, while others prefer to remain loyal to the tried and true. If the latter sounds like you, this classic turkey gravy is exactly what you’re looking for. (via Oh So Delicious)

10. 5-Minute Maple Bourbon Gravy: This quick and delish gravy is a godsend — especially in a pinch. With just a few simple ingredients from your pantry, you can whip up a gravy that will be ALL the rage. It’s customizable too, so if you’re not down with bourbon, skip it. But really, now… (via The Suburban Soapbox)

11. Shallot and Shiitake Gravy: This mouth-watering gravy is a total dream for anyone who prefers fullness and texture in their sauces. The reduced mushroom stock brings a flavor that could rival any ol’ classic turkey gravy. Bring it on! (via Oh My Veggies)

12. Beer and Sweet Onion Vegan Gravy: Adding beer to a recipe is something to be thankful for, so this gravy is perfect for TG dinner. This vegan recipe is jam-packed with flavor and will very likely become a fave. (via May I Have That Recipe?)

Dana Sandonato
Born in Canada and now living in the beautiful state of North Carolina, Dana is a coffee-reliant food writer with a healthy appetite, a taste for culinary adventure, a thirst for good beers, and an endless hunger for food photography. When not writing for Brit + Co, she can be found pouring herself into her blog-turned-webzine, Killing Thyme, or taste-testing at local breweries with her husband. Dana's ideal down time includes pizza, marathoning on Netflix, or watching her fave flicks from the 80s and 90s - no matter how great or awful they are!
recipe roundup
Recipes
recipe roundup Thanksgiving Recipes
The Conversation
Reviews:
More From Recipes