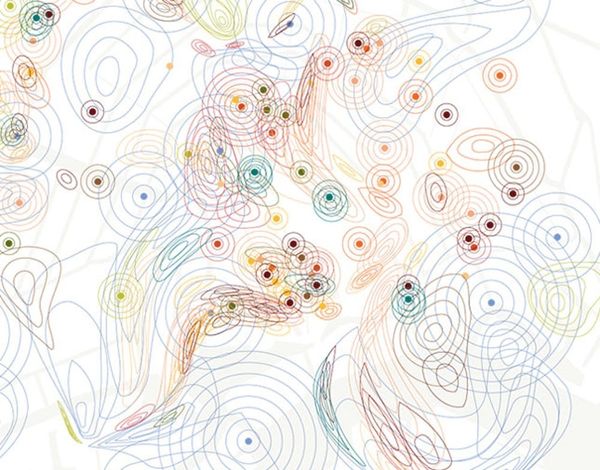 In many ways, city life is hard to beat. The museums, the great coffee, the endless brunch options… One definite downside of residing in the concrete jungle? The smells. Whether it’s a stinky trash can or rubbing shoulders on the bus with with the dude who hasn’t showered since 1970, we’re guessing “city aroma” probably isn’t going to be bottled up as a Febreze scent anytime soon. When we get an unpleasant whiff, our instinct is usually to book it until our nostrils are in the clear. But British artist Kate Mclean has us wondering if we might be going about it all wrong.

The multi-sensory artist and designer maps cities by smell. She and a fleet of volunteers take to the streets to embark on a “smell walk” and document all the scents they detect – good and bad. In a recently documented walk around New York City, over two dozen volunteers joined her as she roamed the sidewalks sniffing trees, trash cans, clothing and restaurants. After the walk is over, McLean collects everyone’s written descriptions. She then pinpoints the origin of the scent with a colored dot, and surrounds it with contour lines to show where the smells blow to in the wind.

In addition to NYC, McLean has also mapped major cities like Paris, Milan, Edinburgh, Glasgow and Amsterdam. Rather than the expected stench of marijuana you might expect in Amsterdam, she describes the aroma as “an abundance of the warm, sugary, powdery sweetness of waffles. Old books were detected in basement doorways and laundry aromas drifted up into the streets from Amsterdam’s many house hotels.” This has us seriously wishing smell-o-vision would be invented already.

This graphic style seems to be McLean’s trademark, but she has also created smell maps that are organized in other ways. For Milan she illustrated 3-D buildings and collaborated with scent designer Olivia Alice, who crafted smells which were emitted from the paper buildings through diffusers.

Never before would we have thought of that funky alleyway stench as an artistic sensory experience, but McLean has us seeing — er, smelling — things in a whole new light.

Which of these maps is your favorite? How would you map the smells in YOUR city? Sound (and sniff) off below!