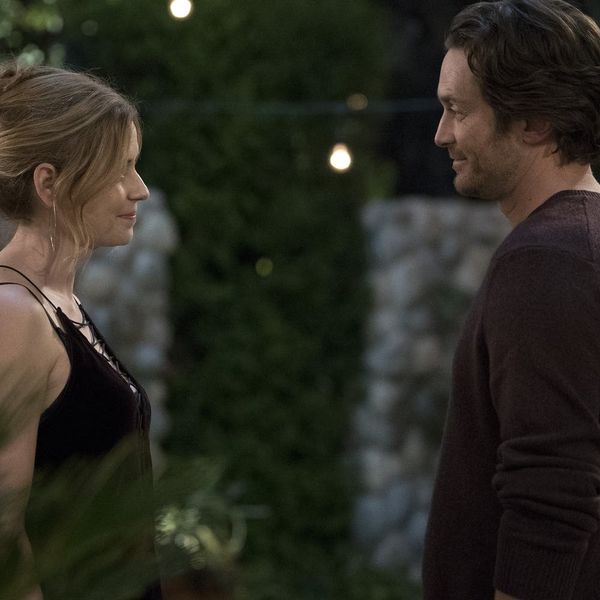 Jenna Fischer is a pretty cool mom — onscreen and off. Like her Splitting Up Together character, Lena, the actress relishes time with her family and tries to make even ordinary moments feel special.

“One of our new favorite things is having a picnic dinner, just in our yard,” she told Brit + Co of what she likes to do with husband Lee Kirk and their two kids, Weston and Harper. “We throw down a blanket and we take dinner outside, and we just have a picnic in our yard. It’s so lovely. And then we run around and play soccer or something afterwards. It just kind of makes dinner more fun.”

Fischer is all about saying yes to fun — she even partnered with Blue Bunny ice cream on a campaign to get people to do exactly that — and she brings that fun to everything she does, including Splitting Up Together, which was recently renewed for a second season.

Read on for more of her thoughts on motherhood, what she’d like to see happen between Martin and Lena, and the most (and least) adorable things about costar Oliver Hudson.

Brit + Co: So, you have two kids, and you play a mom on Splitting Up Together. Do any of your real-life mom moments ever make it onto the show?

Jenna Fischer: No, not yet. Maybe season 2!

B+C: Are you anything like Lena in real life?

JF: I am very much like Lena in real life. Because we’re both perfect and always right! So we’re like the same person. No, it’s funny because Oliver and I joke about it all the time. Because he says he’s like his character and I’m like his wife, and I’m like, well, I’m like my character and you’re like my husband. He’s happy to be spontaneous; I am not happy to be spontaneous. I like to plan, I like to think of every possible scenario, which is a lot like Lena.

But also like Lena, I love parenting. I love being a parent. I love making lists. I don’t make my own Windex, but I might. Lena made her own window cleaner in a recent episode, and I felt like I might do that. And I definitely bake from scratch. I love baking. No box cakes for me.

It’s another thing to do with the kids, you know? We love baking together. Kids love measuring and mixing and cracking eggs. There’s a lot of eggs that go on the floor, but that’s fine. It’s part of the fun.

B+C: What’s the most adorable thing about Oliver Hudson?

JF: Oliver is just sweet and funny and warm and open-hearted. He’s just a kind person. He just makes you feel good about yourself when you’re around him. He’s truly a treasure.

JF: [Laughs] The least adorable thing about him is… That’s a good question. I’m really having a hard time coming up with something. You know what? He should iron his shirts more. He really should. I feel like he could do with some ironing of his shirts. And I’ve told him that, so he’s not going to read it here for the first time.

B+C: You probably can’t give away any plot details, but what would you like to see happen between Martin and Lena?

JF: You know, I really like them together, but I’m not 100 percent sure they’re ready to be together. So what I would like to see is a little bit more growth from each of them, and I want to see them heal some of their past hurts and be able to discuss those hurts and resentments without it escalating so quickly. We had that episode earlier in the season where they start fighting in the kitchen, and there’s just still so much baggage for them. So I think I need to see them unload some of that baggage, and then I’ll decide if I think they should be together. I’m not convinced that that is the best thing. The thing that I want more than anything is for them to find just the healthiest, most positive way to have their family, if that’s together or that’s separate.

B+C: That seems like kind of the core of the show.

JF: It is, right? It’s about, what is the way that this family functions the best?

B+C: So, in addition to the show, you have a book, The Actor’s Life: A Survival Guide, which is kind of like a handbook for aspiring actors. If you could only give one piece of advice about the industry, what would it be?

JF: It would be to create your own work. Don’t wait around for someone to give you a job. Create things with your other artistic friends, so you’re always practicing, you’re always learning. That momentum is going to be the best thing possible for a young actor.

This interview has been edited for clarity and condensed.