11 Times the Kids from Stranger Things Gave Us Serious #Squadgoals 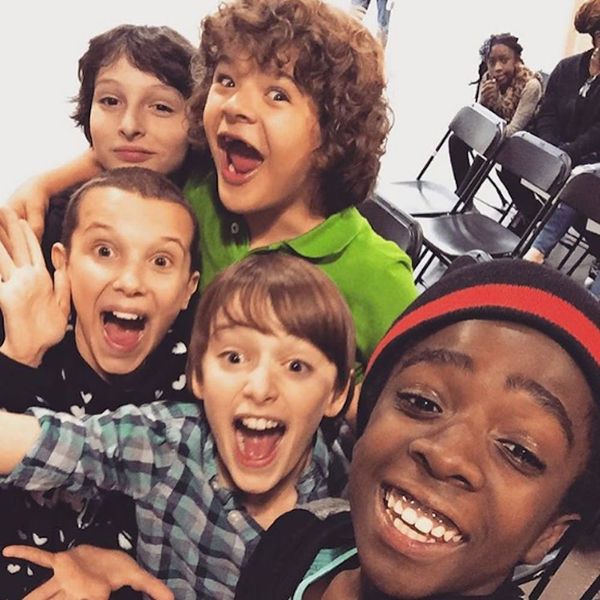 Netflix’s creepy series and surprise hit Stranger Things immediately became everyone’s summer binge-watch when it was released in mid-July, and we’re already impatient for new episodes and the release of an official spooky soundtrack. While the return of Winona Ryder, nostalgic ‘80s references and Upside Down World all helped hook viewers, it was the show’s young cast that cemented the obsession. It turns out the gang is IRL BFFs too — they show up all over each others’ Instagram feeds, and look like they have SO much fun together. Here are just some of the reasons that they are the official #squadgoals of 2016.

1. They support each other in all their work.Millie Bobby Brown, aka Eleven, went to see The Peanuts Movie with the adorable Price twins, who play Mike’s little sister Holly, and Noah Schnapp, who plays Will. Noah is also the voice 0f Charlie Brown in the Peanuts Movie.

#tb to the @strangerthingstv wrap party. Miss my 2nd family way too much.

2. They consider each other family.Finn Wolfhard, aka Mike, is currently filming the remake of Stephen King’s spooky clown flick It, and while he posts lots of pics with the cast and on set, he often throws it back to his time with his “second family.” Here they are at the bowling alley wrap party.

You guys are awesome!! Had to repost because I love this picture!! Thanks for making me smile everytime I step onto the set. You guys are the best. I loved the screening for episode one!! Isn't it crazy that it's finished!!? Anyway, thanks for being awesome guys. @gatenm123 @therealcalebmclaughlin @finn_wolfhard @milliebobby190204 @milliebobbyb

3. They keep each other laughing. “Thanks for making me smile every time I step onto the set,” Noah (Will) writes. “You guys are the best.”

4. They experience important life events together, like starring in a hit Netflix series, sure, but also seeing the new Star Wars together, as seen here in Gaten Matarazzo’s (aka Dustin) ‘gram. “Watching Star Wars with the best yesterday!” he captioned the pic of himself, Millie, Finn — and even Peyton Wich, who plays one of the show’s bullies.

6. They love Barb as much as we do.Shannon Purser — aka Barb — played the awkward, geeky best friend to Nancy Wheeler, and despite (or maybe because of) her short role and tragic end, has become a cult fan favorite. The cast seem to appreciate her just as much. “Baaaaaaarbbbbbb!!!!!!!,” Millie captions this snap. “Shoutout to @shannonpurser she is awesome!!!!”

7. They’re always giving each other props. “Funniest guy I know,” Noah says of his co-star Gaten, before shouting out his time on stage in Les Mis. “And he sings!!”

8. They spend most of their time together goofing off. Same.

10. They’re comfortable enough with each other to hang out on their phones in silence together. The truest test of real friendship.

11. They just love each other SO MUCH. Squad goals forever.

Do you have a favorite Stranger Things character? Tweet us @BritandCo!