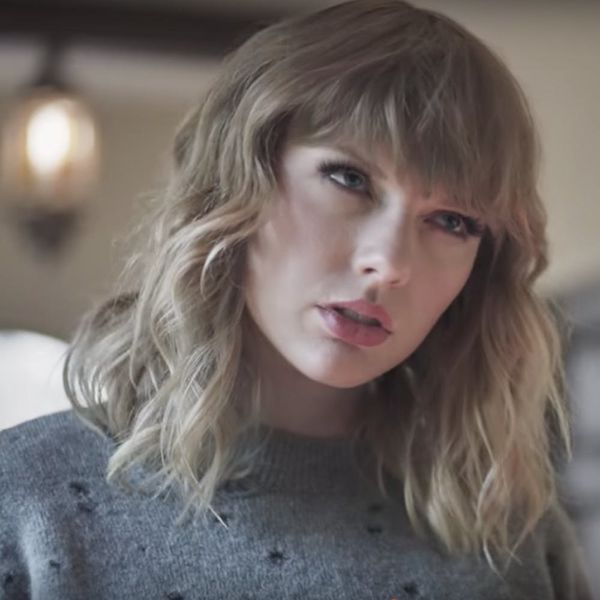 After months out of the spotlight, Taylor Swift is suddenly everywhere again, hitting us fast and hard with her new singles — almost as fast and hard as she hits Andy Samberg in this new ad for AT&T. Seriously, she kicks the dude right through a wall.

As part of Swift’s major partnership with the brand, AT&T is launching the Taylor Swift NOW experience, which will feature “never-seen Taylor videos,” as well as an “inside look at her life” and “unique content spanning her entire career.” To promote the experience, the singer filmed a commercial showing a day in her life. The day doesn’t go how you might think it would, though.

It starts out ordinarily enough, with Swift strumming her guitar in the studio, petting her cat Olivia Benson, munching on “one of those kale rice bowl thingies,” checking her phone, and watching videos online. But then she bumps into Samberg — or, as she calls him, Andy Sam-jerk — in the hallway, and things get a little weird.

They proceed to have a stare-down, a thumb war, and a caricature contest before getting into what the narrator calls an “unbelievable choreographed fight sequence,” complete with slow-motion acrobatics. “Now Andy is asking for a time out to catch his breath,” the narrator says. “Now Andy is flying through the wall.”

From there, Swift heads to the kitchen, where she finds and snacks on some cookie dough (mmm!) and then hides in a closet when the rightful owner of said cookie dough comes looking for his food. Naturally, she gets locked in and has to crawl through an air duct to freedom.

Swift shared an edited version of the ad to her Instagram account, along with a longer look at her time with her beloved cat. As they snuggle, the singer asks her kitty “some real tough questions,” including: “Are you a sabertooth tiger cub? Are you my baby wolverine? Are you the princess of Meow Town?” Aaaand on and on.

Some real tough questions I had for Olivia.

The “Look What You Made Me Do” singer also gave fans a behind-the-scenes look at her behind-the-scenes ad (meta!), adding the message, “Such a taxing day when they’re like ‘eat some cookie dough’ and you’re like ‘ok I’ll make this sacrifice for my art.'” Yeah, sounds rough.

What do you think about Taylor Swift’s AT&T commercial? Let us know @BritandCo!

Desiree O
Desirée O is a ‘Professional Bohemian’ who loves anything and everything related to the arts, entertainment, and pop culture. She ADORES being a ‘Newsy’ for Brit + Co, covering all of the latest tidbits of awesomeness that you want to read about. When she’s not writing, she’s either making messy art, going on long adventurous walks with her camera, or poking around over at bohemianizm (http://www.bohemianizm.com/). You can find out about Desirée O and her work at http://DesireeO.com/ or follow her on Twitter @DesireeO.
Taylor Swift
Pop Culture
Taylor Swift