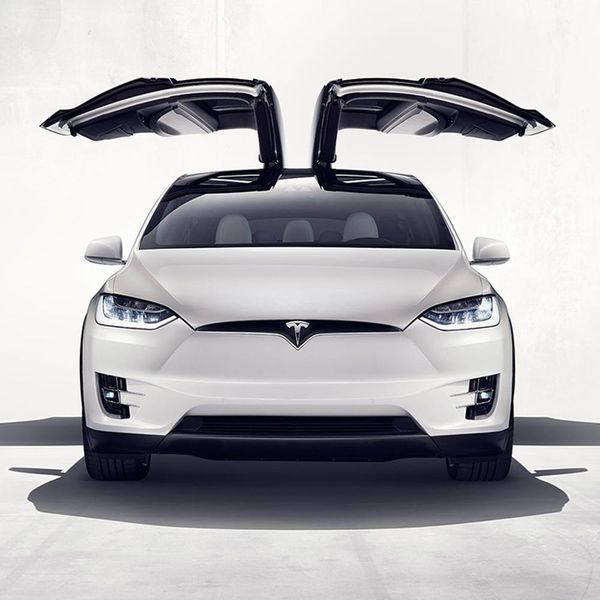 Even if you’re not a car person, you’re probably going to be pretty impressed with Tesla’s newest car Model X. The American automobile company, known for their all-electric take on luxury vehicles, has recently revealed all the deets on their newest environmentally-friendly four-by-four SUV. First of all, the car is 100 percent vegan (!!). Sorry, Apple Car but it looks like you have some tough competition to outdo.

Aside from being totally vegan, the coolest feature is probably the car’s “falcon doors.” Unlike the typical sliding doors you might find in a classic mini van, Tesla’s Model X has decided to dive straight into the future with upward opening doors that automatically lift over the car, thereby allowing easy access to the second row of seats. Genius!

It might seem like an improbable design concept to use anytime you’re parked between two cars, but during a demo Tesla actually showed the audience that the doors only extend about a foot away from the vehicle and can easily be operated in a tight space.

If that’s not impressive enough, the Model X comes equipped with a medical-grade HEPA filter that removes pollen, bacteria, viruses and pollution from the inside. It looks like this might be the first car you drive in where you actually don’t want to roll down the windows once you hit the open road.

Taking their environmental mission one step further, the new SUV also comes complete with a vegan alternative to the classic leather interiors. By selecting the “Ultra White” option on Tesla’s site, your modern day Batmobile will come with sustainable and environmental-friendly steering wheel, gearshift and seats. Ahh, pretty and good for the environment? Sold!

Cortney Clift
Cortney is the senior writer and special projects editor at Brit + Co. She typically covers topics related to women's issues, politics, and lifestyle. When she's not buried behind her computer you'll find her exploring New York City or planning her next big adventure.
Tech News
Tech
Tech News
More From Tech