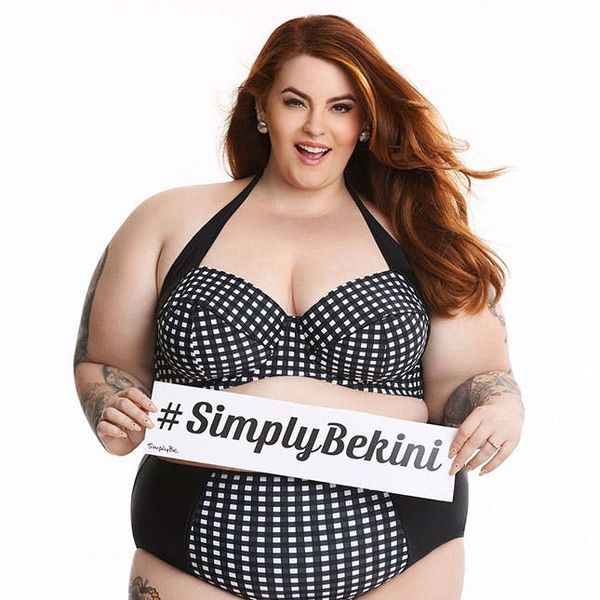 The most cringe-worthy term of the summer has long been “bikini body,” a baggage-filled phase that often fuels uncomfortable and unrealistic ideals of what women’s curves should look like before they sink their toes into the sand. Leave it to body positive pioneer + model Tess Holiday to turn that phrase completely on its head. The 5’5” size 22-model, who has advocated to reclaim terms like “fat” and “plus” in the past, was tapped by plus-size retailers SimplyBe to put an empowering spin on the phrase in an instructional video titled “How to Get a Bikini Body With Tess Holiday.” And the process — just a single step — might totally shock you.

As the 15-second clip starts, the People cover girl, pouts her lips pensively after being asked the dun-dun-dun-inducing Q and, soon after, the “ah-ha!” moment occurs. The answer doesn’t involve detoxing diets or fast-toning workout routines, it’s way simpler (and much sassier) than that. To get a bikini body, put a bikini on your body. Tess steps back out on screen in a girly mix-and-match two-piece looking as fierce as ever.

“There is no such thing as a perfect body and the hardest barrier for women to overcome is themselves,” Tess said in a statement on SB Edit. “And no wonder, considering the skinny body ideals that are portrayed widely across the media today.” But this year more than ever, that’s changing for the better. Just last week, Lauren Conrad announced that her lifestyle website would ban body shaming terms for good, showing an ever-growing sensitivity in the public eye among boundary-breaking milestones like Tess herself being the first girl of her size to land a major modeling contract and Sports Illustrated including its first-ever plus-sized model in the pages of this year’s Swimsuit Edition.

Like other recent all-size-inclusive initiatives, like Lane Bryant’s #ImNoAngel campaign and Tess’ own #EffYourBeautyStandards, this one isn’t complete without a body positive call-to-action packaged in an easy-to-Tweet hashtag. “I hope #SimplyBekini inspires women to love themselves and their wobbly bits,” Tess said in the same statement. It looks like summer 2015 is shaping up to be the summer of confidence.

What makes you feel confident in your own curves/skin/bod? Keep the encouraging vibes coming and leave a body positive message in the comments below.