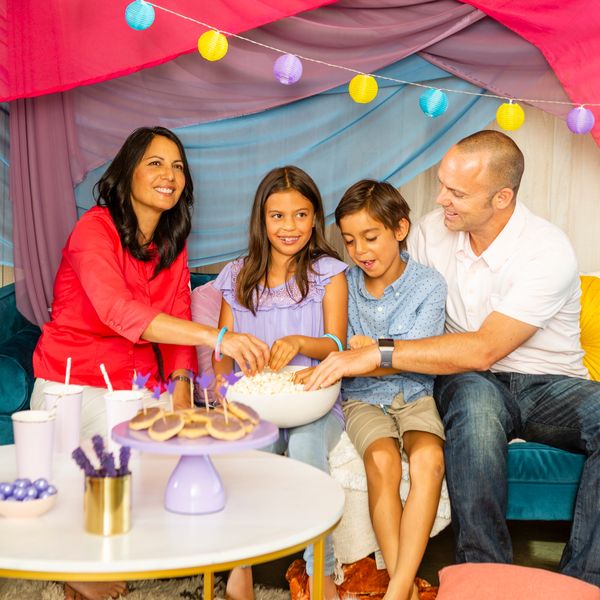 Most of us at Brit + Co are in the G-rated stage of raising kids (so basically Frozen and Toy Story are on repeat) but of course we can't wait to share some of our favorite classics as they grow up. Yet the Motion Picture Association rating system is super vague and sometimes even a G movie can seem over the top in terms of cover-your-eyes scenes. Common Sense Media is a great (non-profit) resource for choosing age-appropriate movies, books, YouTube videos, apps, even what's on Netflix and Amazon Prime. Charlie and the Chocolate Factory, new and old? 8+. Ferris Bueller? 12+. Greta Gerwig's Little Women (we can't wait!)? 10+. You can even plug in your kiddo's age and get CSM's tailored picks (for a small donation).

We heard from one of the dads in our 'Co, Josh Braff, author of The Daddy Diaries, about this very topic. At age 9 his daughter decided her favorite movie was The Shawshank Redemption. (We can't even.) Here's his amusing and touching take on sharing his favorite classics with her (#girldad) and the experience of having kids approach the age for the heavy stuff.

My Nine Year Old Daughter Is Ready for Jaws

My daughter turns 10 soon. Her bedroom is violet with unicorn-ish bedding and a cotton candy lamp shade. Her hair-ties shimmer of glitter and some of her socks do too. She laughs a lot and tells me it feels good to do so. Her addition to our family chemistry is immeasurable, her desire for the tips of her hair to be blue, immense. She's an admitted movie buff and has begun to hunger for dramas. This leaves her mother and I to discuss ratings and content, what might be too much to absorb. Life and death is in every drama. How early is too early to understand mortality.

The Shawshank Redemption is her new favorite movie. She found it on her own. I race visually through the film, hoping I don't recall stabbings, sex or misogyny.

"Favorite movie, Dad! Of all time."

I knock on her door. She's watching it again, headphones in. I attempt foolishly to snuggle with her, as we've done a million times. She growls and turns her back.

She makes room for me to watch too. Morgan Freeman walks the beach of Zihuatanejo

as a 40 piece orchestra plays out the size of the story, it's ending.

"You know what I love about this movie?" my daughter says.

"The music. It's so important, ya know, to the scenes. They'd have less meaning without it."

There is solace in her precociousness, the tone we find to speak of this art, however small it is in the scheme of life. When she was ready to watch Jaws at the age of eight, we let her. The characters were rich, the hype of the monster overblown. When it ended she announced it was her new favorite movie, "Of all time."

Within minutes she'd begun to build not only the shark but the entire cast out of Legos. When Lego Richard Dreyfus was complete, we put him on the raft at the end, kicking hopefully towards shore. I tuck her into bed and we discuss this moment. Richard and Roy Scheider are floating on a piece of the destroyed boat. The sky can be seen, so freeing, and the sun is out. They will survive. The music is relieved, light and airy, and the possibility of a long and lasting life is seen in the splashing of their feet.

"You know they're going to be ok," she says.

"Let's watch something else tomorrow," she says. "Think of a good one. I'll think too. What's that one you mentioned, Harold and something?"

The next day we watch Harold & Maude. The film is rich with humor and pathos and has a Cat Stevens soundtrack throughout, leaving each scene dripping with the most tender of his lyrics. I look at my daughter, minutes before Ruth Gordon takes the fatal pill that stuns the viewer with her sudden suicide. I feel guilt, a bit, for where her heart strings will be dragged. It's a lesson, surely, for a lover of stories, to witness the fragility of humans from a safe distance. How do I keep Harold and Maude from a girl who loves characters, and viscerally charged denouement.

Maude takes the pill, Harold cries with pain, he hollers, races her to the hospital. Cat Stevens sings the song, Trouble as Harold's Jaguar/hearse revs high over the wailing sadness of his voice.

Trouble/trouble set me free/ I have paid my debt now won't you leave me in my misery. I haven't got a lot of time. I have to go there. Just let me go there.

My daughter's eyes are filled with tears. She does not look at me, just stares ahead, wipes her cheeks. The film ends with Harold playing the banjo Ruth gave him. The love of his life is gone. But he is alive. As with Jaws, the ending is a flash of optimism, occurring in the waning quiet that follows a human nightmare. My daughter is silent. We don't say anything until we reach her room. I pull her blanket up to her chin.

"Harold looked like one of the Beatles," she says.

"That was funny but very sad."

"I loved it. But it made me really sad."

"I think you'll like it. There's this gopher in it. They use a puppet."

"It's a classic comedy."

"What's that other movie you said?" she asks.

"I don't know, I'll think about it. I'll find some better comedies."

"I like real movies," she says, turning on her side.

I recall the story, the dead body on the train tracks.

"Let's talk about it tomorrow," I suggest.

"Yes," I say. "Very. This group of boys go on an adventure. Have you seen, Home Alone?"

She sits on the edge of the couch as the swirl of Stand By Me unfolds and the young boy's body is found aside the railroad tracks.

"Incredible," she says. "I loved it. I think it might be my favorite movie of all time."

I tuck her in afterwards and await her critique.

"That boy. I wonder what it's like to stop breathing," she says. I hear her take a deep breath and hold it. I wait and wait. She finally blows it out and tries to catch her breath. "Dad?"

"I love that idea. Time to laugh."

"Tell me about the gopher in Caddy Shack."

"Oh, it's hilarious. He lives underneath the golf course and torments Bill Murray. You'll crack up."

"They use a puppet?"

"I want to watch movies with you FOREVER."

I lean to her in the dark and end up kissing the top of her ear. "Forever and ever."