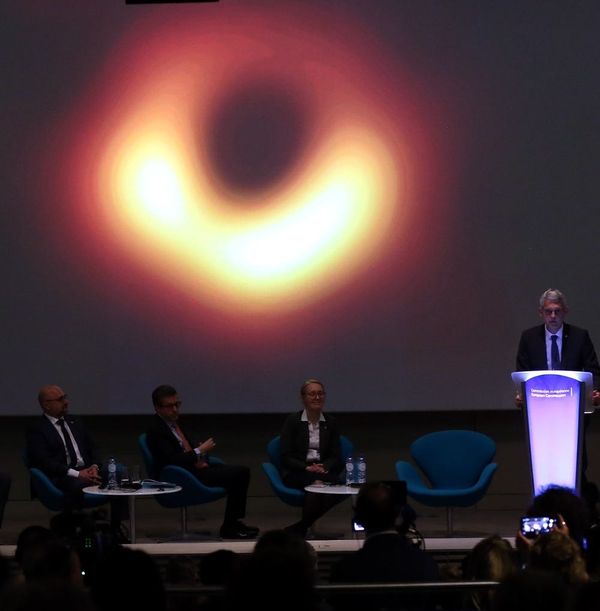 UPDATE (April 12, 4:45pm EST): We got some details on this story a bit wrong. In this post here, we set the record straight. Read on for the original story below:

Massachusetts Institute of Technology post-doctoral student Katie Bouman isn’t an astronomer, but she played a pivotal role in taking the first-ever photograph of a black hole.

That historic first snap was revealed to the public on Wednesday after years of work on an international project called Event Horizon Telescope. Bouman, a computer scientist, took the lead on creating the algorithm that made it possible to take the photo 55 million light-years away from Earth.

According to the Event Horizon Telescope website, “This long-sought image provides the strongest evidence to date for the existence of supermassive black holes and opens a new window onto the study of black holes, their event horizons, and gravity.” In layman’s terms, this could change everything about how we think about the universe. NBD.

3 years ago MIT grad student Katie Bouman led the creation of a new algorithm to produce the first-ever image of a black hole.

Today, that image was released.

Though the photo has only been available to the public eye for a few hours, it was taken using a worldwide network of powerful telescopes back in 2017. The image of the black hole was taken in a galaxy known as M87, where, for 16 years, astronomers observed stars rotating in an orbit. Scientists observing the stars determined that they were rotating around a supermassive black hole, and it is that black hole the whole world is now getting a glimpse of, in large thanks to Bouman’s contributions.

To understand exactly where Bouman’s research fits into this, here’s a little background info. What we can see in the photo — a small, glowing ring — is really the “event horizon,” or the boundary around a black hole. The dark space in the middle of the image is a shadow cast by the hole. Technically, the image we’re seeing is not really a “photo,” but is rather an image pieced together using data fed to the algorithm.

“This shadow, caused by the gravitational bending and capture of light by the event horizon, reveals a lot about the nature of these fascinating objects and allowed us to measure the enormous mass of M87’s black hole,” Event Horizon Telescope Science Council chair Heino Falcke told CNN. M87’s black hole is one of the largest visible black holes from earth, and has a gravity 6.5 billion times greater than the Earth’s sun.

While the image of the black hole, small and blurry though it is, may seem insignificant on its surface, Bouman explained in a 2017 TED Talk that the Event Horizon Telescope project’s work also helps confirm Einstein’s theory of general relativity. Einstein made predictions for what the size and shape of black hole event horizons look like, Bouman explains in the talk, “so taking a picture of it wouldn’t only be really cool, it would also help to verify that these equations hold in the extreme conditions around the black hole.”

In essence, this image confirms what had previously only been proved in theory. It’s a huge breakthrough for astronomy and physics — and it was made possible by Bouman’s algorithm.

Elizabeth King
Elizabeth King is a politics, history, and culture writer based in the Twin Cities. She is generally pretty cranky but still enjoys traveling, music from the early 2000's, and plotting the resistance. Feel free to say hi on Twitter at @ekingc or check out some of her work at www.elizabethcking.com.
Science
Current Events
Science STEM
More From Current Events