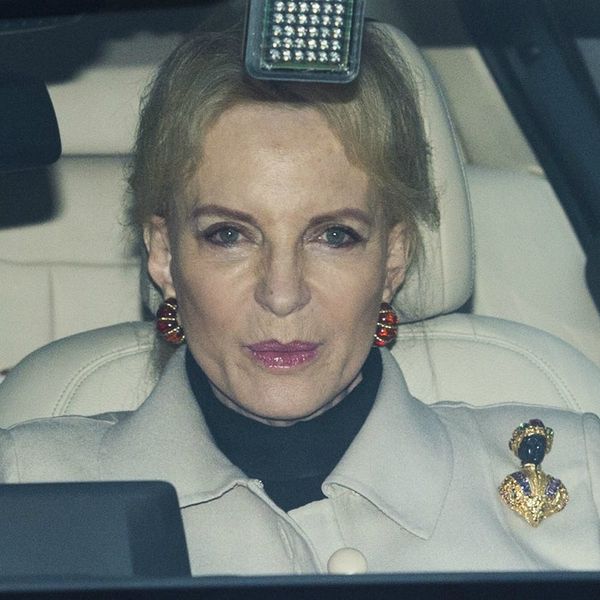 UPDATE (December 22, 3pm ET): Princess Michael of Kent responded to the controversy in a statement to People, saying, “The brooch was a gift and has been worn many times before. Princess Michael is very sorry and distressed that it has caused offense.”

If you haven’t heard the name Princess Michael of Kent, we wouldn’t blame you. Marie Christine von Reibnitz is married to Queen Elizabeth’s cousin, Michael of Kent, and since she has no official title, she takes her husband’s title and name officially.

During the Queen’s annual Christmas lunch this week, however, this lesser-known royal jumped into the spotlight after showing up to meet Prince Harry’s mixed race fiancèe, Meghan Markle with a racially insensitive brooch in an outdated style known as “Blackamoor.”

Blackamoor decorative arts date back to the 19th century, and is a style that depicts Black people, usually as slaves, in a pose or position of servitude. Most often, Blackamoor arts included small sculptures of slaves holding plates and trays for practical use around the house, but also include jewelry, like the brooch Princess Michael chose to wear for the Queen’s lunch.

The Princess’ brooch depicts a bust of a Black person wearing an embellished turban and matching bejeweled tunic. While this may have been an oversight on the part of the luncheon guest, many are pointing out that even wearing a racially charged piece of jewelry in 2017, never mind at a luncheon which includes the first non-white soon-to-be member of the royal family is just downright wrong.

Twitter users were shocked at the Princess’ sartorial choices, and had some harsh words for the royal.

A not-so-fun fact is that Princess Michael of Kent's father was an actual Nazi officer. He joined the Nazi party THREE YEARS before Hitler came to power so it's not as if he was pressured. He was just racist filth. https://t.co/d4KoLBmhJQ https://t.co/xh4wh837Qo

Has no one noticed the Blackmoore pin that Princess Michael of Kent is wearing? Really? #MeghanMarkle offically meets the family and is greeted by THIS? #racism #BritishRoyals pic.twitter.com/o0BiaxdR9n

Shout out to Princess Michael of Kent for always being hideously racist. Can’t wait to see what the UK papers have to say about her choice of brooch today.

This isn’t the first time Princess Michael of Kent has been in hot water for being openly hostile towards non-white people. In 2004, she reportedly yelled at Black diners in a high-end restaurant in New York City, instructing them to, “go back to the colonies.” When she was confronted with the accusation, she responded by saying she couldn’t be racist because of her love of Black people. “I even pretended years ago to be an African, a half-caste African, but because of my light eyes I did not get away with it, but I dyed my hair black,” Princess Michael said.

“I traveled on African buses. I wanted to be a writer. I wanted experiences from Cape Town to right up in northern Mozambique. I had this adventure with these absolutely adorable, special people and to call me racist: it’s a knife through the heart because I really love these people.”

What do you think of Princess Michael’s brooch? Tell us @BritandCo!

Kat Armstrong
Kat has been a writer, social media maven and mom for longer than she's willing to admit. She's also spent time in front of and behind the camera, interviewing celebs, politicians and acting as a producer for fashion and artistic photography shoots. When she isn't writing for various orgs and publications, she's hanging with her kids, husband and French Bulldog, Peter, in Toronto, Canada.
Controversy
Current Events
Controversy Royal Family