These Photos of Rio After the Olympics Are Depressing AF 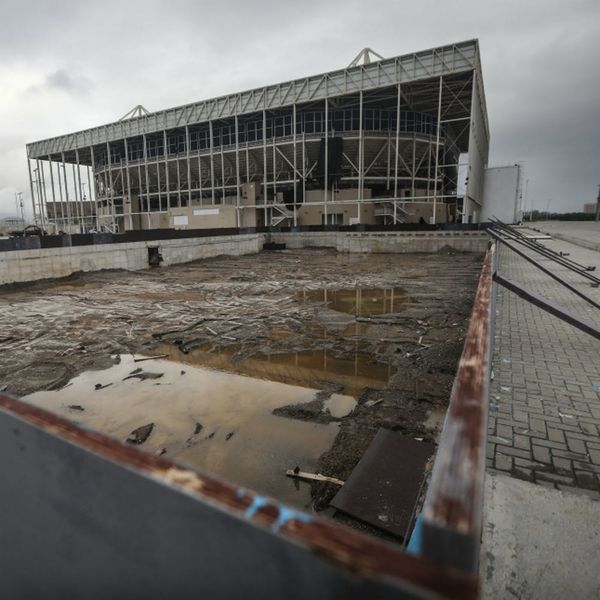 If you’ve ever wondered what happens after The Olympics end, look no further.

Generally speaking, when we talk about The Olympics, it’s about the sense of community, the pride in your team, and the uniforms that each nation rocks during the opening and closing ceremonies. What is more of a dirty little secret, however, is what happens to many major cities post-Olympiad. While cities like Vancouver planned ahead and built structures that would benefit them long term, many other host cities simply do not have the ability to do the same in a meaningful way.

Photographer Mario Tama has taken a trip through Rio’s now-abandoned Olympic village, and the photos are depressing (to say the least). He has perfectly captured what so many other cities in the history of The Olympic Games have faced. Less than seven months after the games have ended, practice swimming pools (above) are filled with stagnant water and debris, instead of being used by the city’s inhabitants.

With wild dogs roaming parking lots, the Rio site looks like something out of a desolate future wasteland zombie movie.

Many host nations actually face bankruptcy after the games, and if these photos are any indication, Rio is probably not faring very well. Just take a look at that rotting golf course.

Business Insider reports that part of the problem at the Rio site does in fact stem from a lack of money. With no business or organization to foot the bills, the sites are abandoned and rotting or in disrepair.

Have you ever visited an abandoned building? Tell us about your creepy encounter @BritandCo!

Kat Armstrong
Kat has been a writer, social media maven and mom for longer than she's willing to admit. She's also spent time in front of and behind the camera, interviewing celebs, politicians and acting as a producer for fashion and artistic photography shoots. When she isn't writing for various orgs and publications, she's hanging with her kids, husband and French Bulldog, Peter, in Toronto, Canada.
Olympics
Pop Culture
Olympics
More From Pop Culture