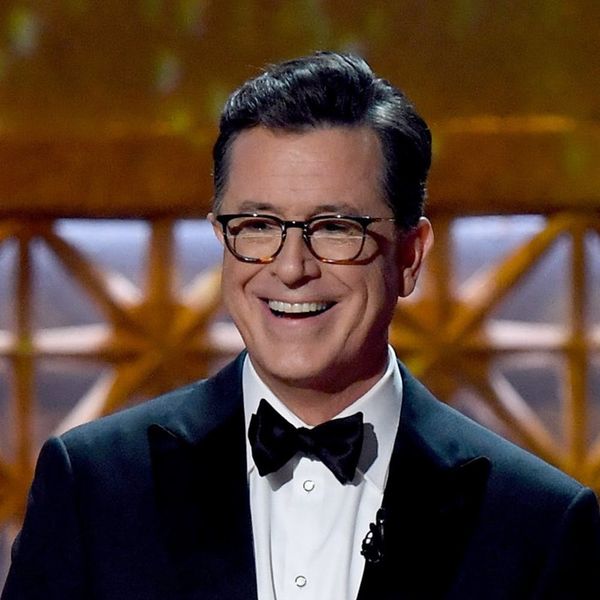 Plenty of celebs have stepped up to generously donate to hurricane relief funds intended to help victims recover from the devastation suffered from recent hurricanes Harvey, Irma, and Maria. Now, following damage Puerto Rico sustained after Category 4 storm Maria swept through on Wednesday, TheLate Show host Stephen Colbert has teamed up with actor Nick Kroll to give us the most unique celeb fundraiser yet: incredibly awkward puberty pics.

Obviously, puberty isn’t exactly the easiest of times, thanks to all those physical developments and outta control hormones. But thankfully, it’s a stage that we ultimately eventually grow out of and leave in the past. Unless you happen to be a celebrity, that is.

For your viewing pleasure, Colbert and Kroll are digging up the most painfully awkward snaps of the rich and famous — all in the name of charity, of course. Both the host and The House star kicked things off by giving Colbert’s audience a look at their own 13-year-old selves, with the comedian’s having come straight from gym class (i.e. sweaty) with a tie and jacket borrowed from the photographer because he “forgot” it was student photo day.

@stephenathome is raising money for Puerto Rico, donating money for every #PuberMe photo shared by celebs. Encourage your faves to get involved! #tbt

Kroll, TBH, just looks like a tinier version of the man he is now, sporting some stylish duds worthy of the ’80s or ’90s, no doubt.

#tbt Last Night on @colbertlateshow Stephen Colbert and I agreed to pledge money to #puertoricorelief for every celeb who posts a pic from their most awkward years w/ hashtag #puberme. Here is one of mine. I hadn't hit puberty yet which is why I guess I was dressed as a tiny mobster in a failed attempt to look tough?

From there, the #PuberMe campaign (yes, really!) was born, encouraging other stars to share photos from their own pubescent years. For every celeb that takes part, Colbert has pledged to donate money from his Americone Dream Fund to Puerto Rico relief.

As you might expect, celebs have responded enthusiastically, flooding social media with their pics. Check out some of their best snaps below!

1. Alison Brie: Brie may play the part of a total babe on Glow, but back in her teenage years, she was donning headgear and oversized PJs, just like the rest of us.

2. America Ferrera: Apparently, Ferrara has always been adorably perky. Look at that smile!

Dear @nickkroll and @stephenathome, Here I am in the sixth grade. Feast your eyes: there is so VERY much to take in. As you can see, I am at least 300% larger than all other sixth graders on the planet ever (the humans near me are to scale). After this impromptu juice box-fueled lunchtime dance I went out into the city and crushed puny humans with my thundering hooves of doom. Look upon me and despair. #puberme #puertoricorelief

4. Aisha Tyler: Tyler clear knew how to have a good time, even through her awkward puberty stage.

@nickkroll wants us to post embarrassing puberty pics. Here is me and my brother in my room #puberme #puertoricorelief thanks for donating @stephenathome

5. Amy Schumer: The comedian shared a snap hanging out with her big bro in her younger days. Note the many Beverly Hills, 90210 pics on the wall: too cute!

5. Emmy Rossum: Rossum, whose teenage shot looks like something out of a winter wonderland-themed magazine photo shoot, apparently skipped that whole awkward bit.

6. Jimmy Fallon: The talk show host rocked the Ocean Pacific look back in the day, the perfect match to the the light-toned denim he also chose to sport.

7. Topher Grace: That ’70s Show star Topher Grace proved he was adorably gawky in any decade.

8. Jimmy Kimmel: Kimmel has clearly always up for a little late night fun (bonus points for that on-point license plate).

Very unclear why I thought this was a good look. But @nickkroll @stephenathome I hope you raised a lot of money today! #puertoricorelief #puberme #bigmouth

9. Busy Philipps: These days, Philipps has a head full of sleek and straight locks, but back in the day, she was all about that crimped hair (not to mention witchy, Stevie Nicks-esque fashion). “Very unclear why I thought it was a good look,” she lamented. We beg to differ, Busy!

10. Sarah Silverman: The Wreck It Ralph 2 star was seemingly more into sports than comedy back in the day, showing off her inner tomboy in this super sporty getup.

What I lacked in eyebrows, I made up for in chin-ne. @nickkroll @stephenathome #puberme #puertoricorelief

If it’ll help #PuertoRicoRelief I’ll happily #PuberMe, but all my adolescent pics are 100% awesome: pic.twitter.com/VngrzRrlzu

12. Patton Oswalt: From the looks of this pic, Oswalt may have had another career path ahead of him as a musician. We wonder if he still has the sax?

#tbt circa 1983. Jacquie Maloney (aka Laverne and me from Cats) at the Berlin community school Halloween dance. Yes I’m holding my tail. Deal with it! 👻🎃💋😺 #puberme

13. Kelly Ripa: The Live With Kelly and Ryan host was always into showbiz, as she proved with this snap of her and Jacquie Maloney (“AKA Laverne from Cats“) at a Halloween dance. “Yes, I’m holding my tail.” she quipped. “Deal with it!”

#puberme #puertoricorelief I chose those glasses.

14. Gillian Jacobs: Love star Jacobs had her own sense of style, saying, “I chose those glasses.”

15. Chelsea Peretti: Still, she had nothing on Brooklyn Nine-Nine‘s Chelsea Peretti, who had her super chill pose down in this hilarious oversized button-down getup.

16. James Corden: The funnyman sort of looks exactly the same as he does now, only slightly younger.

I've been waiting all my life for this call.https://t.co/pxx7qvHPdf#Puberme #PuertoRicoRelief pic.twitter.com/nBJSzjrDfO

17. Lin-Manuel Miranda: Hamilton‘s shining star was repping Puerto Rico back in the day, and is sharing the snap to support the country now once more, bringing things full circle.

18. Conan O’Brien: O’Brien always had that signature red hair, making no mistaking of who this kid would grow up to be!

19. Ryan Seacrest: Seacrest, on the other hand, looks completely different than he did during his days of youth. What a transformation!

You can thank @ashleesimpsonross for my sweet bangs 💇🏼😬 #TBT #puberme #PuertoRicoRelief

20. Jessica Simpson: Who would’ve guessed that she’d be dropping jaws in her daisy dukes years after this snap of J. Simps (who’s rocking a sweet set of bangs thanks to little sis Ashlee) was taken?

Which is your favorite #PuberMe pic? Care to share your own awkward pic? Let us know @BritandCo!

Desiree O
Desirée O is a ‘Professional Bohemian’ who loves anything and everything related to the arts, entertainment, and pop culture. She ADORES being a ‘Newsy’ for Brit + Co, covering all of the latest tidbits of awesomeness that you want to read about. When she’s not writing, she’s either making messy art, going on long adventurous walks with her camera, or poking around over at bohemianizm (http://www.bohemianizm.com/). You can find out about Desirée O and her work at http://DesireeO.com/ or follow her on Twitter @DesireeO.
Celebrities
Celebrity News
Celebrities Charity social media