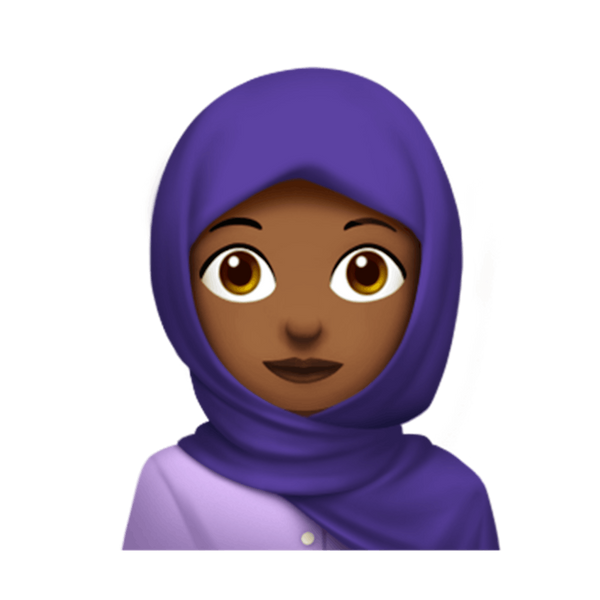 16-year-old Rayouf Alhumedhi was creating a group chat with her friends on Whatsapp when she was struck by the fact that there was no emoji that looked like her.

“The fact that there wasn’t an emoji to represent me and the millions of other hijabi women across the world was baffling to me,” she told CNN. “I just wanted an emoji of me.”

A long while back in Berlin 📸: @dominikbutzmann

She decided right then and there that this had to change. The Saudi-born teen, who now lives in Berlin, wrote up a quick proposal and sent it off to The Unicode Consortium, the non-profit corporation that approves and designs new emojis.

Unicode immediately paid attention. They paired Alhumedhi with a designer and the result was the new hijab emoji announced yesterday as part of World Emoji Day (yes, that really is a thing). Apple will release it, along with a bunch of other new emoji characters, later this year on all their devices.

Alhumedhi is super happy with the result — which she saw for the first time yesterday, along with the rest of the world.

There’s been a ton of support online for the new hijab emoji, along with plenty of backlash.

Reddit co-founder Alexis Ohanian hosted an AMA (Ask Me Anything) on the website with Alhumedhi. Many commenters posted that were resistant to the idea, with some arguing that “wearing the hijab is not a free choice” but rather “socially coerced.” Yet others called the headscarves “part of patriarchal constructs that oppress women.”

But not every commenter sided with the naysayers. “I think you’re looking at this issue from the perspective of a white westerner,” one person shot back. “So, since you seem to be a feminist, wouldn’t you agree that part of feminism is being able to wear whatever you want, whenever you want, without fear of judgment?”

At #emojicon from Berlin! 15-year-old Saudia Arabian @rayoufalh speaking about her quest for a hijab emoji. pic.twitter.com/5I1DzX9CRU

Alhumedhi’s aware that not everyone’s on board with her new emoji. She still hopes that once the hijab character appears in our devices, “that will establish that notion that we are normal people carrying out daily routines just like you,” she told CNN.

Unicode’s been pumping out plenty of new official emoji lately— as of June, there are 2,666 emoji total. It’s also been trying to include a greater variety of flags, skin colors, and jobs.

Sure they’re just little drawings. But in our emoji-obsessed world, a hijab character definitely signals better representation for Muslim ladies all over the globe.

What do you think of the new hijab emoji? Tell us @BritandCo.

Bronwyn Kienapple
Bronwyn Kienapple is a Toronto writer who recently spent four years living in Mexico City and traveling in Southeast Asia. She's a former publishing professional who quit her full-time job to travel and write. When she's not penning cozy cat mysteries for Amazon or ghostwriting romance and YA, she's hoarding foster cats, eating all the vegan food, and planning trips near and far.
Emoji
Diversity
Emoji Ladies First
More From Diversity