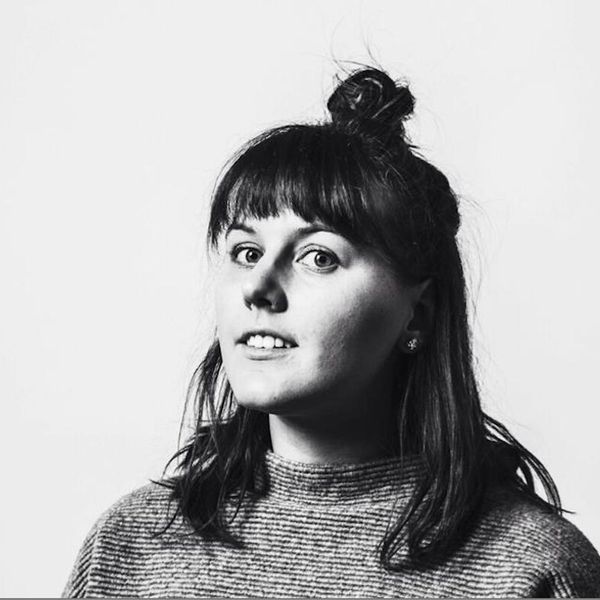 Toronto-based podcast producer Katie Jensen has built a booming business for herself over the past few years. In a move many people would only ever dream of, she left her comfy corporate job to pursue her creative passions, and now counts herself as one of Canada’s most prolific — and successful — in the growing field, releasing some of the most popular titles on the country’s iTunes charts.

Since branching out to run her own production business, Jensen has produced shows for clients including tech startups, Vice’s Motherboard, charitable foundations, and major publishers, and currently works on the podcast associated with Canada’s most prestigious music prize, the Polaris Music Prize podcast, Safe Space, and the hit showThe Secret Life of Canada, among others.

“Working with strong, independent, creative women is all I ever want to do,” says Jensen.

We reached out to Jensen via email to learn more about making career moves, being a legitimate disrupter in the media landscape, and some practical tips for turning your ideas into action while lifting others up along the way.

B+C: Could you give some insight into your two-year path from first starting as a podcasting intern to being one of the most prolific — and self-employed — podcast producers working right now?

KJ:I was working in downtown Toronto as a corporate account manager for a Fortune 500 company, spending my lunch hours combing through newspapers and devouring news podcasts on the commuter train home. After spending three years inside this corporate environment, I was itching to pursue creative work, having never given myself permission to do so before. I enrolled in a postgraduate radio broadcasting program, which was a bit of a joke; one of my instructors didn’t know what podcasting was, and the program coordinator didn’t like me very much — I was the Hermione Granger of podcasting. At the end of the year, I was not given a recommendation for an internship at CBC, my then-dream company. [But] I was still very interested in news and current events, so I decided to cold email Jesse Brown of [the popular Canadian media site] Canadaland.

I essentially did what everyone tells you to do — find the job you want, and then create it for yourself. After being at Canadaland for a year, I developed a new arts and culture show called The Imposter. After successfully releasing seven episodes, I left the company to focus on managing my chronic health conditions, which had flared up after two years of intense deadlines in a high-stress environment. I had been speaking with some girlfriends about freelancing, and I liked the idea of being able to control my workload and have more agency over editorial content. In January 2017, I began freelancing full time and haven’t stopped.

B+C: A lot of people talk the inclusivity talk, but you’ve made it a mandate of your work in very tangible ways. Why was that important to you?

KJ: Inclusivity is the most disruptive thing you can do to media. I’m so bored of white stories on white paper. The best podcasts are hosted by women of color — in the US, I love Another Round, Call Your Girlfriend, The Nod, and Stuff Mom Never Told You. In Canada, I love Colour Code and Out in the Open. I also love every podcast I make — I’m lucky to work on the projects I want to.

I want to wedge my foot in the door and hustle in as many women as I can. For me, the future of media is a diverse, representative landscape where bylines, headlines, and ledes aren’t facepalm-worthy. I really enjoy shaking the legacy media pedestal and seeing who slips off so that other people might get a chance to shimmy up.

B+C: Do you have any actionable advice for others who want to do the same?

KJ: To those with power: hire more people of color. Hire black editors. Hire indigenous editors. To women who look like me: share your knowledge, pass on your skillset, recommend women for jobs. I’m a firm believer in Shine Theory; as a producer, that rings especially true.

B+C: You’re also a big advocate for income transparency in your industry. What benefits have you seen either for yourself or for others in doing this?

KJ: Data is important to me — the more we have, the more informed our policies and individual decision-making will be. It’s been refreshing to share my pathetic salary so that I can find others to commiserate with.

B+C: Why do you think so many people are still so afraid of that transparency?

KJ: The only people who ought to be afraid of income transparency are the people who aren’t paying employees enough. I suspect people are afraid of sharing their salaries due to the threat of employer retribution or perhaps fear of subtle social reinforcement by their peers.

B+C: Your motivation and just-do-it mindset are pretty enviable. Could share one or two tips for those who have ideas but don’t know how to get them started?

KJ: Mental hurdles are absolutely normal and part of the creative process. You just need to figure out what conditions work best for you. For me, I do my best production at night, and I whine and turtle-crawl pathetically through the afternoon. I could try to force myself to work on a 9-5 schedule, but I wouldn’t be making my best work, so I work when I feel the most inspired, which, unfortunately, happens to be 10pm-2am.

I use certain playlists on repeat to keep me writing — Steve Reich’s ECM Recordings or The Avalanches’ Since I Met You got me through a lot of writing deadlines last year.

Two indispensable items in my creative arsenal are my Leuchtturm1917 project notebook and my Moleskine daily planner. My project notebook has client timelines, storyboarding, script notes — everything essential to my freelance work. I’m a paper person, so writing things down is essential. In my Moleskine planner, I write down every little dumb thing on my to-do list — from emailing clients to sending invoices to doing the dishes. Before I go to bed, I push everything that didn’t get done to the next day, which helps clear my mind before I attempt to sleep.

A huge support system is the women in my life. I’m in a Gchat with four women — all of them journalists — and they help me every single day. We share our success stories, our vexations, and our endless gossip about the media industry. I am driven to impress these women — each of them is incredibly successful in their own verticals — and I am convinced they let me in by accident. I can be vulnerable with them too. It’s really important to surround yourself with women who inspire you to be your very best, but who also provide a soft place for you to land, because in this industry, you fall a lot, and sometimes, it’s because you’re pushed.

I’ve been freelancing for a year, but it feels like forever, because I love it. I’m doing what I want on my own terms. Podcasting allows me to empower people to tell their own stories, and I’m going to ride this wave for as long as it’s interesting, challenging, and brings me joy. Or until I have to pivot to video.

Have you ever wanted to or have you started your own business? Let us know @BritandCo!