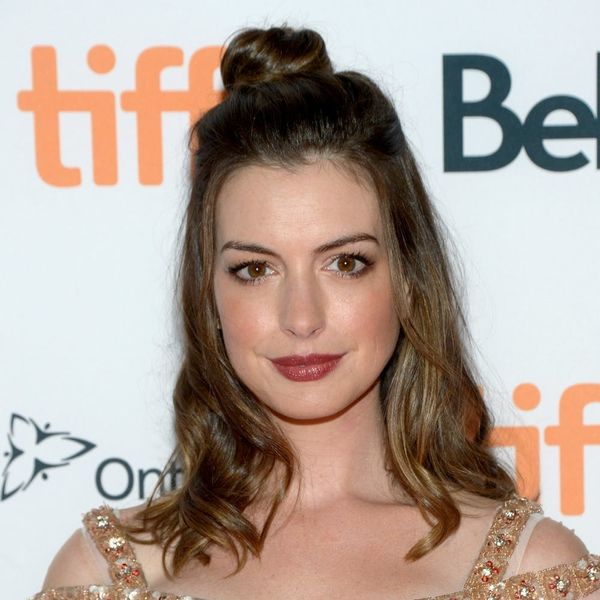 ICYMI, in 2013 (the same year she incidentally won an Oscar), Anne Hathaway (who is keeping it real about her post-baby bod) was kind of the girl we loved to hate. For no reason. At all.

With articles hailing her as “Hollywood’s most hated celeb” and trolls branding themselves as “Hathahaters,” it was a rough time for little Princess Mia (potentially coming back for Princess Diaries 3 — eee!). She was criticized for the way she talked, what she wore, whom she dated, you name it. And frankly? It took a bit of a toll (because, you know, she’s actually a real person. With feelings.) In fact, Anne has said she was devastated to find out that America despised her.

While you might think receiving the Oscar would be the best revenge, Anne is now telling The Guardian that she actually wasn’t happy in the moment — at all.

Despite a halfhearted “It came trueeeee” at the beginning of her not-so-convincing acceptance speech, Anne says that instead of having a pinch-me moment, she was feeling… well, uncomfortable. “I felt very uncomfortable. I kind of lost my mind during [Les Miserables] and it hadn’t come back yet. Then I had to stand up in front of people and feel something I [didn’t] feel, which was uncomplicated happiness. It’s an obvious thing — you win an Oscar, you’re supposed to be happy,” she says.

Instead? “I felt wrong to be standing there in a gown that cost more than some people are going to see in their lifetime, and winning an award for portraying pain that still felt very much a part of our collective experience as human beings.”

Whoa. That’s some deep food for thought, no?

Apparently, she wasn’t fooling anyone, as Hathahaters used her less-than-enthusiastic demeanor as more opportunity to attack her. “I tried to pretend that I was happy, and I got called out on it,” she says. “Big time. That’s the truth, and that’s what happened. It sucks. But what you learn from it is that you only feel like you could die from embarrassment. You don’t actually die.”

Lucky thing, since Anne’s now a mother and set to star in the upcoming Ocean’s 11 remake — and we, for one, will be rooting for her, wholeheartedly.

Nicole Briese
Nicole is the weekend editor for Brit + Co who loves bringing you all the latest buzz. When she's not busy typing away into the wee hours, you can usually find her canoodling with her fur babies, rooting around in a bookstore, or rocking out at a concert of some sort (Guns N' Roses forever!). Check out all her latest musings and past work at nicolebjean.com.
Oscars
Entertainment
Oscars
More From Entertainment