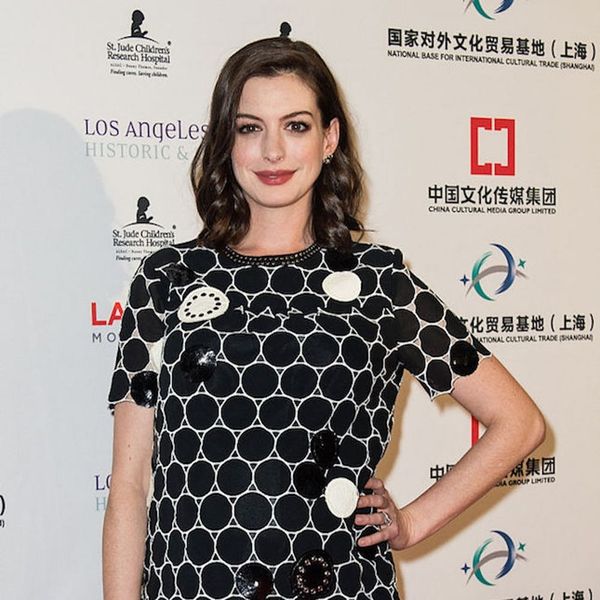 Earlier this summer, Jennifer Aniston responded to the never-ending tabloid speculation about whether or not she was pregnant with a powerful essay, and her words about the “the objectification and scrutiny we put women through” resonated with many. While Jennifer’s essay addressed much more than the way we talk about pregnancy, the truth is that pregnant women and new mothers face their own huge societal pressures — what happens to their bodies not least of them. But some women have followed in Jennifer’s steps and are speaking out against the unfair expectations. Check out these examples of women who have gotten candid below:

1. Anne Hathaway: In a recent Instagram post that went viral, the new mom put it simply: “There is no shame in gaining weight during pregnancy (or ever). There is no shame if it takes longer than you think it will to lose the weight (if you want to lose it at all),” she wrote. “There is no shame in finally breaking down and making your own jean shorts because last summer’s are just too dang short for this summer’s thighs. Bodies change. Bodies grow. Bodies shrink. It’s all love (don’t let anyone tell you otherwise).” (Photo via Pascal Le Segretain/Getty)

2. Blake Lively: While Blake recently admitted that she went on a a strict diet for her shark thriller The Shallows just eight months after giving birth, she also recently expressed her frustration with post-baby goals. “I think a woman’s body after having a baby is pretty amazing,” she said on Australian morning show Sunrise. “You don’t need to be Victoria’s Secret-ready right away because you just did the most incredible miracle that life has to offer. I mean, you gave birth to a human being! So I would really like to see that celebrated.” (Photo via Ian Gavan/Getty)

3. Chrissy Teigen: We can admit that we’ve been in awe of how quickly Chrissy seemed to snap back to the figure she had before giving birth to little Luna. But we’ve also openly high-fived her normalizing the changes a woman’s body goes through post-baby, like weird rashes, the agony of peeing and, of course, stretch marks. Way to keep it real, Chrissy. (Photo via Frazer Harrison/Getty)

4. Olivia Wilde: Let this be your new mantra: “I believe in a world where mothers are not expected to shed any physical evidence of their child-bearing experience,” Olivia told Shape. “In that same world I believe there is space for exercise to be as much a gift to your brain as it is your body. I don’t want to waste my time striving for some subjective definition of perfection. I’d rather rebuild my strength while dancing my ass off… literally.” (Photo via Nicholas Hunt/Getty)

5. Zooey Deschanel: Zooey had her first child a year ago and didn’t seem to sweat any post-baby body stuff. In fact, as she says, it’s kinda out of her hands, to an extent. “To expect someone to look like her pre-baby self immediately is odd. Because you just grew a human and then birthed that human — there’s a lot that needs to go back to where it was. All your organs move around, for chrissakes!” Ew. And true! (Photo via Mark Davis/Getty)

6. Kerry Washington: Kerry has been through the “baby body” ringer before, and as she’s about to welcome her second kid, we hope her own wise words come back to comfort her. “A few weeks ago, my manager asked: ‘Do you feel like you’re back? I feel like you’re back.’ She meant it as a total compliment, but we had this great conversation where I was like, ‘You know what? I try really hard not to use that language, because it’s not about going backward in life.'” (Photo via Alberto E. Rodriguez/Getty)

Are you a mom who has gone through “post-baby body” experiences? Let us know over at @BritandCo.