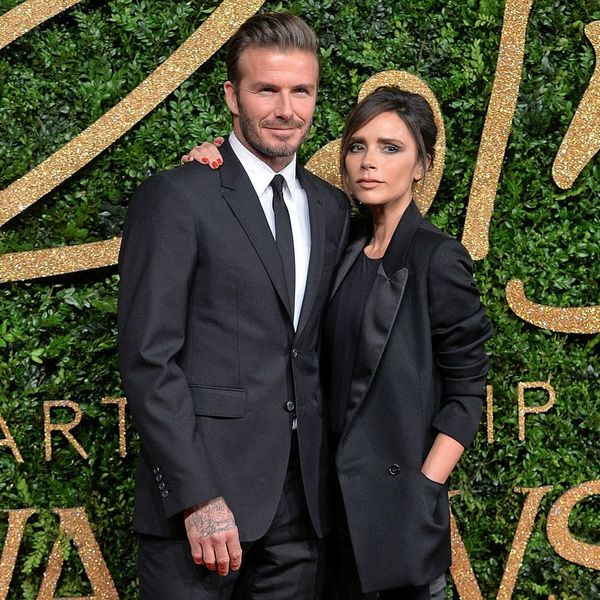 Victoria and David Beckham are practically synonymous with one another at this point: The duo recently celebrated their 17th wedding anniversary together, and it’s hard to think of a time when they weren’t at one another’s sides, TBH.

Yet, such a time did exist, and Victoria, for one, can remember the moment that it all changed as clearly as day — well, sort of — a fact she proved in her cover interview with British Vogue.

Introducing #OctoberVogue, starring @victoriabeckham photographed by @lachlanbailey and on newsstands from September 8. The issue includes a letter that the designer has written to herself, entitled "What I Wish I'd Known". Read more via the link in bio

Reflecting back on the day she met her fated husband-to-be, she writes as follows: “Learn more about football, especially the offside rule. And yes, love at first sight does exist. It will happen to you in the Manchester United Players’ lounge — although you will get a little drunk, so exact details are hazy. While the other football players stand at the bar drinking with their mates, you will see David standing aside with his family. (He’s not even in the first team at this stage — you are the famous one.) And he has such a cute smile. You, too, are close to your family, and you think how similar he feels to you. He will ask for your number. (He still has the London-to-Manchester plane ticket on which you wrote it.)”

Wow 17 years ago to this day this happened... I was lucky to meet someone who has the same drive and wanted the same things in life... We have created 4 beautiful children and I couldn't wish for a more loving and caring mummy for them... Happy anniversary, I love you ❤️❤️❤️❤️❤️

David, for his part, had his heart set on Victoria even before their fateful meeting, as he reportedly told The Sun. After seeing her in “Say You’ll Be There,” he told the outlet that she was the girl for him. “She’s my idea of perfection,” he said then. “I knew if she wanted me, we’d be together forever.”

Awww, how cute are these two? Cheers to love at first sight.

Do you believe in love at first sight? Share with us over @BritandCo!

Nicole Briese
Nicole is the weekend editor for Brit + Co who loves bringing you all the latest buzz. When she's not busy typing away into the wee hours, you can usually find her canoodling with her fur babies, rooting around in a bookstore, or rocking out at a concert of some sort (Guns N' Roses forever!). Check out all her latest musings and past work at nicolebjean.com.
Celebrity Couples
Entertainment
Celebrity Couples love marriage
More From Entertainment