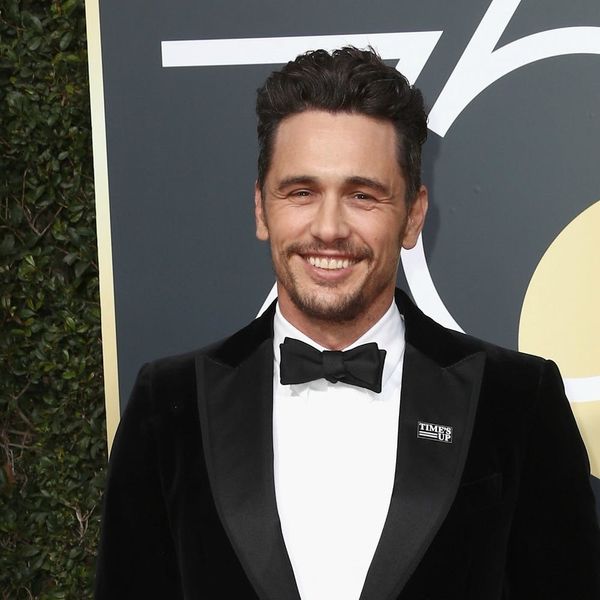 James Franco’s attempt at an apology on Tuesday night’s Late Night with Stephen Colbert fell flat for many fans. Franco was speaking to a 2014 accusation that he’d been involved in at least one questionable sexual exchange with an underage woman. But now, besides the 2014 story that is gaining new light, five former students who worked with the actor-director are coming forward with their own stories of alleged abuse.

Speaking with The LA Times, the women are sharing various stories about their former acting teacher whose alleged behavior they say was inappropriate or sexually exploitative. “I feel there was an abuse of power, and there was a culture of exploiting non-celebrity women, and a culture of women being replaceable,” Sarah Tither-Kaplan, one former student, told The Times.

Hey James Franco, nice #timesup pin at the #GoldenGlobes , remember a few weeks ago when you told me the full nudity you had me do in two of your movies for $100/day wasn't exploitative because I signed a contract to do it? Times up on that!

Franco was a drama teacher at Hollywood’s Playhouse West before opening his own school, Studio 4 (the school closed in the fall) whose mandate, he said at the time, was to give up-and-coming actors a foot in the door by giving them small roles onscreen in Franco’s films.

During a scene in one of the Disaster Artist director’s earlier films, where several of Franco’s Studio 4 students were engaged in a staged, sexual encounter with their teacher, Tither-Kaplan accuses Franco of removing the protective plastic guards the actresses were wearing to cover their genitals. He then went on, Tither-Kaplan says, to simulate sex with the women without the shields. She also accuses her former acting coach of exploiting the women by only paying them $100/per day to act in the explicit scenes.

Former students of the actor from his days at Playhouse West (pre Studio 4) say he was also inappropriate while employed at their school, too. Hilary Dusome and Natalie Chmiel told the paper that when Franco approached them to film some scenes, he told the aspiring actors that the footage would be used in a 7 For All Mankind commercial. The two women say what happened next was a “hostile and unprofessional” video shoot at an LA strip club.

When none of the women on set volunteered to get topless for Franco, Dusome and Chmiel say that Franco got visibly angry. “He just took advantage of our eagerness to work and be a part of something bigger,” Chmiel said. “We were all these up-and-coming actors who were so hopeful.”

Tither-Kaplan also told the Times that anyone who balked or said no to the actor’s demands was quickly removed from participating in Franco’s productions. “I got it in my head pretty quickly that, OK, you don’t say ‘no’ to this guy,” she said. But, Tither-Kaplan also said that when the Harvey Weinstein story first broke last year, that Franco did formally apologize to her for making her feel uncomfortable.

“I want to give him credit for at least being open to communicating with me,” she said. “I felt that he was still not really taking accountability for the environment on the sets.”

In light of these new accusations, five women have called Franco’s previous behavior against them out, while a sixth, actress Ally Sheedy subtweeted about the star when he took home his Golden Globe on Sunday night. Since the LA Times story broke, the Facebook account for The Room, the movie that Franco’s Disaster Artist draws from, has publicly spoken out against Franco and the allegations.

“Sadly, there is nothing to joke about here,” the post reads. “This is supremely disappointing, to say the least. Oscar nominations will be announced on January 23rd, but it doesn’t seem likely that Franco is among the nominees, with good reason. A sad day, indeed.”

While Franco has yet to publicly address these new allegations himself, Franco’s lawyer has told the LA Times the accounts are “not accurate.”

What do you think about the latest allegations against James Franco? Tell us @BritandCo!