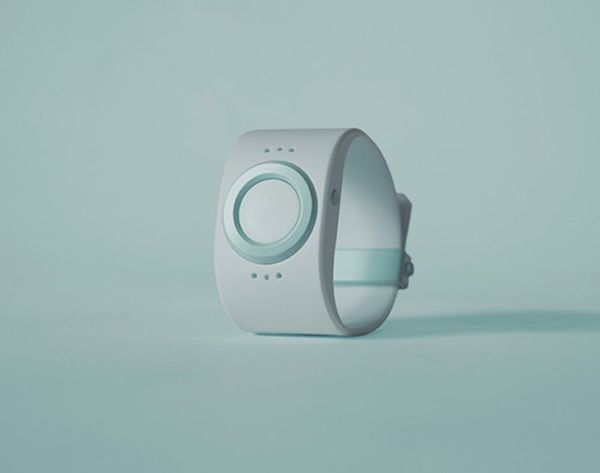 We can feel it coming. It may not be here just yet, but soon enough, we’re all going to be buried in a tidal wave of kids wearables. It’s starting in the toy aisle with Tamagotchi-meets-tracker Launchpad from LeapFrog, and Moff, which turns anything in your hand into a toy. Then there’s the bright and playful FiLip wrist tracker, announced at CES earlier this year. Soon to join the kiddie market is one that might be our favorite tot wearable to date: Tinitell.

With the touch of the button, your wee one can call a phone or another Tinitell. Just push the button, and say the name of the person you want to call. Tinitell will pull the name from the pre-programmed contact list, which you’ll set up on the app. If voice matching isn’t your jam, you can also use the volume keys to scroll through your contacts. When Tinitell says the name you’re looking for, just hit the center button, and the call will be placed. Call coming in? Hit the big button for that too.

The battery power on this sucker is good for an hour worth of talk time and can be used in every country in the world, save North Korea, South Korea and Japan. And seeing as it’s your little rambunctious rascal who’s going to be wearing this device, you better believe it’s ready to get wet, muddy and slammed around. Durability is definitely included. In fact, the device was developed to give kids freedom to go outdoor and play rather than sitting inside and staring at an iPad.

The GPS comes in handy when your wild one runs a little too far off. From the app on your smartphone, you can geolocate and contact them. Say for instance, your little menace goes over to prank Mr. Wilson AGAIN. Just place a quick phone call to their wristwatch and let them know that dinner is ready and it’s time to come home.

The phone appeals to more than parents. It can be useful for lone adventurers, who might want to let family and friends keep tabs on them while they’re off in Bear Country, Montana for the summer. It also has major benefits for anyone who is caring for elderly or disabled loved ones.

Now, let’s talk about the aesthetics. Tinitell’s good looks came from… where else? Scandinavia. Entrepreneur Mats Horn and his design team wanted to create something that they would have wanted to wear when they were kids and something that was intuitive and easy to use. They achieved those charming good looks and that simple interface by leaving the components out, designing the body first, then making minor adjustments to fit the guts inside. Let’s just say there’s a reason it won Sweden’s largest entrepreneurship competition last year.

We can’t wait to see this adorable and minimalist tech go to market. The price is projected to be $179. If you’re ready to become an early adaptor, head over to their Kickstarter and pledge $99 for a real deal on one wickedly awesome wearable that will start shipping a year from now.

Lastly, we leave you with their awesome promo vid that is slightly Wes Anderson-esque and totally adorable. Check it out.

Would you outfit your kiddo with a Tinitell? Let us know in the comments below!

Thanks to Method for helping us launch Brit Kids!

Lex Monson
Alexis is the co-founder of Punkpost, the app that lets you send handwritten cards (yes, handwritten by a real human) in the amount of time it takes you to send a text message. The exclusive card collections are created by a community of artists and designers and hand letter pressed on high-quality cotton paper. Get the full experience by downloading the app from the iTunes Store.
Kickstarter
Tech
Kickstarter