The First Kids Wearable Is Like an Activity-Tracking Tamagotchi 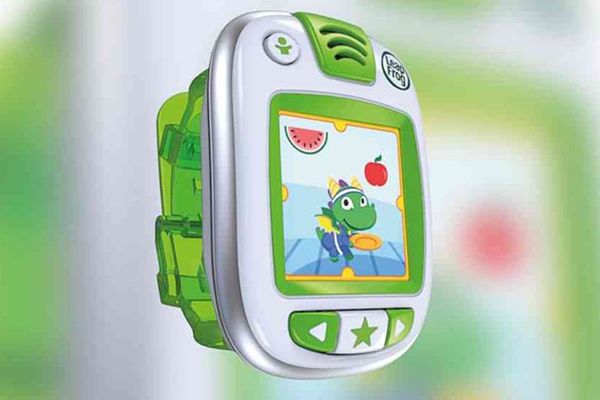 The stroller set is adept at iPhonery, tots have tablets before they’re talking and now wearables come in kid-size. LeapFrog announced LaunchPad, the first activity tracker for kids that will be available for their little wrists by August. Just like mommy’s!

Yes and no — this isn’t exactly mama’s wearable. Designed for kids ages four to seven, this $39 system reminds us much less of Jawbone and way more like the Tamagotchi we had when we were wee (which, btw, is making a comeback). But this little device is actually encouraging healthy habits and an active playtime outside of its small screen. Kids pick a pet to play along with and take care of, and together they do fun activities: “Wiggle like a worm!” “Pop like popcorn!” They get wigglin’ and poppin’ with their pets, feed them healthy snacks and learn about nutrition with fun facts. It’s even water resistant so sweating or splashing is further encouraged.

Moms and dads can program up to 50 different activity prompts and set “quiet time” modes for sleep and school. Kids can track their progress on an energy bar on the screen and parents can see how things are going through an app or website. Unlike activity trackers for adults, it’s a no-no to collect data on children under 13 so that info is all your family’s, not LeapFrog’s.

Yes it’s a wearable and the way we’ve been trained to think about them made us a little skeptical in the hands of kiddies, but LeapFrog’s LaunchPad feels like more of an activity motivator than a “tracker.” In the same way that Wii, Kinect and other consoles and video games have turned a sedentary pastime into a heart rate amping activity, this idea could do the same with no screens involved. As long as “calories burned” and “weight goals” are left out of the conversation, we think this is a huge step (un-counted, of course) in a healthy direction as our nation faces staggering stats surrounding childhood obesity.

What do you think of kids wearing wearables? Do you think it’s a good/healthy step in the right direction or is it too grown up?

Lisa Raphael
In her past professional lives, Lisa has served the masses as the Editorial Director at Brit + Co, Bieber Whisperer at J-14, Golden Girls Fan Club Prez at Lifetime and Talk Show Host Understudy to Katie Couric. Now, she's taking on the sports world at The Relish, teaching Hairography 101 in her spare time and will forever be trying to fill the hole Zayn Malik left in her heart.
Health
More From Health