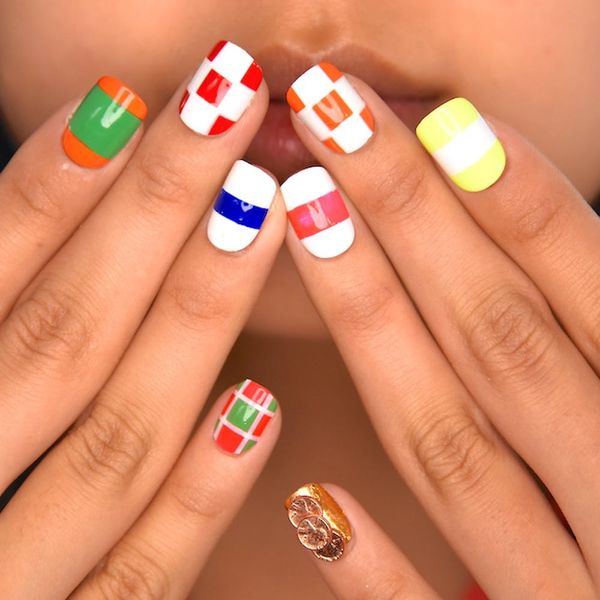 Nail art is probably one of the coolest ways to get really creative — there’s so much you can do during Halloween and beyond. And no one can deny the confidence boost you get from sporting a killer mani. However, before you head to the salon, take a moment to read this. According to a study by Duke University and the Environmental Working Group, a chemical that is commonly found in polish called triphenyl phosphate, or TPHP, has been proven to potentially interfere with your endocrine system.

Your endocrine system is responsible for creating hormones that regulate your metabolism, sexual development as well as growth. It also produces the chemical substances in the body that regulate things like your organs and cellular activity. Basically, it’s extremely important. What the scientists found was that women were processing higher amounts of TPHP than men were, which is why they deduced that women were likely absorbing the chemical from their beauty products — like nail polish. Out of a study of about 3000 polishes, TPHP was found in 49 percent of them. Yikes.

TPHP is added into polish to create flexibility. Yes, it helps your polish adhere to your nail and stay, which is great. However, the side effects like weight gain might not be worth it. Normally, molecules don’t typically enter the body through your nails. The study states that “the researchers theorized that other polish ingredients such as solvents rendered nails more absorbent.” Also, they wrote, “TPHP interacts with a protein central to regulating the body’s metabolism and production of fat cells. Scientists are conducting more investigations to discover whether, in fact, TPHP contributes to weight gain and obesity.” While there’s no final word on that yet, it’s still something to bear in mind the next time you book a trip to the salon.

Some other things to note are TPHP exists in greater amounts in clear polish vs. colored polish — so take that into consideration when you’re choosing your next nail color. Currently, the EWG has already set up a petition urging companies to remove the ingredient from their products.

Will you be signing the petition? Tell us in the comments below!

Kimberly Wang
Kimberly Wang writes about all things pop culture, tech, style, and beauty. She's a Bay Area transplant and has an MFA in Creative Writing from Columbia University. On a sunny New York day, you can find her hanging out with her mini schnauzer Isabelle Jellybean on a blanket in Central Park.
Manicure
Health
Manicure Nail Polish