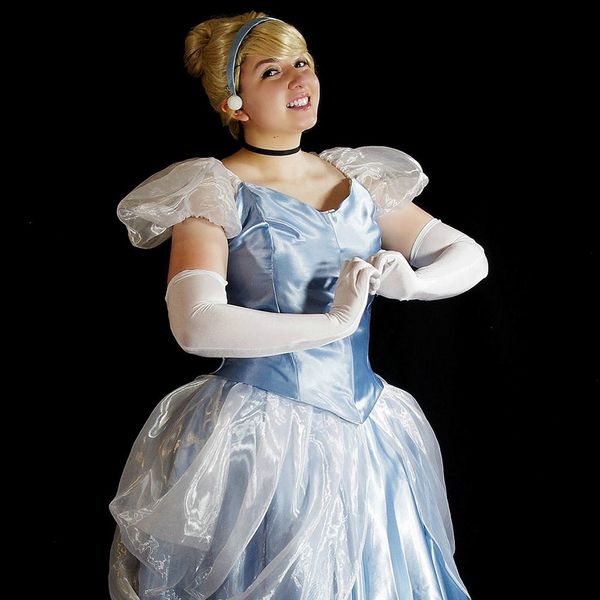 We’re going to toot our own horn for a sec here, but we like to think we’re pretty great at coming up with cool Halloween costume ideas here at Brit + Co. I mean, whether you want to dress up as a bunch of brunch foods or your favorite Real Housewife, we’ve got you covered. And though we definitely DIY a lot of what we make, we just got SCHOOLED by this Cosplayer whose transforming Cinderella costume is literally the stuff of Fairy Godmother magic.

Cosplayer Belinda Christie recently posted this video of her custom made costume she sported at Salt Lake Comic Con, which *spoiler alert* won the Judges Choice award at that event. At first glance, the outfit looks like the drab, housekeeping clothes Cinderella wears at the beginning of the movie. But then, as Belinda begins to twirl around, she starts to loosen ties here and there and then, voila! The brown and white dress is swallowed up by the baby blue ball gown we all know and love. I mean, even her hat disappears to reveal a perfect ballerina bun. We’ve watched that video on loop like 20 times, but as avid DIYers we had to know how something like this was made. So we got in touch with Belinda to learn a little bit more about her process.

Belinda says that she was originally inspired to make the dress after seeing a group at the European Cosplay Gathering that had created something similar for a Frozen themed performance. She tells us, “I knew right then that I wanted to do something similar but I couldn’t think of what. A friend said that if I wanted some ideas then I should turn to broadway and watch some of the quick changes they’ve created. That’s when I found Rodger and Hammerstein’s Cinderella and the second I saw their Tony Awards performance I knew I wanted to create her dress.”

Belinda says, “I spent a lot of time watching videos of that Cinderella dress and looking up interviews with the designer William Ivey Long to try and figure out how to pull something off myself. I even tried to contact someone who had made a replica of the dress but never got a response back.” After a lot of trial and error, Belinda created a design that best resembled the quick change she saw in that Tony Awards performance. “I didn’t actually start creating the dress until two or three weeks before FanX [the Cosplay competition she entered and won].” She goes on to say, “I created the majority of the pattern for the dress myself and altered other patterns to create the look I wanted. I finished the dress the morning of the convention and because of that I didn’t have time to actually test out the dress until getting in front of the judges, which thankfully it worked!” Belinda, we can’t confirm this, but we’re guessing you must have had a Fairy Godmother looking out for you.

Belinda says the biggest challenge in creating this work of art was the brown bodice of the dress. She explains, “It’s the part of the dress where I think the majority of the magic centers on. I noticed that the broadway version of the dress used the bodice to help hide the ball gown and that the way it releases the dress seemed quite intricate. It’s the piece I stressed out the most over but I was fully able to figure out that there were a few strings that had to be pulled at the sleeves along with a pin down the center of the bodice, which would then allow the bodice to fall part and the ball gown to spring free and hide the rags dress underneath.”

So there you have it. Ain’t no thang, right? Ha! Kidding. Belinda, you’re some kind of magical seamstress and we’ll be forever in awe.

What’s the coolest costume you’ve come across in 2015? Share it with us in the comments below.