6 Ways to Be a Real Housewife for Halloween 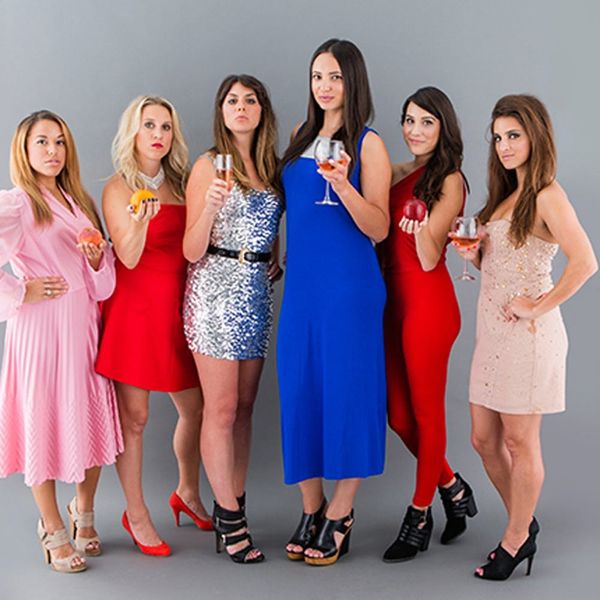 Whether you want to admit it or not, you’ve probably sat through *at least* one episode of the Real Housewives franchise and/or one of its spinoffs. Or if you’re like me (and a handful of B+C ladies and the nation at large) you’ve wholeheartedly given into the guilty pleasure that is the Bravo TV reality powerhouse, allotting half of your weekly TV viewing time to indulging in the shenanigans of the various Wives. And if you’re really like me, you want to huddle your friends together to construct the most epic group costume this Halloween — behold, the Real Housewives of B+C:

I’ve been with the franchise ever since the very beginning when the gated community of Coto de Caza showcased its Southern California women during the inaugural season of The Real Housewives of Orange County. I’ve been there for the now defunct DC and Miami editions and I’m eagerly awaiting the return of the Queen, Teresa Giudice (sorry not sorry). I’ve got shirts. I constantly send Housewives GIFs to everyone on my phone. And one of my favorite games is “What would your Housewives tagline be?” (Mine? “My bow tie gives class, but my mouth gives sass.”)

With the help of our amazing Beauty Editor + Stylist, Misty Spinney, who rounded up perfect outfits from thrift stores around San Francisco and got our Brit + Co Housewives primped + prepped as if they were attending their very own reunion (no worries, no real screaming, hair pulling or wine tossing occurred), I got to live out my dream of being Andy Cohen for a day. You better believe this was my favorite Halloween costume photo shoot we’ve ever done.

Grab a glass of rosé, a Grey Goose with lots + lots of lemons or even a bottle of Skinnygirl Margarita and check out how you can work it on Halloween night as a quotable, fearless Real Housewife below.

The most successful and catchphrase-producing Housewife made her return to the NYC-based edition this past season and while the Big Apple cast brings it in the style and quotable moments departments (“What are you doing here without Dorinda?“), the Skinnygirl creator was our inspo for this shoot. Mainly because the ladies at Brit + Co looooove themselves a jumpsuit.

Hop into one — preferably red apple-hued + off the shoulder — and pick up a shiny red apple to hold all evening long. Arm yourself with witty comebacks and hurl ’em all night long to make sure people get off your jock ;)

The reigning Queen of the Atlanta franchise (Bloop! Bye, Nene! #TeamTwirl) cemented her iconic status during her first season after various stunts, most noteworthy was her gone with the wine fabulous twirl.

To recreate that unforgettable spinning moment all night long, pick up a peach, then find a pink-peach loose, flowy gown (long sleeves required) to slip into to twirl your way from party to bar to after party while shouting various phrases like “Yaaasss,” “I’m gone with the wind fabulous,” “Life twirls on,” “You don’t have permission to talk to me,” and “Don’t come for me unless I send for you.”

“Boldness comes at a cost, and I’m willing to pay.”

Like her blonde OC counterparts, Vicki Gunvalson and Shannon Beador, this gal knows how to toss back the drinks in a cocktail dress while simultaneously screaming her lungs out when she doesn’t like something she hears (i.e. “That’s my opinion!”).

Go as the OC blonde by blow drying your hair sky high and adding plenty of bling accessories anywhere + everywhere on your body, with an orange as a bonus accessory. If you’re not into the red reunion look, try out an all-white attire, as the recently born again religious lady just got baptised during season 10’s finale.

Whatever you do, try not to (AKA definitely do) toss a glass of wine at a Jeana Keough lookalike ;)

“Haters are gonna hate, but I just love, love, love.”

Free Tre! Okay, yes what she did was totally and completely illegal and horrible and she deserved to do some time in prison for it but that doesn’t mean I haven’t been counting down the days until she is released (reportedly December 23, FYI) so she — and her daughter, Queen Milania — can return to my TV screen and endlessly entertain me.

For this table flipping Jersey girl, find a flashy, bright gown that’s accented with shimmery + shiny things, straighten your hair like a noodle (try and capture that distinct hairline, too) and get ready to shout, shout, shout. Grab some bonus accessories by dressing your little girl up as the previously mentioned Milania, carry around a stack of Teresa’s cookbooks and even a bottle (or several) of her adult beverages, Fabellini. Whatever you do, if someone brings you sprinkle cookies, throw them in the garbage.

If a gown isn’t the Jersey girl look you’re wanting to rock try an all fur ensemble (yes, with a furry hat) or just go with all things sparkle and glitz and don’t let anyone tell you to pay attention, or you may just be flipping another table before the sun rises.

“Life isn’t all diamonds and rosé, but it should be.”

The British Beverly Hills Housewife is without a doubt one of my all-time faves. She’s classy, a successful businesswoman and above all, she’s very sassy (Exhibit A + Exhibit B) — kind of a must when you’re in this group, though.

To successfully capture the effortless glam of this very rich Brit, pick up your fluffy pup (her Pomeranian, Giggy, is always by her side), throw on a diamond-studded gown or an extremely pink + pastel dress and adorn your neck and arms with as many diamonds as you possibly can. Fake, costume options are totally acceptable ;)

Last step, visit the closest thing in your town to Lisa’s own restaurants, SUR or PUMP, grace the plebeians with you and your Giggy lookalike’s presence and serve up witty comebacks while laughing and smirking all night long. Oh, and make sure to practice that British accent — you don’t want to embarrass yourself.

“I’ll give you my opinion, but you better be ready to hear it.”

This import from the Melbourne franchise may not be as well known as the ladies of NYC, Beverly Hills, OC, Atlanta or NJ, but since I am a self-professed diehard Housewives fan, I, of course, know her and love her. Just like a majority of all Housewives, minus RHONJ’s Melissa Gorga (yuck!).

The barrister doesn’t play games when it comes to her fellow Housewives and packs a mega punch with her mouth and appearance.

Opinionated, love tight, cleavage-baring (and flashy) outfits, a good, heavy spray tan and majorly teased hair? Then this is the Housewife look for you. Hey, if you can’t actually go Down Under, why not at least impersonate a memorable lady from the country ;)

As a Housewives superfan, it was really tough to narrow it down to these six Housewives — one from each of the current cities. I could have done more than 20 women, if I’m being honest. So if none of these ‘wives speak to you for a Halloween (or just a normal weekend) look, let the lemons talk and go as Beverly Hills’ Yolanda Foster or Orange County’s Shannon Beador, give yourself a title a la NYC’s Countess LuAnn or Carole Radziwill (a princess through marriage), pull a sister act as Beverly Hills’ Kyle and Kim Richards, get loud and proud like Atlanta’s Nene Leakes or go as one of the array of other current or retired Housewives from Bravo’s ever-expanding roster. Redheads, there’s options for you too: Former NYC Housewife Jill Zarin and former NJ Housewife Caroline Manzo. There’s truly a Housewife for every type of gal ;)

Whichever Housewife you choose to channel this Halloween (or IRL), you better have an Andy Cohen by your side with a crew of other Housewives. Because are you really a Real Housewife without a group of other questionably fashionable, very opinionated women alongside you tossing back wine, ready to scream at one another like you’re filming a reunion?! (The answer would be no).

Do you love the Real Housewives franchise as much as I do? What city and which Housewives are your faves? Most important of all, who will you be going as for Halloween? Let us know the answer to all these questions in the comments.