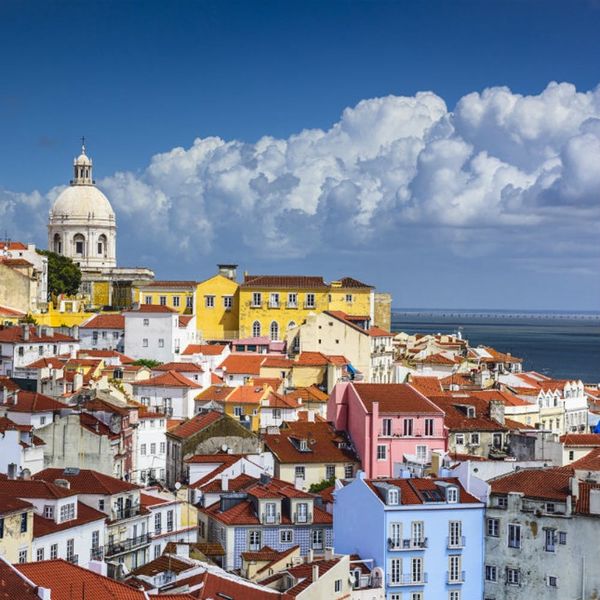 Nearly every year, we make the same New Year’s resolutions: Get healthier, save more money and enjoy life to the fullest. But while you’re focused on finding easy ways to travel more to enjoy the present, you’re potentially setting yourself up for a major fail at getting your budget under control. More than any other generation, millennials are seeking uncommon adventures, cultural immersion and seriously cheap vacations (according to Yahoo! Travel). And you can have it all in 2017. Here are our top six picks for affordable destinations that really deliver.

1. Portugal: There are plenty of local traditions, picturesque towns and hearty cuisine to keep every kind of traveler busy exploring this small country, known for the best budget hotels in Europe. Take in the narrow, cobbled streets, the exteriors covered in azulejo (traditional tin-glazed ceramic tiles), funky street art and insanely beautiful panoramas in the capital city, Lisbon. Stay at The Independente, a refurbished 19th-century mansion with a hip vibe, for less than $100/night. Then head to Peniche to surf world-class waves, drink some amazing port and red wine in the Douro Valley (a full-day tour will only set you back about $50) or head south to Vila Real de Santo António or Olhão for some off-the-beaten-path (read: less crowded and cheaper) beach time.

2. Namibia: Adventurous travelers who dream of going on an African safari but can’t quite stomach the expense will find their ultimate DIY safari in the beautiful southwest African country of Namibia. Rent a truck (complete with a roof tent to keep the wildlife… like lions… out) and camp your way across the wildlife sanctuary of Etosha National Park (full of big cats, black rhinos and elephants), ruggedly beautiful Damaraland and the stunning red and burnt-orange sand dunes of Sossusvlei. Although most campsites in Namibia (about $10 a night) are WAY better than the ones we have in the US (hello, private bathroom and kitchen), aim to stay at private campgrounds, which offer large shade canopies, swimming pools and WiFi.

3. Asheville, NC: Nestled into the Blue Ridge Mountains, Asheville has three things we can always get behind: dramatic natural beauty, delicious microbrews and delectable Southern food. The small city has a large contingent of artists, so leisurely browsing the 180 artist studios in the River Arts District is an afternoon well spent. Asheville also boasts more microbreweries per capita than anywhere else in the US, and the restaurant scene favors seasonal produce and locally sourced food.

For the perfect cheap day, fill up for less than $10 at Early Girl Eatery and White Duck Taco Shop, wash it down at Green Man Brewery and Wedge Brewing (most pints are $4), and dance it off at The Orange Peel or one of the many lively street performances that fill downtown Asheville on Friday nights. Before you leave, explore the Blue Ridge Parkway, almost 500 miles of scenic vista points and detours to secret swimming holes, hikes (Mount Pisgah is a bucket-list climb) and wildlife — free for you to enjoy.

4. Bosnia and Herzegovina: Croatia has gotten all the attention for too long. The Balkan state of Bosnia is an intriguing mix of Ottoman, Austro-Hungarian and Yugoslav influences. You’ll see that on display in the small town of Mostar, where the skyline is dotted with church steeples and the minarets of local mosques. Stari Most (Old Bridge) — a pale stone arch across the crystal-clear, emerald-green Neretva River — is the main attraction. A two-hour train or bus trip through the scenic Neretva Valley to Sarajevo will have you wondering why you’ve never heard about the raw beauty of Bosnia before.

Sarajevo is a sophisticated city with its history on display, from its traditional Ottoman market design to bullet holes scarring buildings on every block. Hike up to the Yellow Fort for sunset, savor a meal at the new restaurant Žara iz duvara, and try not to overdo it on the Bosnian coffee (don’t call it Turkish!) — a thick, potent brew served with sugar cubes in traditional carved and copper-plated metal sets.

5. Berlin, Germany: The former mayor of Berlin called it “poor but sexy,” and the sentiment still rings true, even as the ubercool bohemian party city aims to become the Silicon Valley of Europe. Much of Berlin isn’t classically pretty, but it’s oozing history. Free picks that’ll have you feeling like a local: Explore the city by bike, tour the Reichstag Dome, have a picnic in Tiergarten or Tempelhofer Park, take in some art on an old portion of the Berlin Wall at the East Side Gallery and, on summer nights, buy some beers at a corner store and relax along the bank of the canal.

There are plenty of budget hotels and Airbnbs in upcoming areas, like Wedding, a Turkish neighborhood that’s becoming hip with a young crowd. You’ll find affordable beer, Turkish döner kebabs and German eats at neighborhood spots like Vagabund Brauerei, Pamfilya and Fünf & Sechzig.

6. Isle Royale National Park, Michigan: Michigan’s Upper Peninsula has been the Midwest’s little secret until recently. For lovers of the outdoors who want to have an entire island practically to themselves, there’s no better vacation than Isle Royale National Park, which gets less visitors all year than Yellowstone does in one day. Take a ferry or sea plane ($220 one-way, but how cool is that?) to Rock Harbor or Windigo, and camp at one of 36 campgrounds or stay at the rustic Windigo Camper Cabins (about $50).

Wander the 165 miles of hiking trails through the forested island, stop by the historic copper mine, and try to spot moose, red foxes, mink and snowshoe hare, which all call the island their home. For a true day on the lake, rent a kayak or canoe, or brave the chilly waters for some great scuba diving. Bonus: The park is so far north that, if you time your trip right, the Northern Lights will put on a show for you.

Are you planning a budget vacation in 2017? Tell us where you’re heading @BritandCo!

Whitney Akers
Whitney is a writer that's equally drawn to the energy of a big city and the peacefulness of the Redwoods. If she's not lucky enough to be on an international adventure, you'll find Whitney enjoying all the urban hikes, used bookstores and fancy cocktails San Francisco has to offer.
Budget-Friendly
Travel
Budget-Friendly Hit Refresh