Trump’s Anger Over the Spending Bill Was All About the Wall, Not DACA 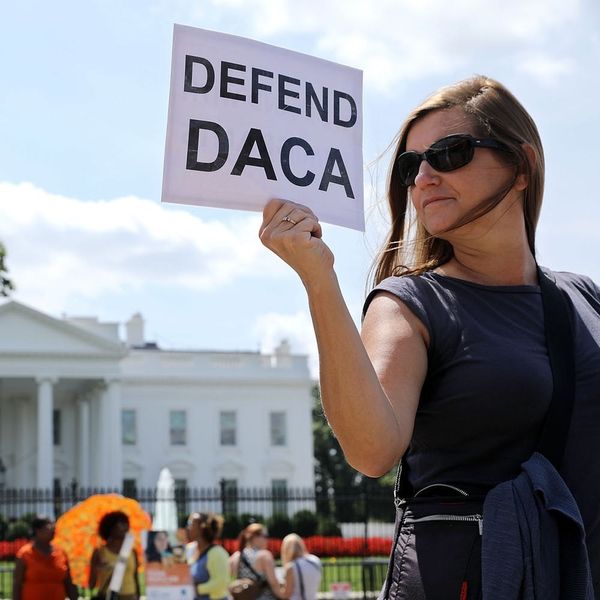 The president was clearly upset over signing the bill that keeps the government funded through September, and we know this because he couldn’t stop tweeting about it. He threatened to veto it a day before reluctantly signing, and after he eventually caved, he vowed to never sign a bill like that again.

So what’s got him so irked? Trump got the $700 million that he requested for the military, $500 million going toward the dealing with the opioid crisis, and $1.6 billion will go towards his “big, fat beautiful wall” (which is actually a fence, but more on that later) on the Mexican border – among many other things. But there’s one significant thing he wanted, which was unequivocally denied by Congress.

Dems have made good faith efforts to resolve this crisis. We’ve agreed to support flawed bills that include provisions we oppose, like funding a border wall, and the president has still said ‘no.’ If there is no DACA fix today it’s because the president didn’t want one.

If you were to believe his tweets, you’d think Trump was angry that Deferred Action for Childhood Arrivals program wasn’t on the bill. “Much can be done with the $1.6 Billion given to building and fixing the border wall. It is just a down payment. Work will start immediately. The rest of the money will come – and remember DACA, the Democrats abandoned you (but we will not)!” he tweeted.

Seems Trump was upset that DACA recipients would be left out in the cold, even though he is the one that rescinded the Obama-era program last year. While Trump did get $1.6 billion for the border wall, he actually requested much more than that. Trump needs a total of $18 billion to build the wall he wants — and those are just the initial costs.

According to a report by Bernstein Research, Trump needs something more along the lines of $25 billion. Last year, The New York Times reported that estimations were in the ballpark of “$70 billion to build and $150 million a year to maintain.” So $1.6 billion is nothing compared to what he really needs. As he said himself, it’s just a “down payment.” But Congress isn’t willing to give him the funds he needs, especially if he’s using DACA as bait.

After the passing of Today's funding deal, it's almost certain that DACA will NOT be addressed until after the mid-terms

This is actually a win for DACA since the Judiciary appears to be on its side. It will also help get people out to vote democrat as 80% of voters are pro-DACA

The president maintained that if Congress gave him the money for the border wall, he would sign a resolution for the Dreamers. But that kind of collateral isn’t something Democratic lawmakers are willing to agree to, particularly because what Trump offered would guarantee Dreamers only three more years of protection. His conditions didn’t say anything about a longterm fix on DACA. As of now, without the support of Trump, Dreamers are still protected for two more years since two federal judges sided with DACA recipients. So Trump’s DACA offer isn’t actually worth $25 billion in funds for the wall, according to the congressional majority.

Another thorn in Trump’s side is the fact that the bill doesn’t include funding for “the wall” but rather for “fencing.” That kind of rhetorical difference means a lot, given Trump’s grandiose boasts — a wall sounds a lot more impressive than a fence. But Congress is simply being realistic about what the increase in border security will look like.

According to Vox, Congress is “appropriating $445 million for 25 miles of levee fencing in the Rio Grande Valley (and another $196 million for an unspecified amount of regular pedestrian fencing there); $251 million to replace 14 miles of existing secondary fencing in the San Diego sector; and $445 million to replace an unspecified amount more of pedestrian fencing.”

That doesn’t sound anything like what Trump originally wanted – but we digress.

DACA was abandoned by the Democrats. Very unfair to them! Would have been tied to desperately needed Wall.

Trump may continue to tweet that Democrats didn’t want to support the Dreamers, but the spending bill speaks for itself.