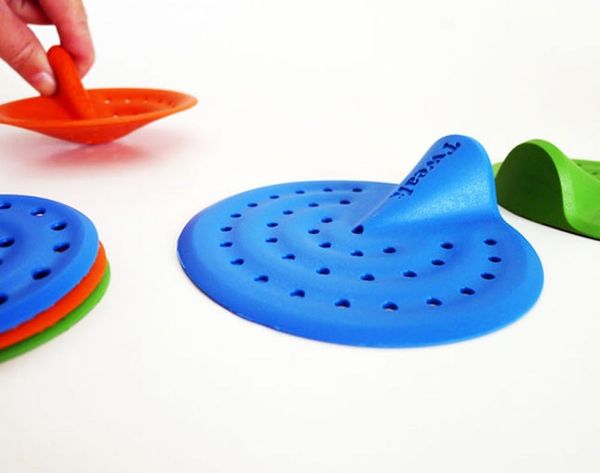 So, you’ve finished doing the dishes and there in your drain is a pile of leftover scraps. From peas and noodles to granola and salmon, it’s a disgusting smorgasbord that no one wants to touch. Digging it out of the drain becomes the worst part of the clean-up. Enter Tweak, a brilliant drain cover that effortlessly disposes of all that ick without you ever having to touch it!

Invented by two guys who were tired of scraping out drains with their bare fingers, this colorful plastic cover works by allowing you to squeeze the cover one way while carrying it to the trash. Then, with a simple press, it releases all that food into the trash, leaving your fingers clean and slime-free!

The design features a little handle that rises about the surface keeping your fingers a safe distance away from soggy garbage. It then flips inside out when you are ready to empty it. Tweak comes in four bold colors to brighten up your drain and in two different sizes if you want to throw one in the shower and get really grossed out by how much hair it collects. Each crud catcher is made out of silicon, which keeps it snugly in place whether you’re using it in your kitchen sink or tub drain.

The product is still in its fundraising stages over on Kickstarter, but the designers have already reached four times their goal, and we are can hardly wait until these little drains hit the shelves and save our hands from leftover nightmares! And if you want to see something incredibly adorable, check out their Seussian fundraising vid.

Would you use Tweak in your kitchen sink? Let us know in the comments below!

Kate Thorn
Kate Thorn is an illustrator, foodie, photographer, and blogger at Create & Kate. She loves creating art, traveling, and all things chocolate. A native to the Great Northwest, she is currently living in London and pretending to be a mature grad student.
Design
Most Recent
Design Kickstarter Kitchen