12 Under the Sea Costumes for Your Pup 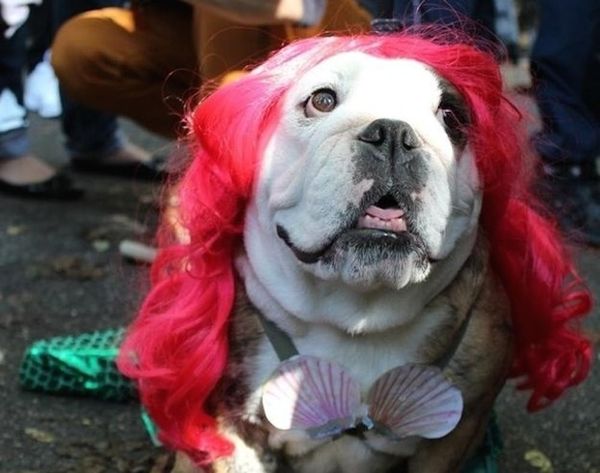 Okay, we have to admit something. We’ve always been slightly uncomfortable with the ocean, despite the fact that we wanted to beAriel from TheLittle Mermaid at one point. Not afraid of it, just not willing to risk CERTAIN DEATH. Anyway, we’re pretty sure all of your dogs are going to hate you and the ocean after you put them in these adorable sea monster outfits this Halloween. Worth it.

1. Hammerhead Shark ($17): You can be Shark Week and your dog can be having the best day of his ever-loving life in this hammerhead shark costume.

2. The Little Mermaid: Those flowing locks, that clamshell brassiere and that shiny green tail — we’d know Ariel anywhere! Prince Eric could never resist that bulldog face. I wonder if she can sing? If you don’t want to DIY, you can buy a mermaid costume here. (via Washington Post)

3. Gator Dog ($20): This alligator costume is made to be comfortable for the pups, and this guy looks like he wants to wear it all year round. You could go Crocodile Dundee or Captain Hook with this one!

5. Scuba Diver: This chihuahua dressed up in full scuba gear for charity. He’ll go to the ends of the earth and the depths of the ocean to raise money for a good cause. (via PagHat)

6. Lobster ($10): Leave it to a corgi to look majestic in a lobster costume — so majestic he became a meme. If you want to buy your own little red lobster, you can grab a suit here or here. (via Ensunsett)

8. Octopus ($20): What has eight legs and will cause your dog to chase itself in circles all night? This adorable octopus costume!

10. Baby Seal: We’ve always wanted a baby seal as a pet but, little did we know, we already had one!

11. Submarine: Chompers the Corgi takes it under the sea with this yellow submarine costume, which we think will pair perfectly with your Ringo Starr costume!

Is your dog going under the sea this Halloween? Share the pics with us @britandco!