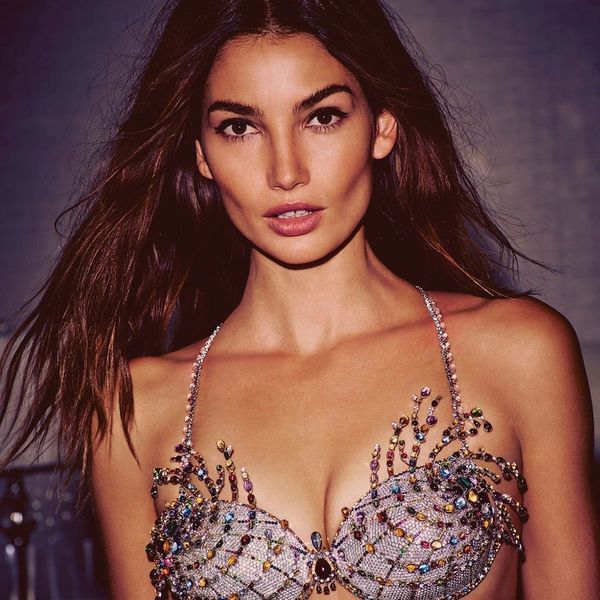 With a couple of new additions to the Victoria’s Secret Angel Crew (Gigi Hadid and Kendall Jenner) and a last minute dropout (Rihanna), the web has been all abuzz about who will or will not walk down the catwalk at Victoria Secret’s Annual Fashion Show on December 8. While a lot about the show seems to be tentative, one thing is certain: There will be a $2 million dollar bra on display and VS model Lily Aldridge will be the lucky lady who gets to wear it.

In a video released by Vogue, we’re offered a sneak peek of this year’s oh-so-sparkly “Fireworks Fantasy Bra.” According to the publication, the bra – crafted by the label’s traditional jeweler Mouawad – is made from more than 6,500 precious gems and took a whopping 685 hours of labor to put together.

With over 14 different precious gems featured on the demi-cut bra, you’ll find everything from blue topaz to garnet to yellow sapphire. And if that’s not quite luxe enough for your liking, it’s all set in 18-karat gold. Oh and as far as carats go, it weighs in at 375-carats altogether. Just to put that in perspective, Lady Gaga’s GIANT engagement ring is a mere 6-carats. The grand total? A meager $2 million. BRB, we’re just going to go and empty our piggy banks real quick. That’s sure to cover it, right?

What’s the most you’ve ever spent on a bra? Dish the deets with us in the comments below.

Cortney Clift
Cortney is the senior writer and special projects editor at Brit + Co. She typically covers topics related to women's issues, politics, and lifestyle. When she's not buried behind her computer you'll find her exploring New York City or planning her next big adventure.
Lingerie
Fashion
Lingerie
More From Fashion