Why Virtual Reality Is a Game-Changer for My Meditation Practice 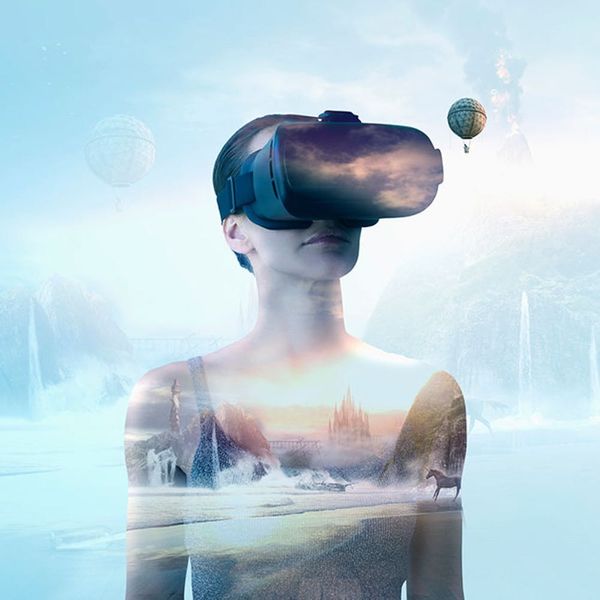 Virtual reality is cropping up everywhere, so it only makes sense that this immersive technology would eventually make a foray into meditation. But what’s it like to meditate with more than just your own consciousness to help you along? Is VR-assisted meditation distracting? Strange? Peaceful? When the folks at Oculus Go offered to let me try out the Guided Meditation app on their VR headset, I had the chance to find out.

Upon first learning about this app, I was a bit skeptical about how I would like it. In my previous experiences with virtual reality, I’ve basically been the person you see in embarrassing YouTube videos groping the air in front of them blindly and screaming in terror on imaginary roller coasters. Plus, I’m more than a little bit claustrophobic, so I harbored some concerns that I might want to rip the device off my head before I even got started.

But I did it anyway, fueled by the belief that new experiences are good for me. Perhaps this app could serve as an interesting avenue for stress relief, I thought, or a helpful tool for overcoming some of the challenges I face in meditation. Here’s what happened…

Slipping the headset over my eyes for the first time, I was surprised that the device felt quite comfortable, a bit like an extra heavy eye pillow. (I later discovered Oculus Go’s designers worked with professionals in athletic and intimate apparel to create a soft, breathable fabric for the headset.) When the screen zapped to life, I did have a tiny adjustment period while my fear of confined spaces flared up — but this feeling soon passed as I opened the meditation app and saw beautiful nature vistas stretching out in every direction before me.

Upon entering the app, I discovered I was able to choose my own meditative adventure by customizing every aspect of my experience. I could select from dozens of options for the background music I wanted piped in through Oculus Go’s high-quality speakers above my ears. The length of time I wanted to spend in an environment was up to me, from five minutes to “infinite.” I got to choose whether I’d prefer a guided meditation (and what type, like one geared to depression, a ten-day series for focus, and dozens of others) — or just to chill on my own, unguided. And of course, I could decide the environment itself. Did I want to relax creek-side on a grassy mountaintop? Take in the simple serenity of a Polynesian beach? Or bliss out in a zen-like indoor retreat space?

With all the options, I probably spent a full five minutes just picking out what to try first. It all looked so appealing, but I eventually settled on a loving-kindness meditation, seated on a padded bench overlooking the ocean. The soothing voice of my guide began to speak words of encouragement, reminding me to have grace for my mistakes. Lulled by these loving reminders, I remained in the environment even after the guided portion ended, listening to my breath. When I finally removed the headset, I was shocked to realize I had spent nearly 40 minutes meditating. (I’m usually more of a “15-minutes-is-excruciatingly-long” type gal.)

As I’ve begun to incorporate virtual reality into my meditation practice, I can’t say I’ve tried every permutation and combination Oculus Go’s app has to offer, but I’ve certainly experienced enough to know that it has opened up a whole new world of possibility for me. Like many people, I struggle when meditating on my own. Even in the quiet of my bedroom, the piles of laundry at the foot of my bed call out to be put away. I stare out the window and see all the work that needs to be done in my backyard. My mind wanders so far that it needs to be pushed back into the moment with a mental bulldozer rather than the gentle nudge so often described in guided meditation.

Putting on my VR headset has a way of miraculously peeling away these struggles. It transports me, convincing my brain that I really am on a Polynesian beach where my kids won’t barge in screaming and my deadlines are thousands of miles away. With so much beauty to view in 360-degree panorama (complete with subtle movements of wind and waves) and the gong of Tibetan bowl music in my ears, I find my mind harnessed to the present. Though it’s still a relatively new part of my practice, I’m already finding it to be my favorite meditation tool.

In addition to offering an extremely immersive experience, VR guided meditation allows me another freedom that a YouTube video or other recording typically doesn’t: the ability to stay in an environment even after a spoken guided portion ends. Personally, I find that it takes me a really long time to settle my mind, so that it’s only toward the end of a guided session that I truly feel I’m meditating. Yet typically, when a time-constrained video ends, I hop up immediately to get back to my day. Staying in a visual and audio space allows me to deepen my practice to experience some of my best, most rejuvenating solo meditation.

Of course, VR meditation isn’t perfect and does come with a few drawbacks. By necessity, the Oculus Go is a big-ish device that attaches to your face, so you may feel that wearing it makes you look like a character in a sci-fi movie. (Until the day when technology enables VR devices to look like adorable sunglasses, I’m a bit too self-conscious to use mine in public.) And though the graphics in the guided meditation app are absorbing enough to convince my brain of their reality, their rendering isn’t 100 percent realistic; they can feel a tad cartoonish.

These issues aside, I’m thrilled to have discovered virtual reality meditation. With its totally customizable sessions and immersive engagement of the senses, it’s my own private world of peace. I daily look forward to the time I get to spend “away from it all” in the comfort of my own home.

Have you tried VR meditation? Tweet us at @BritandCo!

From Your Site Articles
Sarah Garone
Sarah Garone is a mom, wife, nutritionist, and freelance writer in Mesa, AZ. She loves music and travel, speaks fluent German, and does a lot of running (to counterbalance the surprising amount of cookies she eats for being a nutritionist). Find her sharing great recipes and helpful nutrition info at A Love Letter to Food.
Healthy Living
Health
Healthy Living Mental Health Self Self Care Womens Health
More From Health