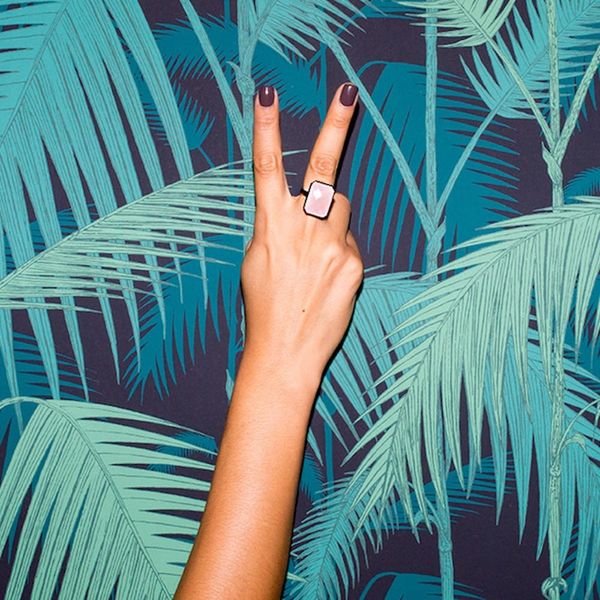 Nothing says 2015 holidays more than some wearable tech (we’re living in the future, guys!). This holiday season, you can deck out your loved ones with lots of cool devices that would make Inspector Gadget jealous. We have them all right here in one handy, dandy gift guide — everything from geektastic activity trackers to slyly chic jewelry that does double tech duty. Welcome to Brit + Co’s official 2015 Wearable Tech Gift Guide. Go forth and prosper.

1. ROAR’s Athena Safety Wearable ($79+): This wearable just completed a successful Indiegogo campaign (shipping out in May!). The silver-dollar-sized device easily clips on to your clothing or bag and packs a loud alarm when pressed to ward off assaults. It’ll also shoot a text message to your preset contacts that you’re in danger. In other words, it could save your life.

2. Thync Kit ($199): Thync is a groundbreaking neuroscience wearable. It’s a small device that you can wear on your temple. Using its corresponding smartphone app, it determines whether you’d like to feel calm or more alert, and the device will transmit low-energy waveforms that safely signal nerves on your face and head that then either stimulate or relax your brain. Cool, huh?

3. Lockett Smartphone Memory Necklace ($75+): This might only be a Kickstarter now (12 days to go, so get on it and spread the word!), but we promise the recipient is gonna love it. Using NFC tech, this necklace will store links to photos, websites, videos or more that, with a quick scan of a smartphone app, will take the phone to that site. It’s literally a digital locket for the 21st century.

4. Ringly Daybreak Ring ($195): This pink calcedony stunner from Ringly isn’t just a semi-precious statement ring, but it actually links up to your phone and alerts you with different colored flashing lights when you have a text/call/email. Never miss anything again.

5. Sony SmartWatch 3 ($250): One of the highest ranked Android smartwatches out there, the Sony Smartwatch 3 is stylish and super functional. You can use the apps on the watch wherever there is WiFi, and you don’t even need to carry your phone with you. Of course, this timepiece also doubles as a fitness tracker, and you can even pair it with a bluetooth headset for music.

6. Apple Watch ($349+): We couldn’t very well have a wearable tech gift guide without the Apple Watch now, could we? According Apple’s own site, to wear the Apple Watch is to love it. Sync it up with your iPhone and you can text your friend, FaceTime family, track your health, access apps and so much more from this little device.

7. Vinaya Altruis Rose Gold + White Necklace ($430): This gorgeous notification necklace features a white ceramic Altruis stone pendant and links up to your cell phone via Bluetooth. A corresponding smartphone app allows you to set which emails and calls and upcoming meetings are important enough to cause the pendant to vibrate, so you can put your phone away and have peace of mind you won’t miss something important.

8. Microsoft Band 2 ($250): This is still one of the most versatile activity trackers on the market. Not only does it monitor your steps, sleep and workouts, but it also tracks your altitude and has a silent vibration alarm to wake you up when you’re sleeping. Oh yeah, it also syncs to your phone and alerts you of emails and texts too. Is there anything this incredible wearable doesn’t do?

9. FRENDS x BaubleBar Taylor Headphones ($235): These Taylor headphones aren’t just shiny and stunning — they also pack quite a sound. You can also swap out the caps on the headphones for another design that comes with the set, so they’re versatile too. Bonus: they come with a pair of matching BaubleBar earrings.

11. OM SmartKit ($275): The OM SmartKit is a whole new take on activity tracker and wearable tech. It’s an actual tee + OMBox + phone app combo that will work together to help read your vitals when you’re working out. The shirt will send information to the OMBox, which will then transmit that data to your smartphone app. Cool, huh?

12. Bellabeat Leaf Wearable ($120): The Bellabeat Leaf might just be the prettiest fitness and activity tracker you’ll ever lay eyes on. You can wear it on a chain like a pendant or even snap it onto your clothing. The gadget will also monitor your sleep habits, log your period cycles and analyze your breathing for stress reduction. It sure is smart.

13. Fitbit Charge HR ($150): Most times, when someone says fitness wearable, you think “Fitbit” — and for good reason. The Fitbit Charge HR tracks your heart rate, sleep and activity. When someone calls your phone, you also get caller ID notifications on your band and a built-in alarm clock so you can wake up and get going with your day.

14. Samsung Gear VR ($100): This takes your Netflix to a whole new level. The Gear VR headset pairs with a number of Samsung phones and gives you a 360-degree panoramic view that allows you to feel like you’re right in the middle of all the action. There are hundreds of movies and TV shows on Oculus TV that you can watch in a whole new way.

15. Rebecca Minkoff Notification Bracelets ($120): No one would ever guess this chic gold link bracelet by Rebecca Minkoff serves a second high-tech purpose. It connects to your phone via Bluetooth and you can program it with up to 25 of your most important contacts, so when you get a message/call from them, your bracelet can discreetly notify you.

What wearable tech were you planning on getting the techie in your life for the holidays? Tweet us your recs @BritandCo!

Kimberly Wang
Kimberly Wang writes about all things pop culture, tech, style, and beauty. She's a Bay Area transplant and has an MFA in Creative Writing from Columbia University. On a sunny New York day, you can find her hanging out with her mini schnauzer Isabelle Jellybean on a blanket in Central Park.
Gifts
Tech
Gifts Wearable Tech
More From Tech