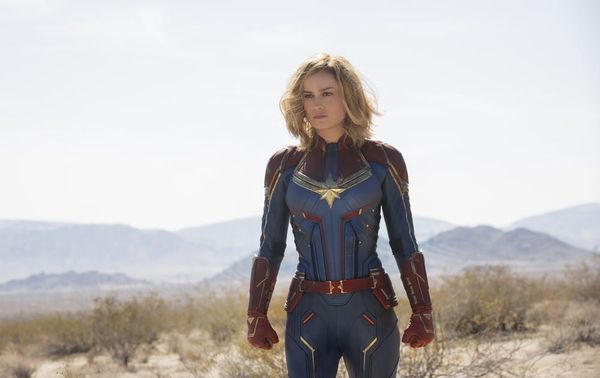 Welcome to Brit + Co’s Weekly Entertainment Planner! Each Monday, we highlight one thing we’re excited about in six categories — movies, TV, music, streaming services, podcasts, and a bonus pick from all of the above — to help you navigate your week in watching and listening. Check out our picks for the week of March 4 to 10 below. Your eyes and your ears will thank us!

Captain Marvel (March 8): Brie Larson stars as Carol Danvers, AKA Captain Marvel, in what is not only the MCU’s first feature led by a woman, but also one of the most anticipated movies of the year. In the film, Danvers finds herself in the midst of the long-running rivalry between the Kree and Skrull alien races — which she vows to end. Check it out in theaters on Friday, March 8. (Photo via Chuck Zlotnick/Marvel Studios)

The Real Housewives of New York City, Season 11 (March 6): Bethenny Frankel, Luann de Lesseps, Ramona Singer, Dorinda Medley, and more return for another dramatic season of RHONY — which will include a major feud between Frankel and de Lesseps. Barbara Kavovit also joins the cast this season, while former Housewife Jill Zarin is set to make a guest appearance. Season 11 premieres on Bravo on Wednesday, March 6. (Photo via Rodolfo Martinez/Bravo)

Walk. Ride. Rodeo. (March 8): When rodeo champion Amberley Snyder was 19, her truck slid off the road and ejected her from her seat, leaving her paralyzed from the waist down. It seemed as though she would never ride again, but Snyder overcame the odds — and Netflix’s Walk. Ride. Rodeo. is the inspiring true story of how she did it. (Photo via Greg Peters/Netflix)

To Live and Die in LA: From Tenderfoot — the same company that brought you the addictive true-crime podcasts Atlanta Monster and Up and Vanished — comes To Live and Die in LA, another investigative look at a real-life case. Rolling Stone contributing editor Neil Strauss reports on the mysterious February 2018 disappearance of 25-year-old model and actress Adea Shabani, who seemingly vanished from her Hollywood apartment. You can listen online, or subscribe wherever you get your podcasts.

The Jonas Brothers, “Sucker”: The JoBros are officially back, after announcing their reunion on Thursday, February 28, in a special Carpool Karaoke video with James Corden. So far, Joe, Nick, and Kevin have released just one new song “Sucker,” but more will surely follow soon. And as a bonus, the Jonas Brothers will be on your TV all week as they stage a takeover of TheLate Late Show. As a double bonus, the music video for the new track stars Priyanka Chopra, Sophie Turner, and Danielle Jonas.

Tin Star, Season 2 (March 8): Amazon Prime Video airs this underrated British TV show for those of us not in the UK. Season 2 picks up with Jim Worth (Tim Roth) in the remote Canadian Rockies wilderness as he and his family deal with the fallout of their tumultuous relocation — and the personal demons it unleashed — in season 1. Christina Hendricks, Genevieve O’Reilly, and Abigail Lawrie also star. (Photo via Michelle Faye Fraser/Amazon Prime Video)