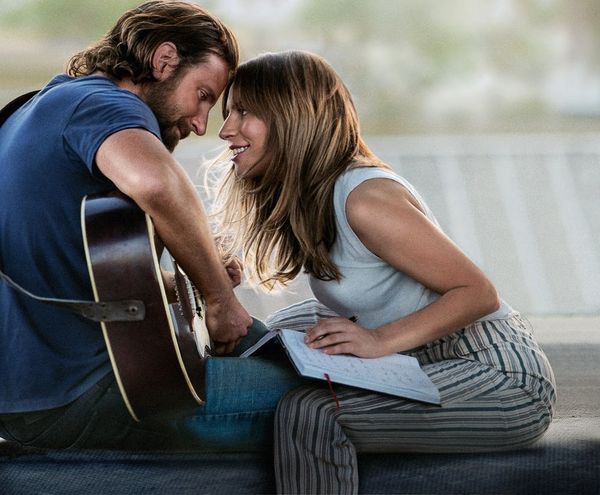 Welcome to Brit + Co’s Weekly Entertainment Planner! Each Monday, we highlight one thing we’re excited about in six categories — movies, TV, music, streaming services, podcasts, and a bonus pick from all of the above — to help you navigate your week in watching and listening. Check out our picks for the week of October 1 to 7 below. Your eyes and your ears will thank us!

A Star Is Born (October 5): It’s been four long months since we saw the first official trailer for the Lady Gaga and Bradley Cooper-starring drama, and in the time since, it’s garnered critical acclaim, Oscar buzz, and even more feverish anticipation. This week, it’s finally here. We’ll see you all at the theater on Friday, October 5. Save us a seat. (Photo via Neal Preston/Warner Bros. Pictures)

Station 19 (October 4): Season 2 of the latest Grey’s Anatomy spinoff will pick up where season 1’s cliffhanger left off — determining the fates of the Station 19 firefighters. Travis (Jay Hayden), Jack (Grey Damon), Vic (Barrett Doss), and Ben (Jason George), were trapped in a raging skyscraper fire when we last saw them, and the premiere episode will go right back to the blazing chaos. Check it out on Thursday, October 4, at 9pm on ABC. (Photo via ABC/Derek Johnson)

Private Life (October 5): Kathryn Hahn and Paul Giamatti star as a middle-aged married couple who find themselves at their wit’s end of an ongoing struggle to have children. It’s definitely a heartbreaker, but it’s also warm and hilarious, making Netflix is ready to continue its streak of original movie gold. Check it out on October 5. (Photo via Jojo Whilden/Netflix)

Articles of Interest: A new six-part series from the people behind 99% Invisible explores something that affects all of our daily lives: our clothes. The show looks at what we wear and why, and episodes will focus on everything from kids’ clothes to the sustainability of the modern clothing industry. You can check it out online, or subscribe wherever you get your podcasts.

iHeartRadio Music Festival (October 7): Justin Timberlake, Carrie Underwood, Mariah Carey, Imagine Dragons, Jason Aldean, Panic! At the Disco, Kelly Clarkson, Kygo, Rae Sremmurd, and more will perform at one of the biggest live concert events at the year. The show took place in Las Vegas in September, and now you get to watch it all on Sunday, October 7, from 8:00 to 10:00pm ET/PT on the CW. (Photo via Kevin Winter/Getty Images for iHeartMedia)

Super Mario Party (October 5): One of the classic Mario video games from your childhood is getting a complete refresh for its launch on Nintendo Switch. The four-player game will maintain the original board gameplay, but new features like character-specific dice blocks, new modes and boards, and mini games galore take it to a whole new (but just as addictive!) level. Check it out on Nintendo Switch starting on October 5. (Photo via Nintendo)