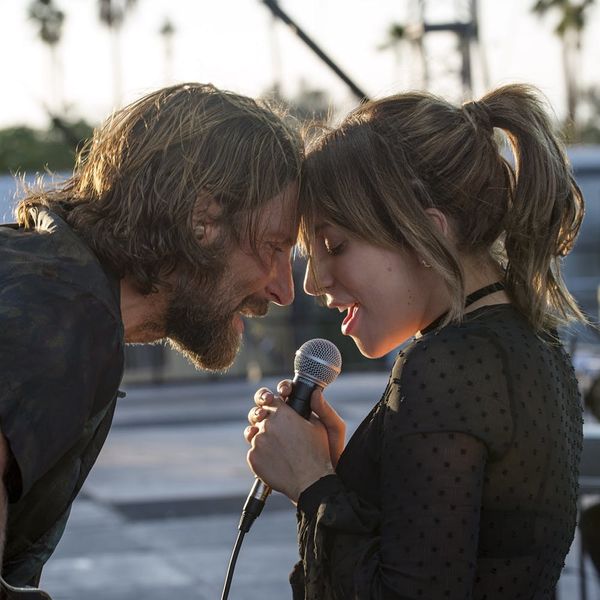 The first official trailer for A Star Is Born is finally here, and it was more than worth the wait. The film, which marks Bradley Cooper’s directorial debut, is a remake of the 1937 movie (and subsequent musicals), with Cooper and Lady Gaga in the leading roles.

Cooper plays a famous country-music star named Jackson Maine, who is battling personal and professional demons when he meets Ally (Gaga), an up-and-coming singer who’s dealing with her own struggles. The two fall in love, and with his help, she gains the confidence to take the stage, even as his time in the spotlight is fading.

Gaga and Cooper reportedly wrote the songs together, with additional help from artists such as Lukas Nelson, Jason Isbell, and Mark Ronson. Gaga also insisted that all performers sing live, so she and Cooper showed up at Coachella and Glastonbury to film scenes in front of actual festival audiences.

“She said, ‘What I cannot stand in movies is when it’s playback and you can see they’re lip-syncing. We’re going to sing live,'” Cooper said during an appearance at CinemaConUSA back in April, according to USA Today. He added that singing onstage “was the scariest thing.”

The effort seems to have paid off, though, as the movie is already earning Oscar buzz. The original 1937 film, which starred Janet Gaynor and Frederic March, won one Academy Award for Best Writing and was nominated for six others; the 1954 remake with Judy Garland and James Mason earned six nominations; and the 1976 version with Barbra Streisand and Kris Kristofferson won an Oscar for Best Song and was nominated for three others.

A Star Is Born hits theaters on October 5.

Will you be seeing A Star Is Born when it hits theaters? Let us know @BritandCo!