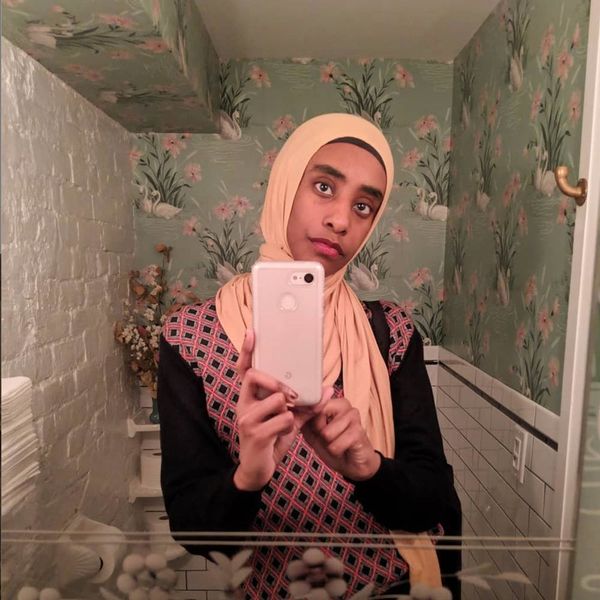 I was born and raised in Canada, where I still reside. So, when I first meet an American, the conversation eventually turns to comparing how we both grew up. It’s fun to list the pop culture differences between the neighboring countries and explain the Canadian concept of bagged milk, but at some point, the discussion usually shifts. Inevitably, people from the US want to hear how Canada was different on a social and economic level — meaning, they’re expecting tales of acceptance, love, and free health care. I know they’re asking because of how I look and identify: I’m a Black, Muslim woman and the child of Somali refugees.

To be fair, people’s assumptions about growing up in Canada are often true. I realize how privileged I have been to live in a country where I have options, and with a family that has built a successful new life after escaping war. In the US and elsewhere, things might have been different. Someone from France once told me that I never could have had the career I do if I’d grown up there, because discrimination against Muslims and Black people is so bad, there’d be no opportunity for me at all.

But the reality is that unless you’re a white Canadian, you’re still considered “the other.” Canada was historically built on colonialism and, to be as clear as possible, racism and genocide. Americans are often surprised to learn that, up until 1996, my country had federally operated residential schools which removed Indigenous children from their own communities to get them to assimilate into white Canadian culture. Canada is only beginning to acknowledge its racist beginnings, whose legacy still disproportionately affects those who are Indigenous to its land. I didn’t learn all of this in school.

As a young Canadian, you’re taught about how your country views itself as a “cultural mosaic.” This means that rather than being a melting pot of cultures that assimilate into something new, the Canadian version of multiculturalism envisions a place where different cultures, religions, races, and ethnicities can coexist without having to lose their cultural values. It sounds great in theory, but now I realize that despite best intentions, it served as a way to avoid having difficult conversations about race, identity, and what it really means to be Canadian.

Acknowledging our cultural mosaic meant talking about how lucky we all were to be in Canada without ever discussing its shortcomings. Whenever I expressed that maybe things weren’t that great all the time, I was met with some version of, “Do you know how lucky you are to be here?” I believed that my feelings of being “othered” were invalid because I lived in Canada and not America, where racism seemed somehow more real and institutionalized. To most Canadians, there is no conversation to be had about race because there are no problems.

As you can imagine, that makes for a confusing way to grow up. And despite the promise of a cultural mosaic, what was considered being a “real” Canadian was (surprise!) white and middle-class. When I decided to wear a hijab in grade eight, I remember classmates flat-out telling me it was a stupid thing to do. Of course, they were children and only parroting what was predominantly seen as acceptable, but now that I’m older and wiser I realize how much of my life shifted after that moment. As a pre-teen and teen, going through puberty is hard enough, but to go through it while expressing and asserting my beliefs in such a public way took a toll.

At a certain point in my early 20s, I had to overcome and unlearn a lot of what I considered ways to survive as a Black Muslim woman. As a teen, I tried to overcome my insecurities as someone who looked and lived differently by using my sense of humor — often making myself the butt of the joke. I let white classmates say things that, now, make me cringe, and I feel sad for letting my past self live “as a joke” and laugh off the pain and confusion I felt. It damaged my self-esteem in ways that I’m only getting over, as someone nearing 30.

I’ve had to make a decision on how to deal with my past, and that meant educating myself about race and white supremacy. Soon, the pain I couldn’t fully acknowledge as a young Muslim turned into rage, which turned into something more productive: understanding myself and where I fit in the world, and challenging the status quo. When Muslims have been killed by white supremacists in their places of worship, it’s even more clear to me that there’s work to be done.