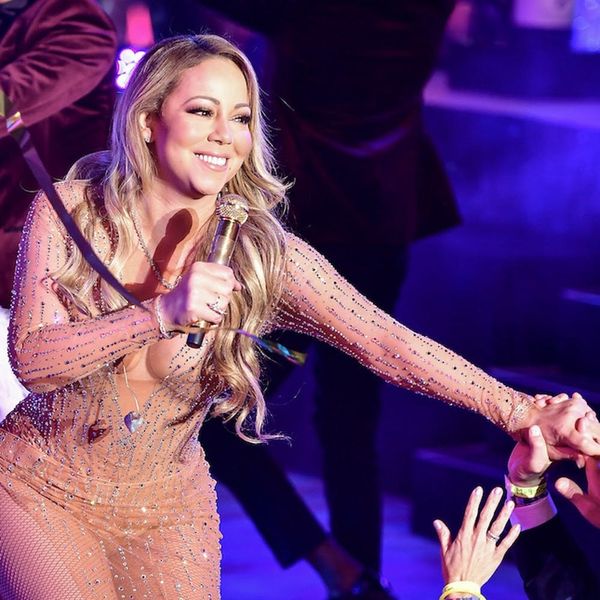 Whether your New Year’s Eve consisted of a DIY photobooth, prepping for the perfect midnight kiss or maybe even BOTH, one thing’s for sure — it was probably better than Mariah Carey’s.

You know by now that her Times Square performance was a total flop due to technical issues — because of malfunctioning ear monitors, she couldn’t hear a thing, and ended up frustratedly attempting to only half-sing a couple of lines from some of her biggest hits. Naturally, everyone had an opinion on it.

But while Mariah did in fact appear initially annoyed (who wouldn’t be?), that grin tells another story. “We didn’t have a soundcheck, but it’s New Year’s baby,” she at one point said to the crowd, not pretending for a minute like it wasn’t happening or that it was in any way the end of the world. “I’m trying to be a good sport here,” she admitted, before admitting that the whole thing was, in its own way, “amazing.”

Mariah is without a doubt one of the greatest divas of all time — in the singing sense, of course, and in her larger-than-life personality. But it’s clear that, even for someone so extravagant, she doesn’t take herself too seriously. Just look at her iconic tweet that followed the derailed performance:

In her first interview since NYE, Mariah told EW that it certainly wouldn’t discourage her from doing live events again, although it will make her “less trusting of using anyone outside of my own team.”

Regardless of who is really at fault for the mishap, it’s likely Mariah would have handled it in much the same way — one doesn’t become Mariah Carey by slinking off the stage and hiding, Ashlee Simpson style, when things go wrong. In the end, haters are always gonna hate, but a few snarky tweets won’t take down Queen Mariah. As she famously said, you just gotta “Shake It Off.”

Do you think Mariah handled the NYE trainwreck well? Let us know over @BritandCo!

Nicole Villeneuve
Nicole is an entertainment and lifestyle writer covering pop culture, news, and cool women doing cool things. She likes yard sales, MTV's Teen Mom, and putting too many memes in the group chat. She lives in Toronto.
Most Recent