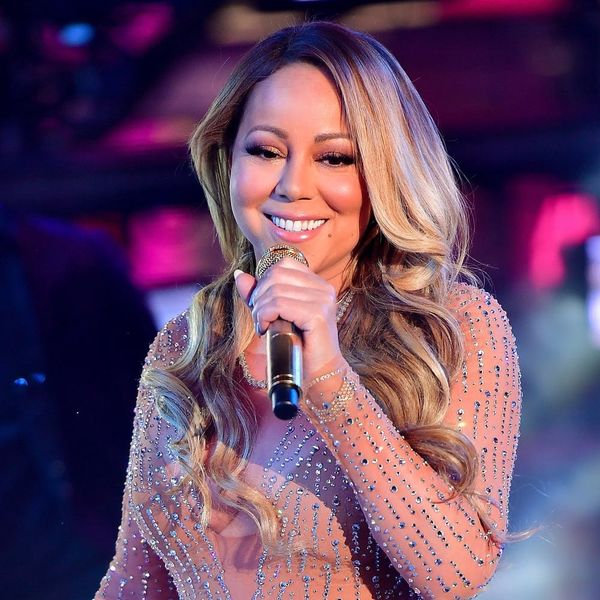 With all of America watching, Mariah Carey took the stage for her much-anticipated New Year’s Eve performance last night. Belting out her own version of “Auld Lang Syne,” everything seemed to be according to plan… for about five seconds. Then, all hell broke loose, and even her new man, backup dancer Bryan Tanaka, couldn’t save her.

Apparently, the singer was experiencing technical difficulties (read: She couldn’t hear), which is kinnnnnddd of a problem when you’re trying to lip sync a song. So, she did exactly what we’d expect Mariah to do: She kept it real.

Telling her dancers to walk her down the stairs, she broke from the performance plan to address the crowd, telling them that she couldn’t hear. She then paused with a *very* annoyed look on her face, before giving it a go with the real-deal vocals. While it sounded great to us, she wasn’t happy, stopping to let the audience sing for pretty much the rest of the song.

“We didn’t have a soundcheck, but it’s New Year’s baby,” she told the crowd, before going through the motions with her dancers (who kept up the schtick the entire time). “I’m trying to be a good sport here,” she said, before concluding, “That was… amazing.”

She gave it a half-hearted lip-synced attempt for “We Belong Together,” but let her mic fall away from her face several times (though the crowd certainly didn’t seem to mind, judging from clips).

She isn’t letting it ruin her New Year, though: In fact, girl beat everybody to the punchline and memed herself!

In that spirt, we’ve compiled 14 of the funniest (if somewhat brutal) reactions to the singer’s faux pas. Enjoy, and happy New Year!

My thoughts and prayers go out to whoever Mariah Carey thinks was responsible for what happened last night. Happy New Year!

2. @cleaduvall: We’ve got a sneaking suspicion that those sound guys might need it.

Everybody is hating on Mariah Carey but she gave 2016 the exact performance it deserved.

5. @nicole_ginzy: It was the year that just wouldn’t quit.

2016 was channeling The Little Mermaid and ended the year by stealing Mariah Carey's voice.

8. @Lord_Voldemort7: You know things are bad when even Lord Voldemort weighs in… perhaps he had something to do with this and is trying a diversion tactic with other villains?

Breaking news: Mariah Carey has just been invited to sing at Trump's inauguration.

How come Mariah Carey gets to do karaoke in Times Square?

2017 is trying to one up 2016 by preemptively killing Mariah Carey on live TV.

13. @FakeDanUggla: It was truly relentless, wasn’t it?

And perhaps, our favorite of all…

Did you watch Mariah’s performance? Share your thoughts on it over @BritandCo!

Nicole Briese
Nicole is the weekend editor for Brit + Co who loves bringing you all the latest buzz. When she's not busy typing away into the wee hours, you can usually find her canoodling with her fur babies, rooting around in a bookstore, or rocking out at a concert of some sort (Guns N' Roses forever!). Check out all her latest musings and past work at nicolebjean.com.
Music
Celebrity News
Music twitter
More From Celebrity News