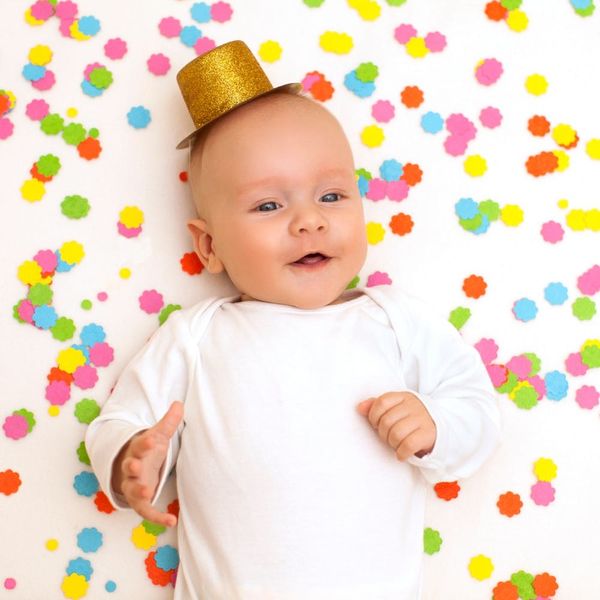 Reality star Maci Bookout isn’t due for a few more weeks, but she’s already shared her son’s name with the world. John Legend and Chrissy Teigen dropped hints, but didn’t reveal Luna’s baby name until the day their daughter arrived. And Prince Carl Philip and Princess Sofia of Sweden stuck to tradition, waiting for King Carl to announce the name during an official government cabinet meeting a few days after the little prince’s birth. There’s no rule about when to announce your baby name, but there are plenty of opinions. Do you announce early, to ensure that your pregnant sister-in-law doesn’t choose the same name? Or do you keep it top secret, to prevent unwanted feedback? Whether you’re a reality star, a royal or just a parent after a great name for the next generation, there are nine possible moments to share your child’s unique baby name.

1. At age thirteen: A lifetime name enthusiast, you called Ava for a girl back in 1996 — way before Heather Locklear or Reese Witherspoon used it. It was important to make sure that your nine-year old sister and both of your best friends knew that it was Your Name. Pros to this approach: Your sister and childhood friends haven’t taken Ava. The downside? Well over 100,000 families that you didn’t know way back when have, and your Ava may end up a Lena anyway.

2. When you got engaged: First came love, then came marriage… but before you got to the altar, you made sure that you’d claimed the family names Henry and Alice, because you have a lot of cousins, and only a few really amazing choices from your family tree. On the plus side, it’s one less decision to make when you do find out you’re expecting. But there’s no guarantee that calling dibs will keep your cousins from shortlisting your favorite names, and that can cause tension at the next big family gathering.

3. When you first started trying to conceive: Maybe you didn’t have baby names on the brain at thirteen, and you were way too busy planning your honeymoon to debate Silas versus Jasper during your engagement. But now that starting a family is next on your list, it’s time to get serious about what you’ll call your new addition. If you and your partner agree, it’s tempting to announce Penelope and Wyatt now. Of course, that leaves months and months for your mom to try to talk you into a more “normal” name, and for your colleagues to point out that Jen in accounting just named her daughter Penelope.

4. Early in your pregnancy: The average pregnancy is around 280 days, which can go by fast. If you’re lucky enough to narrow down your shortlist to a top boy and top girl name, it might feel right to reveal those names when you share the happy news. All the hazards of announcing when you’re first trying to conceive remain, but it’s nice to be able to answer confidently, “Caroline for a girl, Matthew for a boy,” when others ask if you’ve started thinking about names. Of course, that opens the door to 280 days of possibly unwanted feedback.

5. As soon as you find out the gender: From choosing nursery colors to bonding with your baby, there are plenty of good reasons to learn your baby’s sex in advance. Another bonus? It means that you’ll only debate the merits of half as many baby names. If you’ve already settled on a favorite, you can announce it now, and let your aunt start embroidering Arabella on that pink crib blanket. One catch: Some parents get to the delivery room and decide that their Arabella is really more of a Jane.

6. As soon as you decide: Few of us are absolutely certain of our future children’s names years in advance. (If I’d named my kids at thirteen, they’d probably be Barron and Mystina.) Sometime between learning that it’s a boy and actually meeting your son, though, you’ve managed to settle on Kai Nathaniel, and you’re ready to shout it from the rooftops! Of course, your newly pregnant friend — or your thirteen-year old cousin — might protest that Kai is her name. And well-intentioned family members might campaign for you to choose Larry, after your great uncle, instead.

7. By text messages from the hospital: A mere eleven years ago, we called our nearest and dearest to announce the arrival of our son, and sent an email a day or two later. Now we get text messages with the happy news, and usually a full name and picture, too. The positive to this approach is that you’re not getting texts back saying, “Congrats! What did you name her?” The downside? It means you really need to agree on the name prior to going into labor — and that’s not always the way it goes.

9. A few days post-birth, when you get home, put on some mascara and take a picture: We find out tons of our friends’ baby names this way, from Facebook posts and group emails, complete with a picture of an adorable sleeping baby, and exhausted, but beaming new parents. The strengths of waiting a few days are plain. If you were torn between Eloise and Adelaide, you have a little more time to mull over your decision. The negative? Maybe all of those “Have you chosen a name yet? I think Jordan is nice…” comments.

9. At the first big official event: You’ll tell the grandparents immediately, but maybe the world doesn’t need to know until you’ve had time to order the formal birth announcements and schedule the baptism. Sure, this approach is usually reserved for royals, but it might work for families without castles and security details too. Lately, the celebrity approach is to save the baby name reveal for the first post-baby interview. But many cultures have naming ceremonies for newborns, a chance to formally introduce the new addition to family and friends — and to share their full name for the first time.

When did you tell? Tweet us @BritandCo and let us know!