Why Activists Are Boycotting Black Friday in a “Day of Defiance” 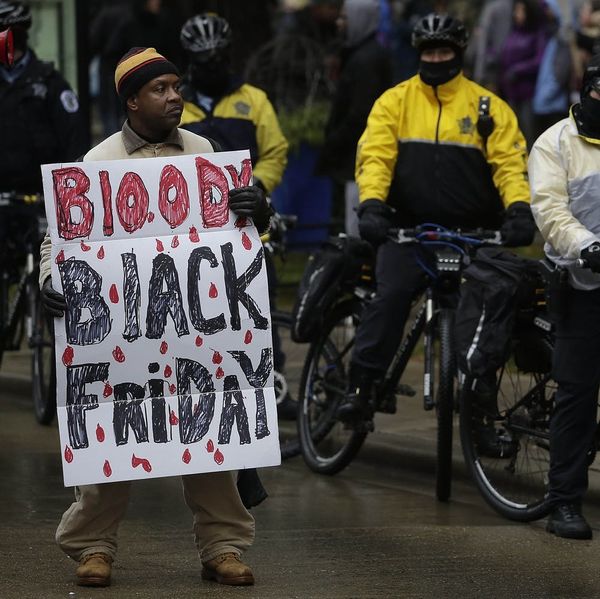 For tens of millions of Americans, the day after Thanksgiving is one of the more exciting days of the year. Black Friday, a longstanding retail tradition, is the magical day when stores open up very early and offer deals on anything from big screen TVs and cars to board games. The day is usually a big win for stores, and shoppers can save on gifts for the winter holidays. But for some, Black Friday is an opportunity not for a great deal, but for civil rights activism.

Following weeks of protests in Ferguson, Missouri in the summer of 2014 over the police killing of 18-year-old Michael Brown, similar protests followed in cities across the country. Fighting back and speaking out against police brutality and killing of Black people, activists from Minnesota to California and beyond took to the streets. When the holiday season approached, some groups decided to take aim at Black Friday, one of the most important days of the year for retailers, to protest police violence.

The first calls to boycott retailers on Black Friday was led by Blackout for Human Rights, a collective focused on raising awareness for police violence; and Not One Dime, a “nationwide boycott focused on racial justice,” according to its website. Activists poured into the streets for the #BoycottBlackFriday, #BlackFridayBlackout, and #NotOneDime campaigns to disrupt regular shopping on Black Friday to raise awareness, and also boycott by not spending money. Not One Dime encouraged protesters not to shop at all on Black Friday, or if they did want to shop, to support black-owned businesses. The Black Friday boycotts have continued since 2014, and some groups around the country have plans for 2017 too.

We are glad that Kim Foxx has exonerated 15 people last week, but we won't stop until ALL victims of police torture are released and their abusers are held accountable. Join us on FRIDAY at 10AM to demand JUSTICE! #DayOfDefiance #CPACNow pic.twitter.com/Suq02rlV0Z

In Chicago, the Chicago Alliance Against Racist and Political Repression (CAARPR), an organization dedicated to ending police violence in Chicago and demanding accountability from police, has called for a day of activism on Black Friday dubbed Day of Defiance. According to the Facebook event page for the Day of Defiance, protesters will gather on the Magnificent Mile, a stretch of largely high-end shops in downtown Chicago to protest police violence, and specifically the police killing of 17-year-old Laquan McDonald in 2014 and the alleged cover-up of the killing.

McDonald was shot 16 times by officer Jason Van Dyke in October of 2014, only a couple of months after Brown was killed in Ferguson, and Chicagoans have used Black Friday shopping on the Magnificent Mile to protest against the Chicago Police Department since 2015. Both in 2015 and last year, protesters blocked entrances to popular stores and gathered in the popular shopping area to speak out about police crimes.

‘Tis the season to #RedistributeThePAIN. ‼️

The national activist group Justice or Else also has called for boycotts on Black Friday this year as in past years. Dubbed Redistribute the Pain, the faith-based group is calling for shoppers not to spend any money on Black Friday, that weekend, or on Cyber Monday to protest racial injustice against black people.

Using Black Friday, a day that’s popular for shopping and leisure, to activate communities to speak out against racism and police violence has officially become a social justice activism tradition. Coming out of massive protests in Ferguson just a few years ago, activists around the country have continued to spend time in the streets rather than money on Black Friday.

Are you boycotting Black Friday or Cyber Monday? Tell us @BritandCo!

Elizabeth King
Elizabeth King is a politics, history, and culture writer based in the Twin Cities. She is generally pretty cranky but still enjoys traveling, music from the early 2000's, and plotting the resistance. Feel free to say hi on Twitter at @ekingc or check out some of her work at www.elizabethcking.com.
Black Friday
Current Events
Black Friday