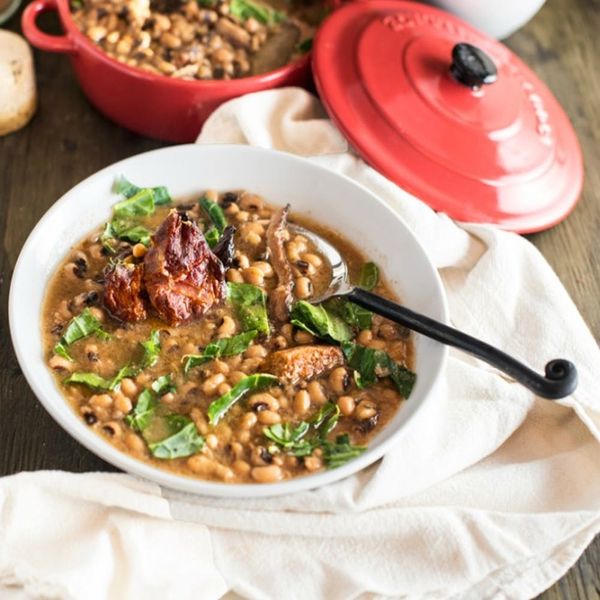 Eating black-eyed peas on January 1 is as much about having a little good fortune on your side as it is about connecting with history. Sure, many think that eating this meal is going to help them manifest a new job, new skill, or even a new relationship in the new year. If you believe, the mindset goes, it will create positive vibes and guarantee that THIS is going to be your year. But to understand the meal and its emphasis on the future, you have to first understand its past.

In a New York Times op-ed entitled “Prosperity Starts With a Pea,” historian Jessica B. Harris explains that the modest meal came to the US from West Africa. She wrote, “After being domesticated there 5,000 years ago, black-eyed peas made their way into the diets of people in virtually all parts of the continent. Then they traveled to the holds of slave ships as food for the enslaved.” The New Year’s meal typically includes peas, greens, and smoked pork. Harris called these key ingredients “one corner from the African American New Year’s culinary trinity.” In the South, the meal is better known as “Hoppin’ John.” And while it’s not completely clear where the name derived from, you can bet a side of cornbread is going to be paired with this dish.

Here’s the significance of each item:

Black-Eyed Peas: They might be small, but the beige and black peas are the main symbol of luck in the meal, which dates back to the Civil War. An article on Today suggests that the peas, formerly used to feed cattle, quickly became a food source in a time of need. During a crucial battle in the war, a town in Mississippi was cut off from food supplies. Close to starvation, the story goes, the residents began eating the peas to survive.

Greens: The dark, thick, leafy greens represent the other green in your life: dollar bills. Because they resemble greenbacks (or folding money), the vegetable is a symbol for good fortune and prosperity. The New York Times article reveals that collard and mustard greens are both acceptable. You can also eat cabbage for a lighter substitute.

Smoked Pork: If you’re from the South, you know that pork is a main part of the culture. For this meal, the added pork is a reminder of a time when slaves were given less favorable portions of the pig for food.

Cornbread: These buttery sweet (or savory) skillet pies are said to represent gold — a lot like their color. A Southern Living article states that they became popular among Southerners during a time when wheat was scarce in the South.

Like all of the great comfort dishes, black-eyed peas have been passed down from generation to generation. Through grandparents, aunts and uncles, and even parents, the meal has survived the journey from Africa and the South. It has become a tradition that unites family members, young and old, with an appreciation of the past while eating for the future, literally.

As with most recipes, no two are the same. Some home chefs put their personal spin on switching seasonings and even ingredients. Others wouldn’t dare divert from their grandmother’s recipe. But no matter where you’re from, come the first of the year, plates everywhere will be piled high with black-eyed peas, rice, and greens (typically collards), with a piece of cornbread on the side. If you like the sound of this, you’re going to love the taste of these recipes:

Will you be eating this meal New Year’s Day? Let us know on Twitter @BritandCo.

(Photos via Brazilian Flair in the USA)

Yasmein James
Yasmein James is a food writer living in New Jersey, but her heart’s on the other end of The Lincoln Tunnel. When she isn’t writing, you can find her eating her way to the most authentic ethnic restaurants in her travels. And writing all about it on her lifestyle blog, She’s Facing Freedom.
new year
Healthy Eating
new year
The Conversation
Reviews:
More From Healthy Eating