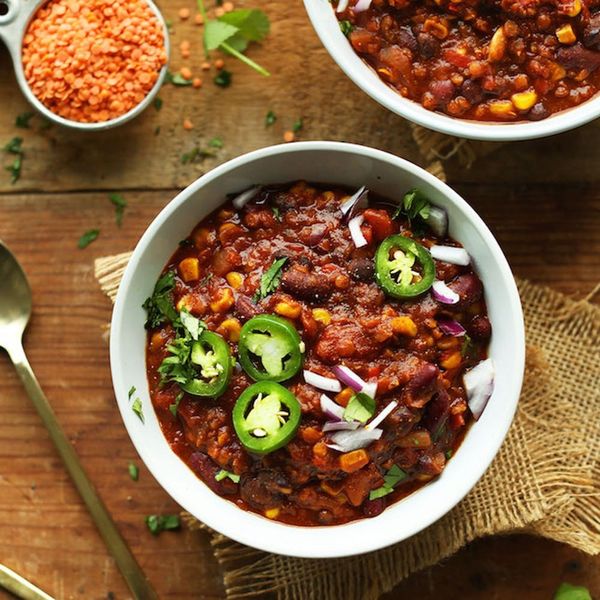 Even though veganism has become totally mainstreamed, there are still people who think that it consists of nibbling on salads like a rabbit. WRONG. With the help of ingredients like jackfruit and surprisingly convincing cheese, vegan cooking yields dishes that are just as comforting and indulgent as their carnivorous counterparts. Whether you're a Southerner who wants to work in some of your favorite classic recipes to your new lifestyle or you've just had a mad craving for killer mac and cheese, these 19 vegan soul food recipes will rock your world. Scroll on for drool-worthy dinner inspo.

There’s nothing more nostalgic than a warm and comforting pot pie. Use coconut milk to keep the vegan filling creamy and top with a fluffy cornbread crust that your spoon will sink right into. (via The Fitchen)

If you close your eyes and smell this peach pie, you almost feel like a kid again. Top a hefty slice with vanilla coconut milk ice cream if you really want to go all out. (via Happy Healthy Life)

You’ll be hard pressed to find a fried pickle crunchier than this one, vegan or not. Mix vegan mayo with chipotles to create a spicy dipping sauce to go alongside them. (via Wicked Spatula)

There’s nothing more Southern than fried green tomatoes — and we don’t mean the movie. The good thing for vegans is that they make a wonderful, hearty sandwich filling in the place of meat. (via Notions and Notations of a Novice Cook)

The next time you’re assigned dessert at a family function, these mini pecan pies will steal the show. They’re completely vegan, but everyone will swear that they’re not. (via Yummy Mummy Kitchen)

Little did you know, you would crave the satisfaction of a blue box of mac and cheese as an adult. When that craving hits, this vegan macaroni will do the trick — and you’ll eat a ton of veggies at the same time. (via The Green Forks)

Take part in the Southern tradition and serve this with a side of cornbread for a year of wealth and prosperity. (via Tori Avey)

Is it a dessert or is it a side? Whichever you choose, this recipe for vegan sweet potato casserole is on point. (via Nutritional Foodie)

If you thought vegan gumbo was impossible, think again. Using olive oil and flour still allows you to get that deep dark roux that’s necessary for a good gumbo. Add in a mix of beans and okra and you’ll be on the right track. (via Cilantro and Citronella)

You definitely don’t need meat products to achieve mouth-watering baked beans. Season with molasses, caramelized onions and bourbon for that rich flavor that tastes like they’ve been cooking all day. (via Connoisseurus Veg)

At the root of all soul food there are always collard greens. These rolls combine them with two other Southern favorites, BBQ sauce and black eyed peas. (via Vanilla and Bean)

When your dessert can double as your breakfast, that’s a great day. These individual cobblers are filled to the brim with blackberries and blueberries and are covered with a sweet crispy almond topping. (via Bakerita)

This is one of those classic recipes that you need to have in your arsenal at all times. Fix the biscuits and gravy together for breakfast or use the separate recipes with other dishes. (via The Simple Veganista)

One bowl of this chili and you will be absolutely stuffed. Top with a sprinkle of vegan cheddar shreds, red onion and cilantro before you start scooping. (via Minimalist Baker)

Soul food snacking wouldn’t be the same without fried okra. Save the extra calories for dessert and bake the bites in a crisp chickpea flour coating instead. (via Vegan Richa)

Anything fried and perched atop a waffle is a thing of beauty. Saturate this fried tofu with plenty of maple syrup and a sprinkle of sea salt to balance the sweetness. (via One Green Planet)

As if scooping a big spoonful of mashed potatoes wasn’t good enough, pour a ladle of mushroom gravy on top and you’ll be in heaven. Try kicking up the flavor a notch by mixing in a buttery head of roasted garlic. (via Vegan Huggs)

Who says all soul food is unhealthy? This bowl of grits, collards and black eyed peas is full of fiber, minerals and essential vitamins to keep you full and energized for hours. (via Vanilla and Bean)

If you can get your hands on purple potatoes, do so and immediately make this plum-colored sweet potato pie. Slice and serve with a dollop of vegan whipped cream for the perfect end to an epic soul food meal. (via The Endless Meal)
From Your Site Articles
Related Articles Around the Web
Paige Johnson
Paige is a blogger, food writer and culinary master from Louisville, Ky. She's a newlywed who's obsessed with dogs and renovating her 117 year old home. When she's not working on her blog — My Modern Cookery — you can find her binge watching F.R.I.E.N.D.S with a triple shot latte in-hand.
Dinner Recipes
Recipes
Dinner Recipes Healthy Recipes Recipe Roundup Vegan Recipes Vegetarian Recipes
The Conversation
Reviews:
More From Recipes