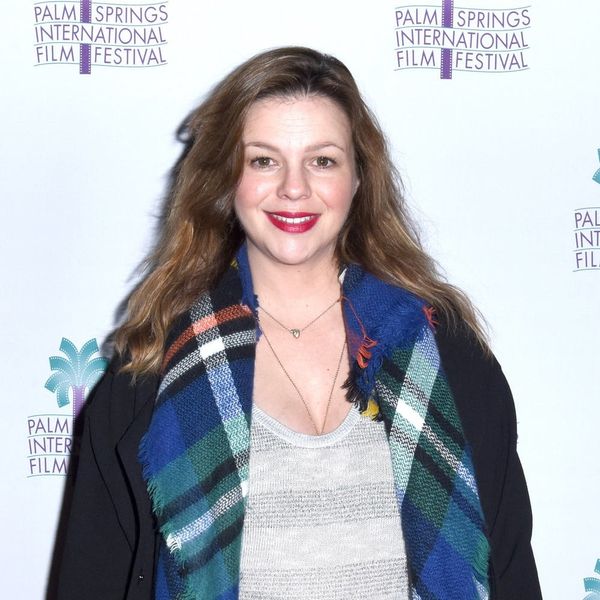 Sometimes, seemingly out of nowhere, a star emerges as a voice for justice. This weekend it was the actress Amber Tamblyn, who made waves with a powerful op-ed in the New York Times demanding that we believe women who share their stories about sexual harassment. Tamblyn’s op-ed went viral, and kicked off a super-important conversation along the way.

It all started last week, when the Sisterhood of the Traveling Pants alum went viral on Twitter for standing up to the actor James Woods. Woods had made a homophobic tweet about a new movie that depicts a gay relationship between a 17-year-old and 24-year-old man, implying that an onscreen relationship between an adult man and a minor somehow points to a lack of decency in the LGBTQ+ community.

In response, Tamblyn tweeted, “James Woods tried to pick me and my friend up at a restaurant once. He wanted to take us to Vegas. “I’m 16” I said. “Even better” he said.” Woods dismissed Tamblyn’s anecdote as a lie.

Rather than sit back and accept Woods’ accusation, Tamblyn shot back. Last Wednesday, she published an “open letter” to Woods in Teen Vogue, inviting the actor to refresh his memory about the alleged incident and confront, Tamblyn writes, his “history with women and girls.”

“The saddest part of this story doesn’t even concern me but concerns the universal woman’s story,” Tamblyn writes. “The nation’s harmful narrative of disbelieving women first, above all else.”

For the New York Times, she went a step further. Her editorial opens with a memory from her time on the show Joan of Arcadia. Tamblyn describes being 21 at the time, and a crew member who allegedly wouldn’t stop inviting himself into her trailer to harass her. Tamblyn writes that when she approached one of the show’s producers to report the incident, he dismissed her, saying: “Well, there are two sides to every story.”

For women in America who come forward with stories of harassment, abuse and sexual assault, there are not two sides to every story, however noble that principle might seem. Women do not get to have a side. They get to have an interrogation. Too often, they are questioned mercilessly about whether their side is legitimate. Especially if that side happens to accuse a man of stature, then that woman has to consider the scrutiny and repercussions she’ll be subjected to by sharing her side.

Tamblyn concludes by saying that the intimidation tactics of men in power are no longer enough to silence the growing number of brave women speaking out to break the cycle of harassment, denial, and victim-blaming.

“The women I know, myself included, are done, though, playing the credentials game,” she writes. “We are learning that the more we open our mouths, the more we become a choir. And the more we are a choir, the more the tune is forced to change.”

Ever since, both celebs and civilians online have responded with resound support:

Snap snap snap, this woman is telling some serious truth. "the more we open our mouths, the more we become a choir." https://t.co/kM4f8suahe

My life’s work is supporting women’s truth. And yet I have never seen this expressed so well. https://t.co/Y0Ovl91RRK

Kudos @ambertamblyn. For myself and my daughters, thank you for writing this. https://t.co/A4SUT3WFss

Amber Tamblyn I Believe you. Thanks for standing up for yourself. No one should have to put up with that! Love you Lady. Loved your show!

A powerful, poignant must-read.@ambertamblyn, some of us men hear your voice and love your choir. Keep singing.

Who’s a celebrity activist you find empowering? Tell us @BritandCo!