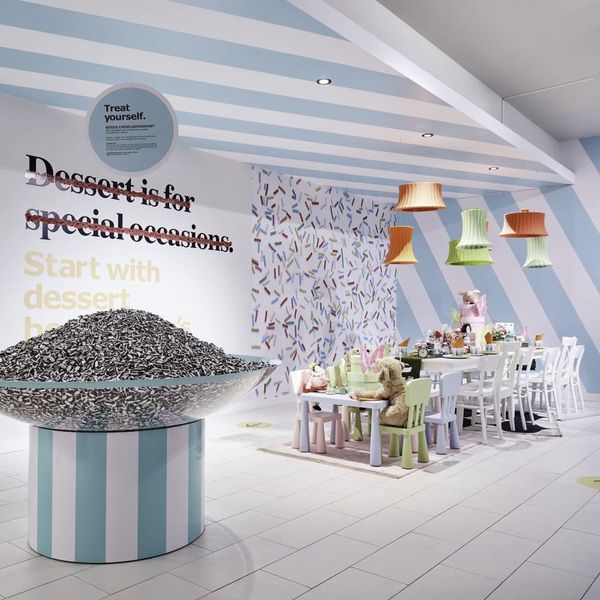 There’s something magical about online shopping. You see a picture of something on the internet, make a few clicks and — ABRACADABRA — it’s waiting for you at your front door. That’s kind of the approach IKEA took at a pop-up shop in Toronto last week — except it was magic IRL.

At the pop-up, IKEA tested out some wooden spoons that were much, much more than meets the eye. The spoons were outfitted with RFID chips (basically just used for tracking and digital identification) that allowed customers to tap on items, and they were automatically added to a digital shopping cart.

After a trip around the IKEA display kitchen tapping on items they liked, customers took their spoons to a magic screen that showed them everything they had desired. (Also: Don’t worry. Those delicious Swedish meatballs were also available for purchase via spoon.) They swiped a credit card and, presto-changeo, the items customers wanted were instantly delivered to their homes. Pretty rad, right?

The pop-up shop was also outfitted with Virtual Reality headsets, so customers could visualize the kitchen of their dreams Although there’s no word at the moment about the spoons coming stateside, we’re holding our breaths for the day we can shop with a magic wand and feel like the fairy godmother of our own lives.

What do you think of IKEA’s magical spoons? Let us know @BritandCo!

Cailey Rizzo
Cailey is a junkie for all things pop culture. She studied journalism and English literature at SUNY Purchase, then continued studying French cinema and literature at Paris IV Sorbonne. She currently lives in New York where she can often be found singing '70s music at karaoke bars.
IKEA
Tech
IKEA Shopping Tech News
More From Tech