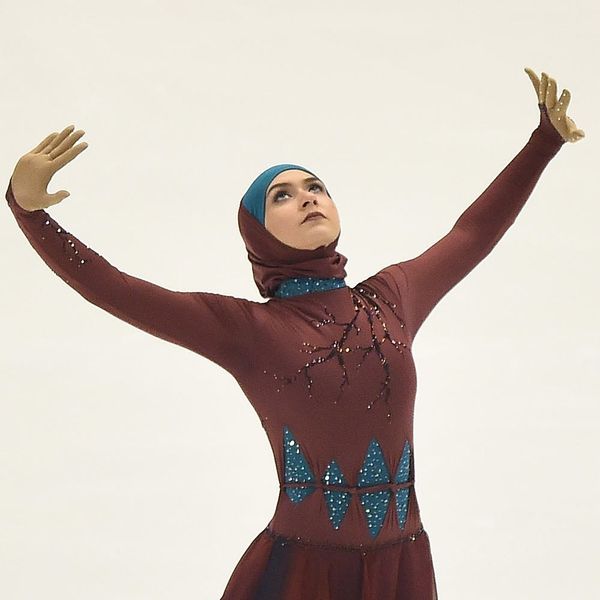 We’ve seen numerous groundbreaking moments for Muslims this year, from American Eagle’s denim hijab to the release of the first hijab-wearing Barbie as modeled after Ibtihaj Muhammad, the first Team USA member to wear a headscarf while competing at the 2016 Olympics. Now, professional figure skater Zahra Lari wants to join her ranks, aiming to make history again (she became the first figure skater to compete internationally in a headscarf back in 2012) as the first person to represent the United Arab Emirates at Winter Olympics — among other things.

The 22-year-old, who hails from the UAE, told CNN that she got her inspiration to skate from watching Disney movies. “I began skating when I was 12 years old, after watching the Disney movie ‘Ice Princess’,” she said.

Speaking with the publication via email, she recalled being a student and waking up at 4.30am to train, then going to class, then training again in the afternoon. She admits her experience was not one her family initially understood, saying, “My father felt that it went too much against our normal traditions and culture for a girl to compete in sports [so] we went to competitions only to cheer for my friends that were competing.”

Always do what you love 💗⛸

Eventually, she was given her dad’s blessing to compete (he’s since founded the Emirates Skating Club, which Lari’s mother is the CEO of), but the sport’s sartorial traditions proved to be challenging for a young woman hailing from a conservative nation where women are expected to wear wide-fitting robes called abayas.

Replacing see-through fabrics with opaque ones and covering her legs with thick leggings proved an acceptable middle ground. She topped off her costumes with matching headscarfs (like the history-making sports hijab she helped launch with Nike Pro).

Her unconventional dress has not been without its challenges, however: At the 2012 European Cup in Canazei, Italy, where she became the first to compete internationally in a headscarf, Lari lost points due to an outfit violation that was based on the perception that her headscarf might fall off and pose a danger to her safety.

Though she said she had no feelings of ill will against the ruling (“The judges at that time had never seen someone compete with it so they didn’t know how to score me”), she petitioned the ISU to change its rules. She eventually received a one-off exemption for the Nebelhorn Trophy (the qualifying competition for the 2018 Olympics) in Germany this past September, with the ISU telling CNN via email, “An assessment of the rule and whether it needs to be more specific for the future is ongoing.”

Lari didn’t ultimately qualify for the Olympics, but she’s still trying. As she told the outlet,, “My goals go beyond being the first person to represent the UAE at a Winter Olympics. I want to compete at the Four Continents Figure Skating Championships and the World Championships. These competitions are my current goal.”

We for one, have no doubt she’ll get there — you go, girl!

What do you think of Zahra Lari’s drive to compete? Tweet us @BritandCo.

Barbara Pavone
Barbara Pavone is a pop culture-obsessed writer based in beautiful (but ridiculously cold) Montreal, Canada. When she's not working, she's sipping on a Pimm's Cup and daydreaming about her celebrity hero, Saint West.
Celebrities
Diversity
Celebrities