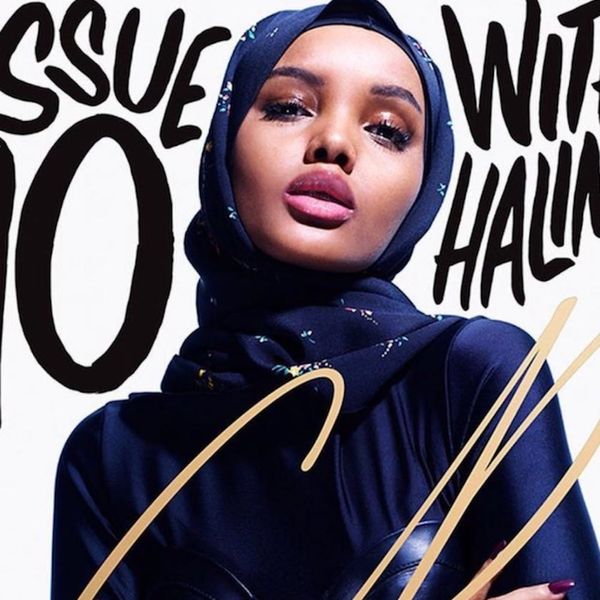 In celebration of Muslim Women’s Day on March 27, we’re taking a look at 10 landmark moments that involved the hijab in pop culture. Keep scrolling to read them in chronological order.

1.The first Muslim woman to accept an Oscar did so in a hijab (March 2014). Screen Arts and Cultures University student Zaineb Abdul-Nabi was one of six students who won the “Team Oscar” competition after entering a short video about her plans to contribute to the film industry.

@dolcegabbana has released their first Abaya collection! Oh wow! I am so happy that a major design house has decided to embrace this segment of people and design for them. I think it's a pretty bold but amazing move to make from a house like this and I'm hoping that they would innovate with the abaya but keep the modesty of it and at the same time I am hoping that other major design houses follow in this example 💚

3. H&M featured a hijab in its “Close the Loop” ad campaign (August 2016). For the first time ever, the fast-fashion retailer featured a Muslim model, 23-year-old Mariah Idrissi, wearing a hijab in a video asking customers to recycle their clothing.

Thanks @nygiants for honoring U.S. Olympians and Paralympians at today's game. I love my NY teams! 🏈🇺🇸 #TeamUSA #Gmen

4. The first American to compete in the Olympics in a hijab did so in 2016. Ibtihaj Muhammad was the first Team USA member to wear a hijab covering her head as she competed for a medal in the sabre fencing competition. She would go on to win a bronze medal.

6. A Minnesota teen competed in a beauty pageant (November 2016). Before Halima Aden was strutting her stuff on Kanye West’s Fall 2017 presentation, she was the first contestant ever to compete in the Miss Minnesota beauty pageant wearing a hijab and a burkini.

A huge and special Thank you goes out to the ones who lived through my late nights and craziness that went into making my dream a reality. My husband Mohsen My kids Amr, Elias and Munaya who accepted with love and patience my shortcomings that came with being a mom, wife and entrepreneur. who supported me through all my crazy ideas and innovations💕. I love you from the bottom of my heart ❤️ ❤️️❤️️#family #love #grateful #support #kids #husband #businesswoman #womensupportingwomen #blessed #inspiration #entrepreneur #alhamdulillah #believeinyourself #muslimah #stayhumble

7. Huda Quhshi opened the first women-only, hijab-friendly salon (January 2017). Beauty expert Huda Quhshi opened Le’Jemalik, a hijab-friendly salon in Brooklyn, New York that offers hair services, waxing, facials, manicures, pedicures, hanna and halal nails, as well as eyebrow shaping. “I once decided to go to a salon and when a man walked in I had to throw my head scarf over my wet hair and run to a back room,” she told Teen Vogue of her decision to open the women-only salon. “After that experience, I was like, ‘You know what? We can’t do this.’”

9. Hala Kamil wore a couture hijab on the Oscars red carpet (February 2017). This year at the Oscars, Syrian refugee Hala Kamil, the subject of the Oscar-nominated short documentary “Watani: My Homeland,” attended the show in a purple and black two-piece velvet gown with a matching purple hijab created by Brandon Maxwell, Lady Gaga’s stylist.

I think the beautiful thing about there being international Vogue's is that, as a fashion community, we are able to celebrate, and share with the world, different cultures. Being half-Palestinian, it means the world to me to be on the first-ever cover(s) of @voguearabia, and I hope that this magazine will show another layer of the fashion industry's desire to continue to accept, celebrate, and incorporate all people & customs and make everyone feel like they have fashion images and moments they can relate to... & learn and grow in doing so. ❤ Thank you @deenathe1st for your vision and for having me on this cover... by the incredible @inezandvinoodh - so much love.

10. Gigi Hadid wore a hijab on the cover of Vogue Arabia (March 2017). Conde Nast’s fashion bible Voguepremiered its Arabia edition earlier this month with half-Palestinian and Muslim model Hadid on the cover. It meant the world to her, but the decision was not met without controversy.

What will they say about you? Maybe they'll say you showed them what was possible. #believeinmore #nike

11. Nike created the pro hijab (March 2017). The sportswear giant announced that it was working on creating a hijab in lightweight polyester after Muslim athletes complained about wearing a traditional headscarf during competitions. It took 18 months to create and will go on sale next year. Earlier this year, Nike Middle East released a commercial that featured Muslim women wearing hijab as athletes and broke the internet (rightfully so).

What are you hoping to see next? Share your thoughts with us @BritandCo and hashtag #MuslimWomensDay!