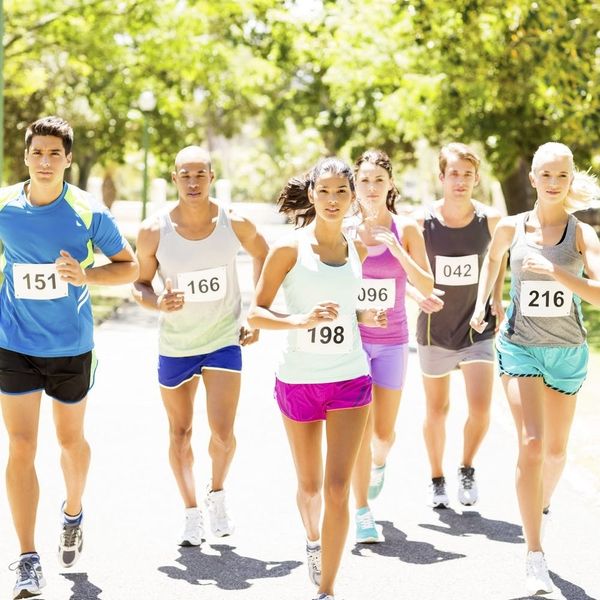 With the New York marathon coming up this weekend, runners all over the country have been training every day to get ready to crush 26.2 miles. But whether you’re prepping for your first marathon or only have plans to crush a Gilmore Girls marathon, we can all agree that one of the best parts of a race — as a runner or a spectator — are the motivational signs lining up the course. We’ve rounded up a handful that speak some serious truth juice. Scroll on to see them all.

1. Real Talk: Sure, there are plenty of men running the race who might not appreciate this sign, but try and find a woman who runs by it and doesn’t immediately think, “PREACH.”

2. Getting Galactic: Not a bad strategy. When you start to look at things in light years, miles don’t seem so bad.

3. Truth Bomb: Pretty sure this picture speaks for itself.

A post shared by FleetFeetClarksville (@fleetfeetclarksville) on Mar 2, 2015 at 4:40pm PST

4. Never Gets Old: Say what you will about Chuck Norris jokes (childish, so mid-2000’s), but they will never not be funny. Plus, it can’t hurt to channel your inner Chuck those last few miles.

Best of luck to everyone taking part in the Vhi Women's Mini Marathon & the @corkcitymarathon. If you hit that wall then we've a few words of encouragement to keep you motivated throughout! #marathontraining #VHIWMM #CorkMarathon #marathonsigns #marathonsupporters #running #marathon

5. Tinder Nightmares IRL: Just when you thought that terrible Tinder date you went on last weekend was behind you, BAM, your bestie on the sidelines reminds you they could literally be behind you.

6. Kids Say the Darndest Things: We don’t whose child this is, but we applaud you. Serious #momgoals here.

Who doesn't love a good race day sign? When we saw @shonahendricks's all too real moment with this #marathonsign from this weekend's #tcsnycmarathon, we just HAD to share it. Raise your hand if you can relate! 🙋🏽😂👌🏾 #Runkeeper

7. Positive Thinking: There’s something to be said about self-fulfilling prophecies. Honestly, you’re in this deep, you might as well enjoy the ride!

8. Train Like a Kardashian: Sure, we know it’s been over five years since the infamous blink-and-you-might-miss-it marriage, but when you’re wondering if it’s all worth it, a little reminder of all your hard work can’t hurt.

9. Stating the Obvious: Marathons are long. Like, hours of running. And exhausting as they may be, coming up with a clever AND unique sign can be tough too. Sometimes, keeping it simple is the best idea.

Kelsey Nelson
Kelsey Nelson is a born-and-raised Ohioan living life in South Carolina. She thrives at binge watching Netflix, contemplating what to order at the bar and running any trail or road she can get her feet on. In addition to being a Brit + Co contributor, she writes about southern pleasantries, DIY mishaps and more at North Living South. If she isn’t writing or running, she’s off adventuring with her husband Brad and their Lab/Dachshund mix, Gordy.
running
Health
running
More From Health