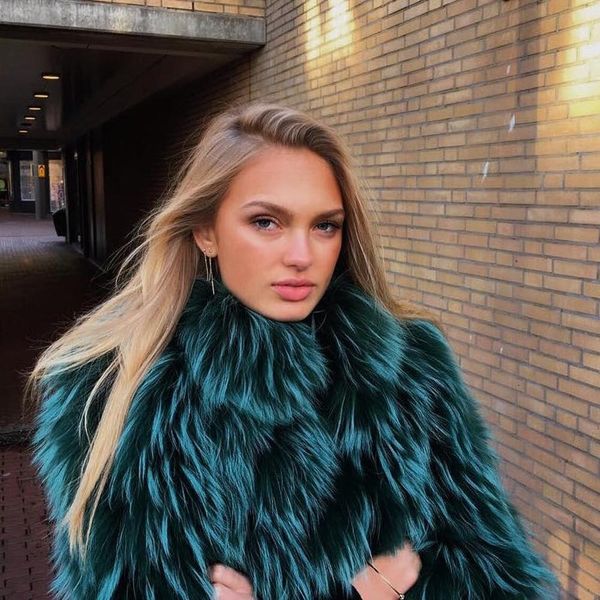 We really hate to be the bearer of bad news, but the world doesn’t completely revolve around Karlie, Kendall, and Bella (we still love you, though). With fashion month underway, it only seemed fitting to spotlight some fresh faces you should be following/stalking/worshipping on Instagram 24/7. Besides getting a preview of all the upcoming NYFW presentations (and a behind-the-scenes ticket to the star-studded after-after parties), just think of the fab off-duty street style inspo you’ll have at your fingertips. Keep on scrolling for 15 breakout models that — trust us — you’ll want to have gracing your Insta feed.

1. Emm Arruda: What a trooper. This 16-year-old Canadian model didn’t let a case of scoliosis get in the way of her modeling career. Post-spinal fusion surgery, Emm took to Instagram to document her recovery story — inadvertently becoming a role model to aspiring models (and those with scoliosis) everywhere with her message to dream big. Cast as one of Proenza Schouler’s breakout models during the spring 2017 cycle (and most recently walking in NYFW and LFW), you could say that Emm’s living out her wildest dreams.

2. Michelle Gutknecht: Whether she’s opening for Proenza Schouler or closing at Valentino, Michelle Gutknecht is quite a force to be reckoned with these days. The Polish model, most known for her wavy brown hair and girl-next-door image, is the ultimate cool-girl-in-training. This season, she lends her sartorial prowess to Coach, Tommy Hilfiger, and Michael Kors — just to name a few.

3. Romee Strijd: If anyone can give Gigi a run for her money, it’s Dutch model Romee Strijd. Not only is Romee a boss on the runway (she’s got the VS angel wings to show for it, natch), but she’s got that coveted model-off-duty lewk down pat. TBH, she could make a paper bag look très chic — what with her sultry pout, bombshell qualities, and all.

The Fan Want You To Wear Your Supermodel Love On Your Sleeve. So happy to be the face of @the_fan_of Check out the swag on they're website. Photos by @livincool

4. Adwoa Aboah: Adwoa Aboah is SO much more than just another pretty face in the modeling world, although her status as an HMIC (head model in charge) shall not be overlooked. Founder of Gurls Talk, a platform that seeks to empower young women, this Brit babe uses her previous bouts of depression to lift others up. The former face of Topshop and recent Vogue cover girl is also known for her risk-taking street style, signature freckles, and sleepy-eyed gaze.

5. McKenna Hellam: Do Prabal Gurung and Alexander Wang ring a bell? They should. These are just a few of the designers that have played a pivotal role in McKenna Hellam’s success. Making the big move from Georgia to NYC, this porcelain-skinned beauty took up modeling in hopes of following in her older sister’s footsteps. If only McKenna knew then she would be covering WWD and being cast to walk the model walk at Burberry (among countless other prestigious fashion houses).

6. Jessie Bloemendaal: Girl wins Instagram contest with Micha Models. Girl signs contract and starts landing modeling gigs with all the big-name designers. The rest is pretty much history. Meet Jessie Bloemendaal, the Dutch model with an overnight success story that makes breaking into the industry look almost too easy. But don’t be mistaken — this babe SLAYS on the catwalk.

7. HoYeon Jung(Chung): Once deemed Korea’s next top model on the rise by Vogue, Hoyeon Jung has *plenty* to offer the cutthroat world of modeling. (It only seems fitting that she placed second during her cycle of Korea’s Next Top Model.) For starters, she’s a bona fide street style MVP with an exuberant personality and cool-girl aura to match. Since making her stateside debut, this redheaded vixen has been featured in a number of high-profile campaigns and editorials — although, nothing tops being cast as a fresh face for Marc Jacob’s spring 2017 show.

8. Sonia Ben Ammar: Let it be known: Sonia Ben Ammar is kind of a big deal. If you don’t want to take our word for it, then just scope out her 240K (and growing) fanbase on Instagram. Starring in many a high-profile ad campaign, including but not limited to Dolce & Gabbana, she’s been dubbed by Vogue Arabia as the “Tunisian model you’re about to see everywhere.” And for good reason. Her shining star moment came when she made her runway debut at Miu Miu and the Chanel Métiers d’Art runway in Paris respectively.

9. Katie Moore: Hailing from Texas, Katie Moore isn’t about to let anyone steal her thunder. Her breakout moment came when she opened Alexander Wang’s fall 2016 show and EVERYONE took notice of her fiery red punkish bob. (Fun fact: Prior to her career-changing ‘do courtesy of stylist extraordinaire Guido Palau, Katie sported a long blonde mane.) Fast-forward to now, and we’re living vicariously through her every move as she continues to bring a tough-girl edge to the modeling world.

10. Yoon Young Bae: If you haven’t heard of Yoon Young Bae yet (nicknamed Mulan by her followers), then it’s only a matter of time before she’s a household name. Her heart-shaped face and doll-like features are what initially got her noticed in her hometown of Daegu, South Korea. Though she’s no stranger to the international modeling scene, her big break came after walking Prada’s men show and shortly thereafter starring in a campaign for the fashion house. Not bad for someone whose previous claim to fame was modeling at Seoul Fashion Week.

11. Ellen Rosa: This Brazilian-born model with gorgeous hazel eyes and striking features is a busy bee. During the spring/summer 2017 season alone, she walked 29 shows — starting with her debut at Alexander Wang (Alex knows how to spot talent). If that doesn’t say something about her staying power as more than just a “model of the moment,” then we don’t know what does. Her ability to channel ladylike-chic at Tory Burch and relaxed-utilitarian at Michael Kors sheds light into her versatility as a top model.

12. Imaan Hammam: Who runs this world? Imaan Hammam, a Dutch model with Egyptian and Moroccan roots is currently on fire. Bringing her A-modeling game like “whoa,” Imaan already has several mega ad campaigns under her belt for Céline, Givenchy, and DKNY — and that’s not including her proven track record on the runway. With her killer bone structure, flawless skin, and envious brows, it’s no wonder why the world is Insta-obsessed with Imaan. Pssst: We are too.

13. Cara Taylor: Cara Taylor is that girl that everyone wants to be. Plucked straight out of high-school — and discovered through Instagram, no less — she’s the model of the moment that’s got err’body talking. This Alabama native possesses an It factor that can’t be taught. Maybe it’s the fact she’s only freaking 15 years old, or perhaps it’s her unassuming tomboy image that’s got us glued to the screen. Having the opportunity to shoot with acclaimed photographer Steven Meisel and perfect her walk at Alexander Wang is no small feat. Get it girl!

14. Mayowa Nicholas: Stop and strike a pose, why don’t ya? Bringing some much-needed diversity (and somethin’ fierce swagger) to the catwalk, newcomer Mayowa Nicholas is not only the first Nigerian model to be featured in a Dolce & Gabbana ad campaign, but she’s practically a seasoned fashion week regular at this point. To think she was only just discovered two years ago after winning the Elite Model Look Nigeria competition. Sheesh!

Now that's a show! We had so much fun last night 🌙🎢🎠🎡✨ #TOMMYXGIGI #TOMMYNOW

15. Blanca Padilla: B is for Blanca Padilla. Not many models can say they were accidentally discovered on a subway platform in Milan, but then again, Blanca’s not just anyone. Besides rubbing shoulders with Gigi at Tommy Hilfiger, this Spanish top model and Victoria’s Secret Fashion Show alum has nabbed the cover of Vogue Spain, starred in ad campaigns for Cerruti 1881 and most recently graced the catwalk at Ralph Lauren and Prabal Gurung.