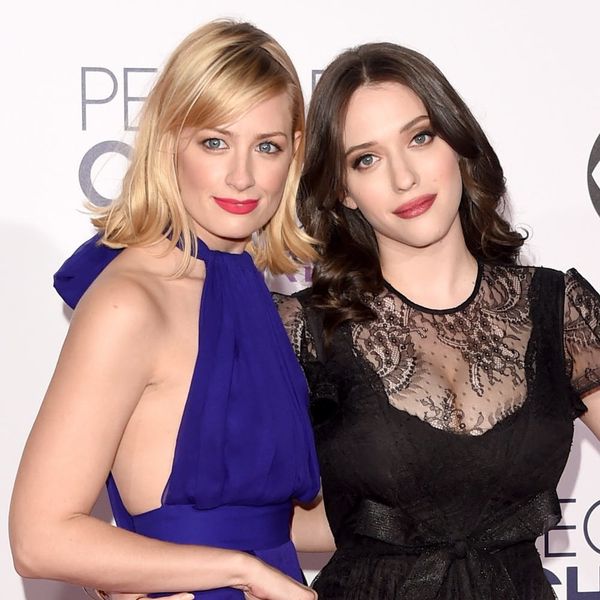 Beth Behrs and Kat Dennings may no longer play BFFs Caroline Channing and Max Black on 2 Broke Girls, with the series getting the boot this past May, but the bond they shared on the show remains strong. So close, are the girls, in fact, that Dennings will serve as one of Behrs’ bridesmaids in her upcoming wedding to Man Men star Paul Kinsey!

In a group shot shared to Instagram, the Big Mouth star revealed that she spent her Easter Sunday pulling ‘maid duty as she “[showered] @bethbehrs with all our love today.”

Bridesmaids! 💍💝 Showering @bethbehrs with all our love today

The bride-to-be, who looked stunning in a floral-printed off-the-shoulder cream mini-dress and a bridal sash, shared some snaps from her special day, which was organized by Emily and mom, Maureen.

“Man, I really felt the love today,” the 32-year-old wrote. “Thank you @emilybehrs and @maureenbehrs and all the amazing women in my life for the most gorgeous shower and most special day! I love you all so much!”

Man, I really felt the love today. Thank you @emilybehrs @maureenbehrs and all the amazing women in my life for the most gorgeous shower and most special day! I love you all so much!

She also showed off the shower gift she received from her onscreen bestie via Instagram stories with a shot of a gilded vintage tea set, saying, “Obsessing over my new vintage tea set from @katdenningss.” Awww!

Behrs met her fiancé circa 2012, when both actors starred in a short film for Funny or Die called The Argument. The couple became engaged in July 2016.

Are you excited to see the RL Caroline and Max reunited? Share with us over @BritandCo.

Nicole Briese
Nicole is the weekend editor for Brit + Co who loves bringing you all the latest buzz. When she's not busy typing away into the wee hours, you can usually find her canoodling with her fur babies, rooting around in a bookstore, or rocking out at a concert of some sort (Guns N' Roses forever!). Check out all her latest musings and past work at nicolebjean.com.
Bridal Shower
Celebrity News
Bridal Shower Celebrities Friends TV
More From Celebrity News