20 Hottest Reads to Add to Your Summer Reading List 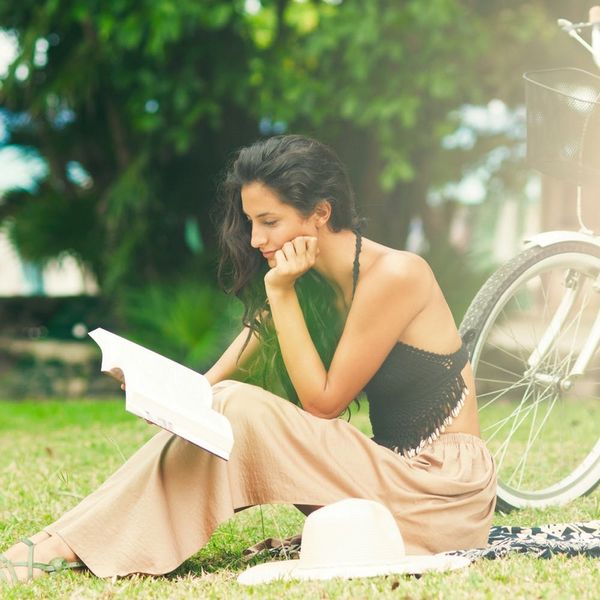 Summer is all about relaxing with your favorite things: beach days, sweet treats, BBQs and (of course) books! Whether you’re on the hunt for a body-positive beach read or you’re taking your cue from Emma Robert’s reading list, there’s no way to go wrong. Look no further for your next poolside read — we’ve got you covered with 20 books to throw in your beach bag.

1. One True Loves by Taylor Jenkins Reid ($10): When Jesse, the love of Emma’s life and high school sweetheart, goes missing on their first wedding anniversary, her world ends. Years later, when she’s finally managed to fall in love again and is engaged to Sam — surprise! — Jesse shows up. Taylor’s latest is a breathtaking love story.

2. 25 Sense by Lisa Henthorn ($10): As a young woman in your twenties, everyone expects you to be a responsible adult; however, this is a time where a lot of women feel lost. Claire Malone is one of these women. When she moves to New York City, she plans to gain experience in television writing, yet her plan rapidly changes when she sleeps with her married boss, Sean. As things escalate quickly, Claire struggles to keep herself together, and she begins to wonder if she can break away from Sean without ruining her fragile, young career, and if she will ever stop making destructive decisions.

3. The Assistants by Camille Perri ($17): The assistant life has long ago lost its charm for overeducated, underpaid Tina Ford. When she sees a chance to hijack her boss’s expense account and pay off her student loan debts, it seems too good to pass up. This hilarious book is a good reason to call in sick to work (and we won’t judge if you entertain your own revenge fantasy on your boss).

4. So Close by Emma McLaughlin and Nicola Kraus ($12): Amanda is a guarded young woman from the trailer parks of Florida searching for a way out. She has finally found someone who can be her ticket out of there: an ambitious lawyer-turned-politician and his smart, determined wife. But when things aren’t as they seem, Amanda has to decide if loyalty or ambition will get her closer to success. This political coming-of-age page-turner is a must-have companion for your summer travels.

5. Will You Won’t You Want Me by Nora Zelevansky ($17): You know those people who peak in high school? Well, Marjorie Plum is dismayed to find she’s one of them. Fired from her job and out of an apartment, she has to figure out how to get her life back on track. When her questionable childhood crush and her broody new boss both show interest in her, she has to figure out what “back on track” really looks like.

6. Homegoing by Yaa Gyasi ($27): This is a stunning novel about the lives of two half-sisters, born in 18th century Ghana, and the lives of their many descendants in both Ghana and America. From the plantations of the American south to 20th-century Harlem jazz houses, Gyasi gives us memorable, flawed characters that remind us of the way we are all interconnected.

7. First Comes Love by Emily Giffin ($20): The relationship between sisters can be loving, troubled and contentious, and often all three. Giffin weaves a completely relatable story of two sisters who followed very different paths, but now must confront the issues that divide them and come to terms with their own life choices.

8. Don’t You Cry by Mary Kubica ($16): Esther Vaughan disappears from her downtown Chicago apartment without a trace. Meanwhile, a mysterious woman turns up in a Michigan town an hour away from Chicago. Their stories collide in this page-turner about the line between suspicion and obsession, and it will keep you guessing until the very last page.

9. The Lucidity Project by Abbey Campbell Cook ($10): As a last-ditch attempt to treat her lifelong depression, 25-year-old Max agrees to enroll in a health and wellness program at a resort in the Caribbean. This is no ordinary program, though. The residents enter each other’s dreams and work through their problems in a magical, transformative journey that awakens them to who they really are. Abbey Campbell Cook delivers a new age fiction tale that’s perfect for your trip to the coast.

10. Everybody Rise by Stephanie Clifford ($10): After years of not quite belonging to the “in crowd,” 26-year-old Evelyn Beegan now finds herself smack in the middle of New York’s most elite, Gossip Girl-esque world. And despite her best efforts, she loves it there. So when her lawyer father is indicted, she tries desperately to keep up appearances in this juicy, scheme-filled tale of misguided ambition.

11. In the Country We Love: My Family Divided by Diane Guerrero ($16): From the star of Orange Is the New Black and Jane the Virgin comes this story of a 14-year-old girl who finds herself alone in the US when her parents are deported while she’s at school. Guerrero’s account of the resilience that ultimately led her to a successful acting career is moving, heartbreaking and inspiring.

12. The Sweetheart Deal by Polly Dugan ($16): A joke becomes a promise one drunken night between best friends Leo and Garret: If anything ever happens to Leo, Garret will marry his wife, Audrey. 12 years later, Leo is dead, and the feelings between Garret and Audrey are becoming more than platonic. But when Audrey finds out about the pact, she’s devastated. Can she deal with her grief and find love again?

13. Saving Abby by Steena Holmes ($15): Clare Turner’s greatest wish has always been to be a mother, but after six years of trying to conceive with no success, she’s finally accepted that she can’t get pregnant. And then she does! Happiness is short-lived, though, because Clare receives a medical diagnosis that forces an impossible choice: Should she save her own life, or save her child’s?

14. The House of Bradbury ($10) by Nicole Meier: A frustrated writer, a Hollywood starlet and the old house of a famous writer collide in this charming tale of accidental friendships and second chances. This is a great choice for that delicious afternoon read in the summer sunshine.

15. All Is Not Forgotten by Wendy Walker ($22): When local girl Jenny Kramer is attacked at a local party, she’s given a drug that erases her memory of the attack. This heart-pounding thriller proves that memory can’t be trusted as a small town crumbles under the weight of its secrets and the question of what really happened that night.

16. Hunger: A Memoir of (My) Body by Roxane Gay: Following the long-running success of her Tumblr, Roxane Gay’s candid, vulnerable work explores how she learned to accept her “wildly undisciplined” body as one that can love and be loved. This powerful book deals with our shared anxieties over pleasure, appearance and health in a searingly honest way.

17. The Choices We Make by Karma Brown ($16): Summer can be a wonderful time spent with friends and family, and in Karma Brown’s latest novel, The Choices We Make, we are taken on an incredible journey of friendship and parenthood. Best friends Hannah and Kate have been inseparable since the fifth grade and have shared their lives together. While they’ve always been thick as thieves, Hannah struggles with not being able to have kids and is envious of Kate’s perfect family complete with two daughters. As Hannah explores other options, Kate makes the decision to be Hannah’s surrogate and use one of her own eggs to do so. But an unexpected turn of events leaves them reeling in this touching and emotional story.

18. You Will Know Me by Megan Abbott ($20): 15-year-old Devon is a star gymnast and an Olympic hopeful, and her parents have dedicated their lives to helping her achieve her potential. Then a violent death in the gymnastics community right before a big competition illuminates its dark corners and brings to light the pressures put on young girls’ bodies. This is a gritty, beautiful novel you won’t be able to put down.

19. Untethered by Julie Lawson Timmer ($16): Char Hawthorne loves her husband, her stepdaughter and her job. When her husband dies, the close bond she’s developed with her stepdaughter suddenly seems less close. This is a story about the way modern families can be formed when people find their own way to each other.

20. A House for Happy Mothers by Amulya Malladi ($15): Priya has almost everything — a great job, a loving husband and a Silicon Valley home — but she can’t have the baby she desperately wants. Her search to become a mother leads her to Asha, a Southern Indian woman who reluctantly decides to become a surrogate to finance her son’s education. This thoughtful novel examines India’s surrogacy industry with honesty and grace.