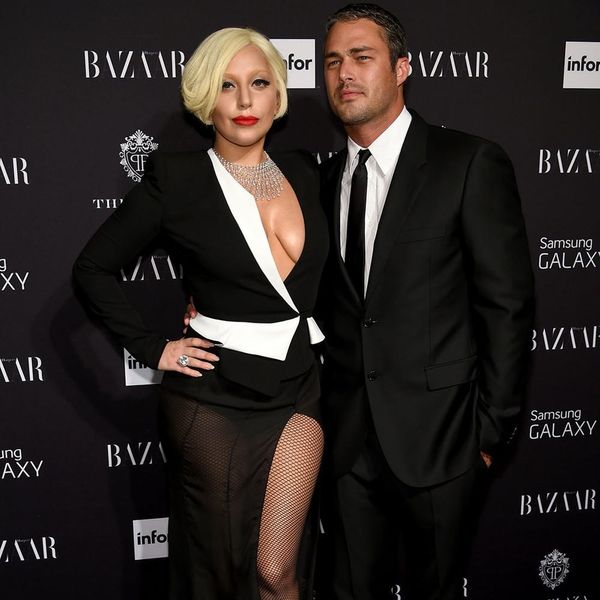 Well folks, you may have had a romantic Saturday full of red roses and candy, but Lady Gaga’s Valentine’s Day still probably beats yours. The popstar took to Instagram this weekend to debut an epic, heart-shaped engagement ring alongside the caption, “He gave me his heart on Valentine’s Day, and I said YES!”

Gaga and her fiancée, Taylor Kinney, met very fittingly, on the set of her music video, “You and I” back in 2011 – where she actually sported her mother’s wedding gown in a few scenes. Looks as if some nuptials were destined to happen.

Rumors of the couple’s engagement have been swirling ever since Gaga posted a tweet this past Christmas that read, “Merry Christmas monsters, today has been the happiest day of my life. Have a peaceful and healthy holiday.” Since then we’ve heard they went and got secretly married and even that they’re planning a second wedding this summer, but all we can focus on right now is that massive, heart-shaped ring!

The couple headed over to Gaga’s parent’s restaurant in Manhattan this past weekend to share the news (and rock) with family and friends. It looks as though Kinney is just as excited about the engagement, he posted this pic of the two of them (presumably at the restaurant) with the caption, “she said YES on Valentine’s Day.”

What crazy wedding plans do you think the songstress has up her sleeve? Share with us in the comments below.

Cortney Clift
Cortney is the senior writer and special projects editor at Brit + Co. She typically covers topics related to women's issues, politics, and lifestyle. When she's not buried behind her computer you'll find her exploring New York City or planning her next big adventure.
Engagement
Party
Engagement Valentines Day
More From Party